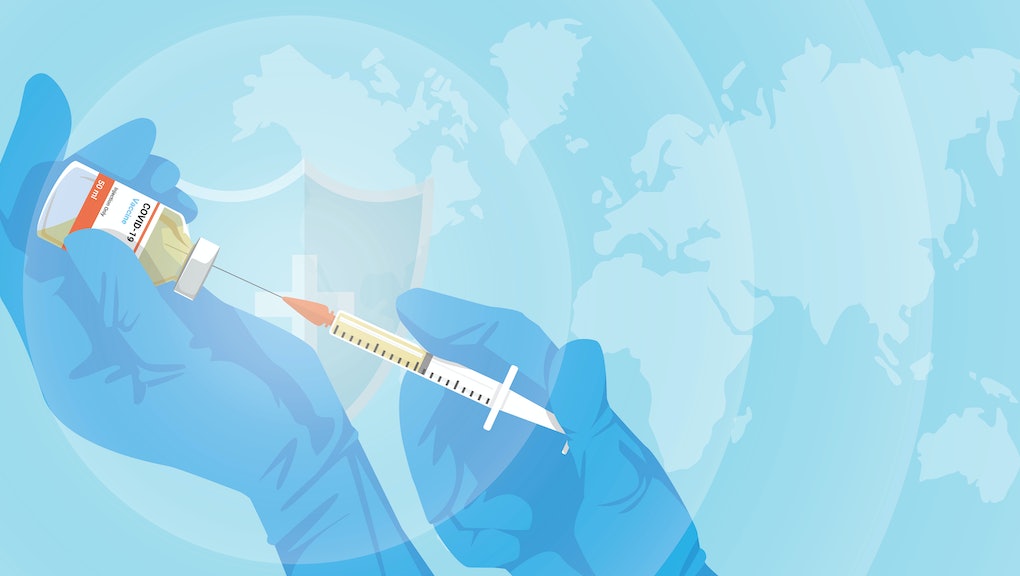 "How can I trust them?": Inside Black Americans' very justified vaccine skepticism

On Wednesday, the United States reported over 2,800 deaths due to coronavirus in a single day. This grim figure marks the highest single-day death count ever recorded in the U.S. In November alone, the U.S. reported over 4 million coronavirus cases, more than what most countries have seen all year. With the federal government failing on multiple levels, some Americans are looking to one new savior: a coronavirus vaccine.

This week, the United Kingdom became the first country to approve U.S.-based Pfizer and its German partner BioNTech's vaccine, with plans to roll out shots next week. While the U.S. hasn't reached a decision as fast, an advisory committee of the Food and Drug Administration will meet on Dec. 10 to determine whether or not it will grant emergency approval to Pfizer. The decision will then go on to the FDA itself. Along with Pfizer's vaccine, scientists are reviewing data from Moderna.

Talk of a vaccine is one thing. Watching as it becomes a reality is another, and the thought brings renewed hope for some — but not necessarily the communities most impacted by the pandemic. Per the COVID Racial Data Tracker, part of The Atlantic's COVID Tracking Project, Black people nationwide are dying at two times the rate of white people, for a current total of 47,704 Black lives lost. Black people account for nearly 20% of deaths in the U.S. where race is known.

The vaccine is being "position[ed] as everyone's savior — yet COVID isn't killing everyone."

Yet many Black communities are warily eyeing news of an approaching vaccine. Seynabou Niang, a public health professional in Georgia, told Mic she has a lot of mixed feelings about how the vaccine is being "position[ed] as everyone's savior — yet COVID isn't killing everyone." She continued, "I don't think I will be [thrilled] until I see a strategic plan that centers the experiences of marginalized folks, namely Black and brown people. I think the vaccine talk, like COVID, is more political than public health, and that's the sad part." Marginalized communities have suffered from coronavirus in greater numbers, and a public health crisis affects them disproportionately because they are often underinsured if not uninsured because of existing job and wealth disparities.

But right now, strategic talk mostly centers around who will be vaccinated first. This week, a Centers for Disease Control and Prevention panel recommended that health care workers and staff at long-term care facilities be prioritized, but STAT reported senior leaders in the Trump administration are saying adults over 65 should be given first access. While Rep. Ayanna Pressley (D-Mass.) tweeted last week that a vaccine strategy must also "combat Black Americans' vaccine fears [and] skepticism", there has been little to no official effort to do so.

This lack of effort stands despite the fact that it's not difficult to find skepticism regarding a coronavirus vaccine in Black communities. Shawn Demmons, a trans activist who works in the University of California at San Francisco's Center for AIDS Prevention Studies, told Mic, "Definitely within my social circles and my family there has been lots of discussion about apprehension to taking the vaccine. Mostly folks express distrust around [the] safety of the vaccine especially given that it was produced so quickly and under the current president."

Similar sentiments were shared by Amira, a high school senior in the South who requested to remain anonymous. Amira told Mic she is "hesitantly optimistic" about the vaccine, but "a little worried about the quality since it's been rushed." Patrice Lawrence, a co-director of the UndocuBlack Network, was more blunt: "I don't trust any vaccine released under the Trump administration," she told Mic. "They are not listening to scientists and have not been. How can I trust them?"

It is easy to dismiss this skepticism and mistrust as based in nonsense or conspiracy theories. However, the responsibility for this mistrust lies entirely with the medical system and the United States at large, as both have proven they do not deserve Black people's trust. As Demmons pointed out, people are living under an administration "that has attacked Black people, Indigenous people, people of color, and other marginalized folks through racist, sexist, and homo/transphobic polices and laws, and an administration that routinely espouses overt and covert anti-Blackness."

Lawrence agreed, saying the compound discrimination has poisoned the well. "My aunt sent a picture to me ... on WhatsApp on how to decline a vaccine," she said. "[My family] takes other vaccines so I think it is something about COVID-19, how unknown it is, how neglected we feel as Black people. ... No money for stimulus checks, tests are hard to get, no paid time off from work if you don't have a cushy office job. All this makes us distrust anything that could come next."

The problem goes far beyond the Trump administration. Black communities have not forgotten the U.S.'s multiple legacies of bodily violation and harm against Black people. The infamous Tuskegee syphilis experiment, a 40-year experiment to observe untreated syphilis in Black populations, is an infamous example. The 600 men involved were unaware of the experiment's purpose and lied to throughout the process. By the end of it, 128 of them had died of syphilis or its complications, 40 had infected their wives, and 19 of their children acquired congenital syphilis.

The Tuskegee syphilis experiment's lasting impact on Black communities is so strong that it was mentioned by every person Mic interviewed for this story. However, Niang also pointed out that vaccines specifically don't escape history unscathed either. "The whole science behind vaccinations as a preventive measure was born out of white pseudoscientists taking healthy stem cells from a deceased Black woman named Henrietta Lacks. We are still living off of the labor of Black people, especially Black women."

In 1997, then-President Bill Clinton apologized for the Tuskegee syphilis experiment, saying, "The United States government did something that was wrong — deeply, profoundly, morally wrong." And in 2013, the National Institute of Health was celebrated for reaching an agreement with Lacks's family that would make her genome data accessible only to those who apply and are granted permission. However, neither of these acts make up for the harms committed, nor do they erase the untold numbers of Black people who have been used and abused by the medical industry without any recourse.

For many Black people, these examples of medical harm are deeply personal, too. They don't just come from books and search engines but from family members whom they love and care for. The Black maternal mortality rate, which is disproportionately high, continues to haunt communities. Earlier this year, the CDC released data for the first time in a decade that showed the maternal death rate for Black women was 37.1 deaths per 100,000 live births — more than double the rate for white women and more than triple the rate for non-Black Latinas.

Then there are the more isolated but still traumatic injustices. Demmons relayed a story of his mother, who was born in 1936 and grew up in the South. During a visit to the dentist as a young adult, the doctor pulled her tooth without any type of numbing agent. "This traumatized her to the extent that for the remainder of her life she would avoid the dentist entirely," Demmons said, "which led her to have serious gum disease later in life."

"I live in a place where people have relatives that were affected by the government treating Black people as lab rats, and they are skeptical because of that medical history," Amira told Mic. But specifically, she added, "with a lot of African Muslims, they are wary of vaccines as they are scared it's a ploy to make them infertile as a means of population control."

African Muslims are criminalized through anti-Black Islamophobia that defines both prisons and the immigration system. Given this, fears of forced sterilization and population control are rooted in U.S. history. Throughout the South, the widespread sterilization of Black women was referred to as the Mississippi appendectomies; in Puerto Rico, the U.S. sterilized about one-third of women. Even in the present day, immigrant women detained by Immigrations and Customs Enforcement say they had forced or unnecessary hysterectomies. Reports of forced sterilization also arose from a California prison in 2013.

"Making the vaccine free of cost goes without question."

So, what can be done to address all of this valid distrust in a vaccine distribution strategy? After all, a vaccine's success depends on the majority of people taking it, to build a sort of herd immunity that protects the vaccinated people as well as those who could not be inoculated.

Firstly: The onus lies entirely on the government to make this right, and not on the communities that it has harmed. Demmons said it will take a "huge public health campaign, possibly utilizing social influencers or other trusted personalities," along with community education that includes laying out data regarding the vaccine's development and explaining vaccine safety in layperson's terms. Amira also pointed out that officials need to address that many Black people cannot access quality medical care and, for Niang, "making the vaccine free of cost goes without question."

Frankly, any attempts to address Black communities' skepticism of the medical industry should have begun in earnest long before the pandemic. As it is now, even if a vaccine does not arrive until the end of 2021 — and most estimates put wider availability much earlier than that, likely next summer — it's hard to imagine how there is enough time in a single year to adequately respond to multiple generations' worth of violence. Still, Lawrence said that in any campaign, "[The government] would have to themselves acknowledge the harm they have done to Black communities since this pandemic hit and the harm that has been done historically."

However, for Niang, even that would not rid her of a pressing question. "I represent both sides, as a Black woman who will probably never trust this medical system, but also as a public health professional that aims to do more preventative actions rather than interventions," she told Mic. "Most conversations I participate in talk about how the vaccine is one of the many vehicles of politicizing our health in ways that do not prioritize us."

But, she asked: "How can you say you care to cure someone when you didn't care enough to protect them from it in the first place?"