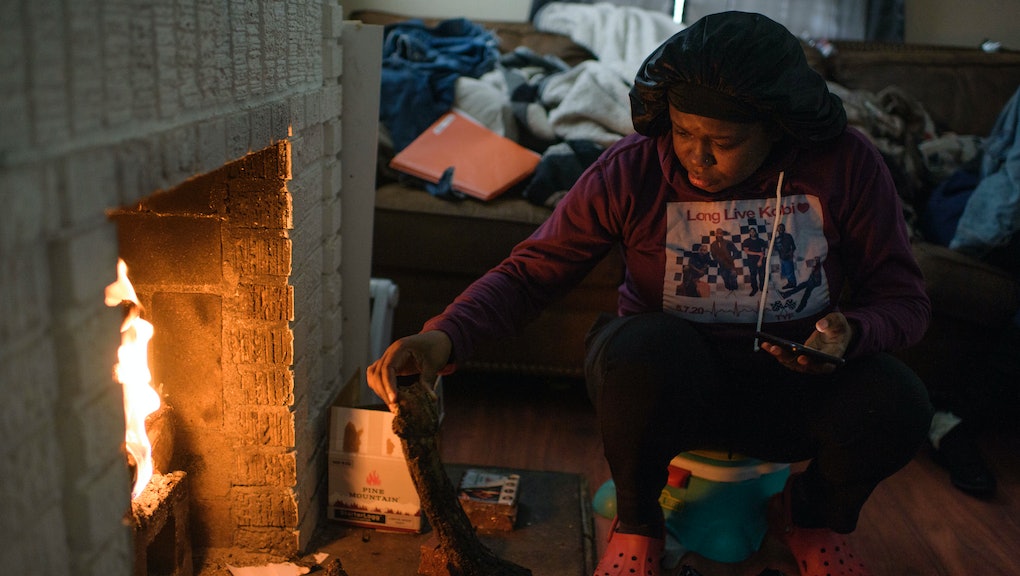 A woman builds a fire to heat her home in Houston, Texas, on Feb. 17. [Mark Felix for The Washington Post via Getty Images]

How can Texas avoid catastrophe the next time extreme weather hits?

The unprecedented cold weather that plagued Texas earlier this month resulted in tragedy. Millions of people lost power, thousands were forced to endure freezing temperatures with no relief, and at least 80 people died due to the cold. But much of that suffering could have been avoided. Texas's power grid was uniquely unprepared for the extreme weather, in part because of a lack of foresight and in part because it is largely isolated from the rest of the country and not subject to federal regulation. And despite Republican attempts to disingenuously pin the problem on renewable energy sources, the fact is that Texas's grid failed because of choices Texas's leadership has made. And that begs the question: What's next for Texas?

The storm that hit Texas brought the state its coldest temperatures in more than 100 years. But it's not like nobody saw this coming. In 2011, federal regulators warned Texas that its grid could not be counted on in freezing temperatures. Some state politicians proposed legislation to create fail-safes and backups in response, but these efforts were ignored by Texas leadership; the state has been under Republican control in all three branches of state for nearly two decades. On Wednesday, it was revealed that Texas's grid was mere minutes away from total collapse.

"Texas has no choice but to respond to the climate crisis we face," says John Moore, the director of the Sustainable FERC Project, a partnership of national, state, and regional organizations working to expand clean energy. "As we’ve seen around the country, while some may try to deny that burning fossil fuels is causing climate change, political leaders have responded to the stronger storms, hotter heat waves, increased flooding, and, yes, more severe winter cold snaps."

"Following this catastrophic collapse of the power system, Texans will be demanding a more resilient and responsive power grid," Moore tells Mic. "And political leaders will need to deliver it."

So how can the Lone Star State gird its energy system against inevitable future disasters? Ted Kury, the director of Energy Studies at the University of Florida's Public Utility Research Center, tells Mic that one of the most important actions would be to have generators on hand that are specifically prepared for extreme weather events. Of course, because of Texas's energy market, which is largely isolated from the rest of the country, this is a challenge, Kury notes.

"It's a drawback of competitive wholesale markets like Texas. Take two generators, identical in every way except one invests in weatherization. Its costs are going to be higher, it's probably going to offer a higher price in the market and risks being out of the money," Kury explains.

In other words, weatherized generators will be at a market disadvantage any time there aren't extreme conditions because they're more expensive to maintain, and thus the energy they provide must be sold at a higher price. For consumers, that means that buying from a weatherized generator appears more expensive than the alternative, and without any clear benefit — except, of course, for when disaster hits. But the way Texas's grid is set up, with wholesale energy costs, consumers will almost always gravitate toward the cheaper option because most of the time, they won't be facing such extreme conditions.

But it simply isn't a choice people should have to make. Sylvester Turner, the Democratic mayor of Houston and a former state legislator, proposed a law that would require the Electric Reliability Council of Texas (ERCOT), the organization that is responsible for more than 90% of the entire state's electrical load, to have adequate reserve power in place to prevent blackouts. The bill never got a hearing. Now, after last week's disaster, Turner is once again pushing lawmakers to consider the legislation.

But that's only a partial fix. The truth is, Texas needs systemic change to modernize its grid. Kury explains that at least some of the power shortages during the storm were due to Texas's "near-total isolation from the Eastern and Western Interconnect," which are the synchronous grids that serve huge swaths of the country. While Texas is largely energy independent, this month's emergency conditions showed the shortcomings of that approach. "Given record energy demand, fossil fuel plants could not secure enough gas to power all the gas power plants and heat all the homes," Michael Lee, CEO of Octopus Energy, tells Mic.

According to Lee, Texas was unable to tap into the energy supply of neighboring states because of its decision not to participate in these larger, federally regulated grids. Instead, the state was forced to pay massive prices for extra power to meet increased demand, as more people cranked the heat than usually do on a February day in Texas. Providers passed those extra costs onto residents, which resulted in some Texans being hit with surprise energy bills for tens of thousands of dollars.

In another state, one that is part of the Eastern and Western Interconnect, officials could have simply drawn power from a neighboring state's grid to meet demand without having to buy it externally and jack up the costs for residents in the process. But Texas's insistence on isolating itself to avoid federal regulation meant this wasn't an option.

Perhaps most important for Texas going forward is the task of weatherizing its infrastructure to survive future storms. The plants need to be reliably capable of performing, even when the temperature drops below freezing; cold temperatures are uncommon in Texas, but they're not unheard of, and certainly not in the era of climate change-exacerbated extreme weather.

"In this extreme weather event, not one single source of energy was immune to the freezing cold temperatures," Lee explains. "Because Texas's grid is built for a semi-tropical environment, not an arctic one, the lack of weatherization resulted in a failure of the grid." It also resulted in additional pollution once systems were operational again, as the plants experienced major leaks of dangerous chemicals because they were not built to survive in the conditions the state faced.

"How do you respond next year when the crisis passes and the people ask, 'The weather is calm and the system is fine, why am I still paying more for my electricity?'"

The cost of weatherizing the infrastructure across Texas will be massive — but the fallout from the storm certainly wasn't cheap, either, racking up around $50 billion in damages, per an AccuWeather analysis. Kury says state leadership will have to ask themselves two things: "What is the chance of something bad happening again, and what are people willing to pay to mitigate it?" He notes that if people see the benefit of avoiding another crisis like this, they will be more willing to pay for that prevention, likely through taxes or increased energy bills.

The issue is that in a political atmosphere like Texas's, officials would have to continue justifying the increased cost to consumers. "How do you respond next year when the crisis passes and the people ask, 'The weather is calm and the system is fine, why am I still paying more for my electricity?'" Kury explains. This issue isn't necessarily unique to Texas, though its Republican-leaning population may be a harder sell than others. It's not hard to imagine a candidate running for office in the future on the promise of lowering bills by cutting "unnecessary costs" if the state goes a few years without a major storm.

The biggest obstacle in the end, though, won't be the time, cost, or effort required to get Texas's grid up to code. Instead, it'll be finding the political willpower to do it. The state is under Republican control and has a governor in Greg Abbott who denies the scientific consensus that climate change is caused by human activity and has furthermore vowed to fight the federal government on environmental regulations every step of the way. For anything to change, Abbott and other lawmakers will have to come to terms with reality and recognize that these types of extreme weather events are likely to continue happening.

Here's hoping they do. The state would be better served by simply preparing now, rather than ignoring the obvious warning signs and facing the costs — human and monetary — after the fact.