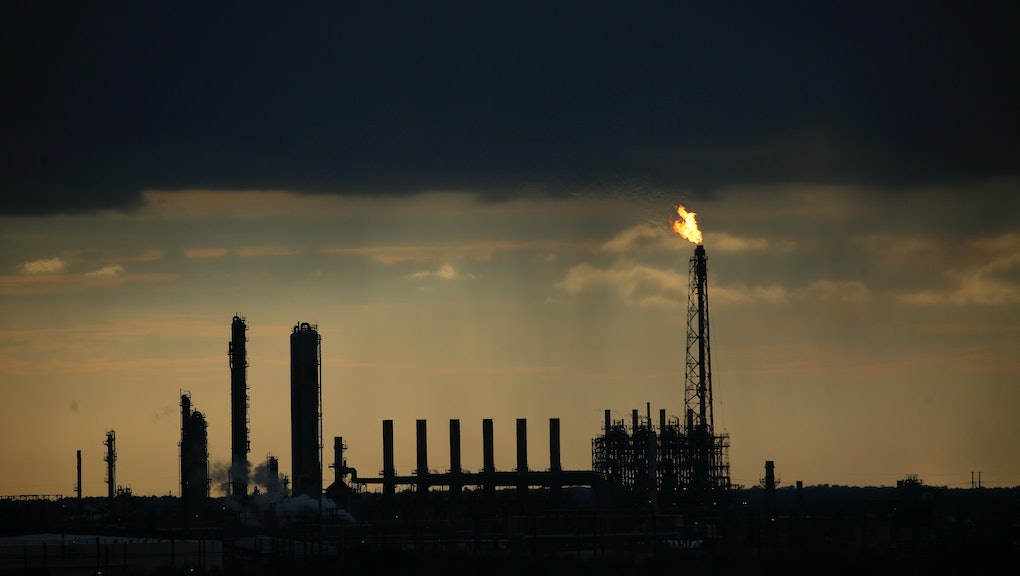 To add insult to injury, there's a spike in fossil fuel pollution in Texas

An unprecedented winter storm has hung heavy over Texas for the past week, leaving millions without power when the state's power grid, reliant largely on fossil fuels, froze up and failed. Many of the gas and oil facilities around the state are once again operational, but the damage is anything but over. According to a report from Earther, air pollution near oil wells, refineries, and pipelines has nearly quadrupled in the past week, leaving vulnerable populations exposed to dangerous emissions.

The report focused on pollution event reports recorded by the Texas Department of Environmental Quality, which keeps track of voluntary reports of excess emissions and leaks from fuel sources around the state. It found that from Feb. 11-18 — a.k.a. the week of the storm — there were 174 "emissions events" reported at fossil fuel facilities. By comparison, the weeks prior saw 45, 37, and 46 events, all about one-quarter as many as was seen during the cold streak. About 70 of the reports that came in the last week reportedly specifically made mention of issues related to freezing temperatures.

The reports don't just indicate how many of these emission events occurred, but also provide some upsetting details about the consequences. Earther pointed to an ExxonMobil in Houston suburb Baytown that leaked 68,000 pounds of carbon monoxide over the course of two days. In Deer Park, another outer suburb of Houston, 6,500 pounds of isoprene, a cancer-causing chemical, poured into the air from a Shell facility. An incident at a Valero refinery in the majority-Black city of Port Arthur resulted in 57,000 pounds of sulfur dioxide spewing into the atmosphere.

Living near an oil or gas facility in Texas was linked to adverse health outcomes well before this spike in pollution. Last year, the Environmental Integrity Project highlighted the fact that six oil refineries in the state were expelling benzene, a cancer-causing pollutant, at rates above the federally allowed limit. Another report published by the same organization a year prior found that the oil boom in Texas was producing excessive emissions of sulfur dioxide and hydrogen sulfide. A study published last year in the Journal of the National Cancer Institute found that Texans living near oil refineries have a significantly increased risk of cancer.

It's worth noting that those who live near these facilities are more often than not members of low-income households and marginalized communities. This is the result of the long-standing effects of racist policies that effectively segregated Black communities, including redlining, which relegated people of color to less desirable neighborhoods, and the practice of building highways that cut off communities of color from the rest of their city. In 2018, an Environmental Protection Agency report concluded that people of color are much more likely to live near pollution sites, and that people experiencing poverty are exposed to more air pollution than those living above the poverty line.

What is particularly upsetting about the increase in emissions events in Texas is that it likely could have been avoided. Much like how the state's electric grid could have remained operational if only proper winterization procedures had been in place, the same techniques likely could have prevented some of the leaks of harmful pollutants.

The Texans living near these fuel sources cannot afford to hop on a plane to Cancun and avoid the damage. Instead, they are left shouldering the burden of state leadership’s failures — and inhaling the consequences.