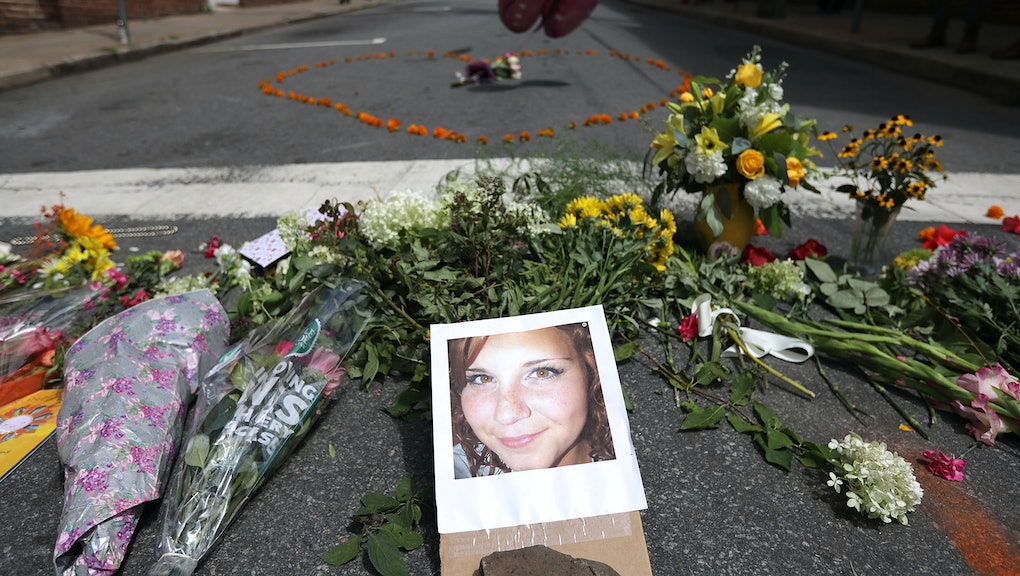 Flowers surround a photo of Heather Heyer, placed near the spot in Charlottesville, Virginia, where she was killed when a car plowed into protesters in 2017. [Chip Somodevilla/Getty Images]

Kelley Cruse-Nicholson was driving home on an early September evening when she noticed Black Lives Matter protesters weaving through the streets of Richmond, Indiana. Cruse-Nicholson, a city councilmember and lifelong Richmond resident, decided to follow along; she knew her friends were in the crowd. While she was trailing the crowd in her car, she saw a car stopped at a crosswalk the crowd was approaching. “I saw him take off through the crowd,” says Cruse-Nicholson. “People are telling me that it's hearsay because I was in the car by myself, but I heard him rev his engine.”

In an increasingly common story, a driver drove his car into the group of protesters Cruse-Nicholson was following. She watched as residents of her city scattered to avoid getting hit, then she followed the driver back to a house and called 911 while waiting in her car. “The driver got out, looked at me, kind of laughed, [and] went into his house,” Cruse-Nicholson tells Mic. More than three months later, she’s still rattled. “I'm still just dumbfounded that that happened at all. ... You get upset when you see instances like that on television, but when you see it in real time, it has a completely different effect on you.”

This year has seen people driving cars into protesters in New York City, Albuquerque, Los Angeles, Denver, Memphis, and Seattle. It’s a serious uptick in car-related incidents. Many remember the death of Heather Heyer in 2017 during the “Unite the Right” protests in Charlottesville, Virginia. Heyer was killed by James Alex Fields, who drove his sports car into a crowd of protesters; Fields was found guilty of first-degree murder in 2018. At the time, the incident shocked the nation.

But three years later, those who have studied the spate of vehicle-rammings see a clear conclusion. This is becoming a trend — and it’s not always who you’d expect that is behind the wheel.

University of Chicago Ph.D. student Ari Weil concluded his masters thesis on the increase in vehicle ramming attacks over the last decade in May 2020. Little did Weil know that a whole new batch of data would come trickling in over the summer. In June, he created his own database to track incoming reports, using social media posts and local and federal court documents as available. According to Weil, between late May and early September, there were 104 vehicle-ramming incidents at protests in the U.S. Weil speculates the rise in vehicle-ramming could, in part, be due to an increase in opportunity: The 2020 uprising for Black lives may be the largest protest mobilization in U.S. history.

Weil stresses that this trend is not a coordinated effort coming from “card-carrying extremists.” Instead, he tells Mic, this is evidence of a greater normalization, through widely-shared memes on Facebook and Twitter, of violence against protesters. “None of these memes are new. The ‘run them over’ memes started six years ago with the start of Black Lives Matter protests,” Weil points out. “People were then joking about this online, that hashtag ‘all lives splatter’. I tracked those and saw them picking up again in late May, as the protests took off.” Memes joking about hitting protesters and about drivers’ “right to the road” contribute to a normalization of these actions, says Weil. “That discourse is a discourse about rights. ‘By being in the street, you're giving up your rights, therefore, I have full liberty to drive right through you,’” he says, paraphrasing perpetrators’ logic.

Writer and anti-fascist Shane Burley, author of Fascism Today: What It Is and How to End It, agrees. While the Charlottesville attack is an obvious example of neo-Nazi violence against protesters, it’s something of an anomaly, in that it was widely condemned by conservatives and was ideologically clean-cut. “When you think about the history of protests, they exist along a spectrum. But the generally-supported types of protests, from liberal white people — or even conservative white folks, looking at the past — was the sort of Martin Luther King-style non-violent protest, which is obviously a reinterpretation of reality,” says Burley, referring to the idea that all civil rights protests throughout the mid-20th century were non-violent and therefore non-obstructive. “Generally, these were poised as the ‘correct’ sort of protest.”

“White folks were willing to accept people marching across the Selma bridge, [but] they were not willing to accept riots in Detroit or Watts. But the reality is that non-violent protests, even at their most tame, are disruptive. That's the whole function of it,” Burley continues. “So people are suddenly really angry that their commute is blocked by protesters who are lined up across highways. And as the far-right politics of the era try and recontextualize Black Lives Matter [and] reframe them as terrorists, they reframed the blocking of cars as somehow violence.”

Burley calls those engaged in this reframing “alt-lights.” As Weil explained as well, these individuals are not necessarily open white supremacists, they’re mainstream conservatives cracking jokes about hitting protesters. “There was a certain amount of cultural work, sort of meta-political work, that was done to normalize the idea that crashing into protesters is perhaps justified — certainly morally justified, but perhaps even legally justified,” Burley says.

The rise in cars driving into protests comes simultaneously with the public criminalization of protesters exercising their constitutional rights. While the events of that September evening haunt Cruse-Nicholson, what came next is also something she’s still grappling with: Richmond prosecutors charged six protesters who were in the street at the time of the incident with misdemeanors for obstructing traffic, while the person who drove their car into the crowd received a misdemeanor for “leaving the scene of an accident.” Says Cruse-Nicholson, “As a councilperson, I look at this as an issue for our city.”

Legislation from states permitting violence against protesters has enabled the weaponization of the personal car. “In the leaked planning shots from the [2017] Charlottesville rally, people talk about the North Carolina bill that just had passed [the statehouse] as if it gave them the right to run people over,” says Weil. The North Carolina bill Weil references, passed in the house where it then died, would shield drivers from civil liability if they hit protesters.

Last month, Florida Gov. Ron DeSantis (R) similarly proposed an expansion to the state's infamous "Stand Your Ground" law, which was used in 2013 as a legal defense for Trayvon Martin's killer, George Zimmerman. The proposal would authorize citizens to use force against protesters enacting "interruption or impairment" of businesses; it would also make obstruction of traffic during a demonstration a third-degree felony while providing a legal shield for drivers who kill or injure protesters, if they claim it was unintentional, in those situations.

“People in those spaces actually believe that they can get away with it, that there's been enough sort of obscure litigation about the car violence that it's going to be read legally as self defense,” agrees Burley. “And likewise, I mean, protesters are really scared about this. They should be. This is what actually gets people killed.”

“When people are going on, like, ‘Why aren’t they engaging in civil disobedience?’ It’s because you'll fucking kill them if they do.”

Burley connects this directly to police violence, explaining that police unions have supported legal immunity for those driving into protesters. “People have looked at the heavy use of [white supremacist] vigilantes the last two years, and it seems extraordinary. But historically, police sort of let vigilantes do what they wanted, and it seems to be a historic way in which social norms are created,” observes Burley. “White supremacy is maintained through the allowance of vigilantes to do things that police don't do.”

Weil referenced the incident in Indiana that Kelley Cruse-Nicholson witnessed, of protesters being charged in addition to — or instead of — drivers. “I think doing that is dangerous, because it makes protesters feel unsafe, and it could potentially further encourage people, if they think they're going to get away with this. ... It has huge normative implications when you're punishing the people who get hit,” he says, rather than the people doing the hitting.

“The whole function of these non-violent protests, the reason people went to the road, is that people won't run them over,” says Burley. At the time, there was enough belief in the social contract that they could trust that fellow civilians wouldn’t try to hit them, whether out of solidarity or to avoid legal repercussions. “It worked because people aren't willing to kill another person. Yet that has been severed. And so when people are going on, like, ‘Why aren’t they engaging in civil disobedience?’ It’s because you'll fucking kill them if they do.”

For her part, Cruse-Nicholson is trying to support the charged protesters through finding legal representation and fighting the charges. As a city councilmember, she’s especially frustrated with how things have played out, and by her inability to make changes as just one person. “I actually witnessed an incident, followed the person, turned them over to the police, and what I had to say held no water,” she says. “It left a little bitter taste in my mouth, to be honest with you.”

She continues: “I still get angry. And right now I don't know what we're going to do, honestly. No one's talking about it except for me.”

More like this
Vaccines are good. Threatening to evict someone over them is not
By Rafi Schwartz
After 9/11, the U.S. leaned into security theater. Here's how that's playing out 20 years later
By Vanessa Taylor
100 years after the country's largest labor war, its dark legacy still looms
By Kim Kelly
Stay up to date