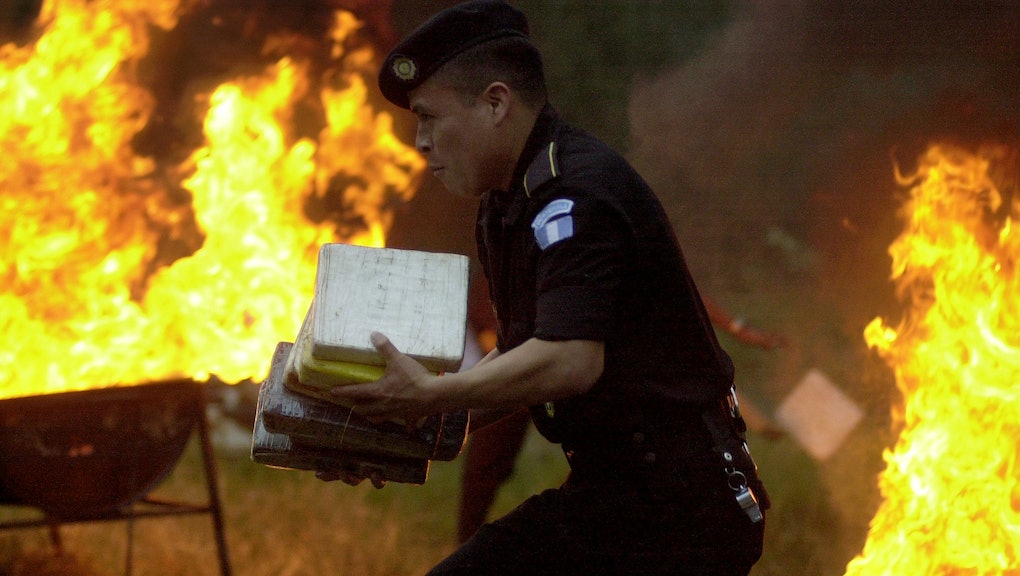 How cocaine contributes to climate change and deforestation in Central America

The illegal drug trade has many victims, and that includes the environment. According to new research published by the Neotropic Foundation and the Prisma Foundation of El Salvador, the cocaine trade contributes to climate change, causes more than $200 million in damage every year, furthers deforestation and drives people out of their homes by making the regions unlivable. Much of that damage is done in an effort to bring cocaine from South America to the United States.

One of the primary ways that the cocaine trade hurts the environment is through the actual transportation of the drugs, which have to be brought through Central America. In order to avoid law enforcement, traffickers often travel through unconventional routes. Some of those routes go straight through national forests. In order to gain access to those remote and otherwise protected regions, and to launder the money they make from the trade, traffickers have started to invest funds into ranching and agriculture — two industries that are allowed to upend forest lands to make way for crops and livestock. Instead of simply bulldozing trees and burning woodlands for those purposes, though, the traffickers have started building roads and airstrips to help enable the transport of drugs.

These recent studies, which were published just ahead of the start of the United Nations Framework Convention on Climate Change's PreCOP25 climate conference in Costa Rica, reaffirm the concept of narco-deforestation, which has been on the minds of conservationists for years. A 2014 study published in the journal Environmental Research Letters suggested that as much as 30 percent of the annual deforestation taking place in Central American nations of Nicaragua, Honduras and Guatemala was related to drug trafficking. Between 30 to 60 percent of those annual losses of forest areas took place in protected regions, which threatens the biodiversity of these forests and puts a significant dent in their ability to support plants, animals and indigenous people.

These deforestation efforts led by drug traders could have devastating effects on Central America, and for our climate as a whole. Forests in Central America account for nearly seven to 10 percent of the world's biodiversity, according to Science — meaning up to 10 percent of known species are native to the region. The invasion and destruction of those habitats push plants and animals either out of the region or to the point of extinction. Many of those protected lands are also occupied by indigenous communities. As traffickers push further into the forests, the people who have lived in those regions for generations are being pushed out and displaced — left disconnected from their community and from the land they have lived off.

More broadly, deforestation puts a dent in some of our best natural defenses to climate change. Forests like those found in Central America are known as carbon sinks, which is to say they absorb and hold more carbon than the release. About 30 percent of all carbon emissions are captured by trees each year, and if we simply let our forests do their jobs, they just might be a major key in saving us from the most devastating parts of climate change. A 2016 study suggested that if the forests of Latin America were left alone, no longer cut down for any number of reasons, they could absorb more than 31 billion tons of carbon dioxide out of the atmosphere all on their own — nearly enough to wipe out an entire year of the 37 billion tons we emit annually. Instead, we continue to cut into this important resource for a variety of reasons — agricultural expansion, use of trees for paper goods and other products, the drug trade — and it's cutting into our defenses against carbon and other harmful greenhouse gases. Deforestation contributes about 20 percent of all carbon emissions globally, letting emissions into our atmosphere that would otherwise be captured and stored.

What all of this suggests is that drug policy doesn't just have an effect on access to drugs. It is intrinsically tied to conservation policy and the environment, as well. When the U.S. decided to crack down on drug cartels operating in Mexico, it pushed cocaine and other illegal activity to South and Central America. That policy unintentionally has led to the deforestation that is taking place now. In trying to keep illegal drugs from crossing the border, the war on drugs has turned into a war on the environment that has devastated the biodiversity of Central America forests, displaced indigenous people and diminished the strength of some of our most effective carbon sinks. These likely aren't consequences that were considered when forming policies meant to deter drug trafficking, but should be taken into consideration going forward. As it turns out, some of the worst effects of the drug trade don't come from the use of the drugs but rather what people will do to move and profit off them.

This article was originally published on Oct. 9, 2019