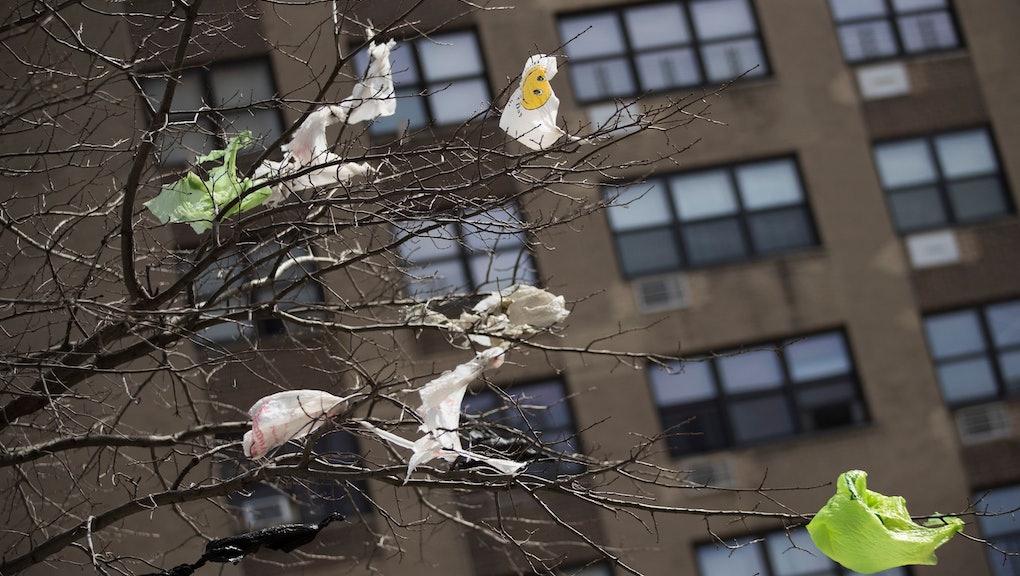 'Plastics' and 'climate change' have gone hand-in-hand lately, with reports tying the two together as part of a larger effort to save the Earth. But the relationship between plastics and climate change can be a little fuzzy. Taking reusable grocery bags to the supermarket will keep plastic bags from being dumped into the ocean, sure. But what does that have to do with the rising levels of greenhouse gases in our atmosphere?

We know that different kinds of ocean life and marine mammals have died from ingesting plastic bags or suffered injuries from plastic straws. We've heard about plastics becoming microplastics that contaminate our waters and air. Our concern about the effect of plastic litter has grown to the point that cities around the world have enacted a ban on single-use plastics to combat the issue. It's an important move that signifies how people are recognizing that single-use plastics are, clearly, a polluter.

But the question remains: How exactly does it contribute to climate change? Emily Jeffers, staff attorney for the Center for Biological Diversity's Oceans Program, took the time to tell Mic about the role plastics play in accelerating climate change.

"The increase in plastic production encourages the overproduction of fracked natural gas in the U.S., which emits methane and other greenhouse gases that create global warming." Jeffers says. "Greenhouse gases are also emitted as ethane is turned into plastic, and then again as the plastic degrades, fueling global warming. Plastic production will play an increasing role in climate change in coming years, according to [an] excellent report by CIEL."

The report by CIEL, which stands for the Center for International Environmental Law, is a 100-page study titled The Hidden Costs of a Plastic Planet. Most notably, it details the organization's findings and results as they evaluated the impact of plastics on the Earth. CIEL concluded that plastics pose a risk to the planet in every step of their lifecycle.

"Nearly every piece of plastic begins as a fossil fuel," reports CIEL, "and greenhouse gases are emitted at each of each stage of the plastic lifecycle: 1) fossil fuel extraction and transport, 2) plastic refining and manufacture, 3) managing plastic waste, and 4) plastic’s ongoing impact once it reaches our oceans, waterways, and landscape."

The study then explains how the processes "threaten the ability of the global community to meet carbon emissions targets."

First, the extraction and transport of fossil fuels for plastic manufacturing can create greenhouse gases through sources like methane leaks; emissions produced while drilling for oil and gas; and the damage done to forests and fields when they're cleared out for pipelines. According to CIEL, during 2015, the U.S. produced 9.5-10.5 million metric tons of "CO2 equivalents" (CO2e) — a term used to describe a group of different greenhouse gases as a whole unit — while extracting and transporting raw materials to make plastic. Worldwide, that number jumps up to 108 million metric tons of CO2e.

Second is the refining and manufacture of plastic. CIEL warns that "plastic refining is among the most greenhouse gas-intensive industries in the manufacturing sector — and the fastest growing." The refining factories in the U.S. alone have as much CO2 as the equivalent of 3.8 million passenger vehicles. Globally, it's as much as 45 million vehicles driven for a year. CIEL expects these numbers to rise; the organization reports there are "more than 300 new and expanded petrochemical projects being built in the U.S. alone — primarily for the production of plastic" and plastic raw materials, known as 'plastic feedstock,' such as naphtha.

The next issue involves plastic waste management. National Geographic has reported that it's not completely clear how long it takes for plastic to fully degrade. Current estimates have ranged from "450 years to never." Which means we're stuck with it for a long, long time. What we do with plastic waste in the meantime is the problem; we either send it to a landfill, recycle, or incinerate it. According to CIEL, all of these options create some emissions — but incineration tops them all in the amount produced. Unfortunately, the organization warns that incinerating plastics is "poised to grow dramatically in the coming decades."

The final point in the report involves plastic in the environment. What happens when plastic isn't disposed properly and allowed to live a very long afterlife? It simply continues to damage the environment, reports CIEL. Plastic that floats on the ocean's surface can release emissions as it slowly decomposes. Plastic on "coastlines, riverbanks, and landscapes" also release greenhouse gases at a higher rate than plastic floating on the ocean. More research on these emissions is necessary, however, since current estimates only address plastic that reaches the surface. There's far more waste below the ocean's surface, where microplastic "may also interfere with the ocean’s capacity to absorb and sequester carbon dioxide."

The ocean is enormously important in absorbing the Earth's carbon. Microscopic plants and animals in the water all play a role in preventing high levels of carbon in the atmosphere. But, lately, scientists have found that the plankton have been contaminated by microplastic. "Laboratory experiments suggest this plastic pollution can reduce the ability of phytoplankton to fix carbon through photosynthesis," reported CIEL. These early indicators of plastic interfering with carbon absorption demand attention, and the organization recommends continued research into the possible detrimental effects.

Despite evidence of continuing and growing concern over the life and afterlife of plastic, the report notes that the situation has not gotten any better.

"In 2019, the production and incineration of plastic will produce more than 850 million metric tons of greenhouse gases — equal to the emissions from 189 five-hundred-megawatt coal power plants."

Is focusing on plastic 'too easy?'

There are some environmental critics who believe the focus on plastics is just a consumer-friendly attempt to make people feel better about 'doing their part.' Rick Stafford, a professor of marine biology and conservation at Bournemouth University, joined together with fellow marine conservationist Peter JS Jones, a reader in environmental governance at University College London, to write an op-ed for The Conversation that lamented the single-minded attention on plastic waste.

"That’s not to say plastic pollution isn’t a problem," they wrote, "rather there are much bigger problems facing the world we live in — specifically climate change."

But Jeffers takes a different approach to the criticism. She believes that, instead of thinking of plastic pollution as just tackling trash, addressing plastics is but one part of a whole in the global effort to reduce human-accelerated climate change.

"We need to attack climate change through all avenues given the dire existential threat it represents," insists Jeffers. "That includes preventing the fossil fuel industry from turning our oversupply of fracked natural gas into throwaway plastic packaging and products. Plastic is harmful to our climate and a disaster for wildlife."

Targeting plastics can also bring attention to other problems, such as the reliance on fossil fuels. "We also need to rapidly convert to clean energy sources, stop opening up new regions to fossil fuel production, and stop offering fossil fuel leases in our public lands and waters."

Is getting rid of single-use plastic enough?

So, does it help to ban plastic grocery bags and plastic lids for your lattes? Yes, says Jeffers, but we need to go further.

"Laws that reduce waste from plastic bags, straws and other throwaway products are good, but we want to go to the source," she explains. "We want to end fracking and the ethane it produces, which is easily converted into plastic. The beverage industry should stop its aggressive promotion of plastic water bottles when most tap water is a far better alternative."

The report from CIEL concluded similarly. CIEL recommends "ending the production and use of single-use, disposable plastic" along with "fostering the transition to zero-waste communities." Additionally, they believe governments and regulators need to step in to stop further development of oil and gas mining for plastic production and other industries. The organization warns against "false solutions" that make people feel good about themselves without actually doing anything to help the environment.

"[L]ow-ambition strategies and false solutions (such as bio-based and biodegradable plastic) fail to address, or potentially worsen, the lifecycle greenhouse gas impacts of plastic and may exacerbate other environmental and health impacts." Simply stopping the use of plastics isn't enough either — it should be done together with ending further plastic production.

"Ultimately, any solution that reduces plastic production and use is a strong strategy for addressing the climate impacts of the plastic lifecycle," states CIEL. "Nothing short of stopping the expansion of petrochemical and plastic production and keeping fossil fuels in the ground will create the surest and most effective reductions in the climate impacts from the plastic lifecycle."

The authors of The Conversation op-ed might agree with that. They believe people should strive to adjust their overall lifestyles to account for environmental impact. "We must reform the way we live rather than tweak the choices we make," they wrote. "The focus needs to be on making the way we live more sustainable by questioning our overly consumerist lifestyles that [effect climate change] rather than a narrower focus on sustainable consumer choices — such as buying our takeaway coffee in a reusable cup."

In the meantime, larger organizations like CIEL and the Center for Biological Diversity are determined to push against big development companies. Jeffers says they're currently "focusing on stopping some of these new proposed plastic plants from being built along the Gulf Coast and Rust Belt." They have also "petitioned the EPA to update its decades-old water pollution standards governing plastic plants."

According to Jeffers, pressure from regulators, the government, and concerned citizens are needed more than ever. "Companies like Formosa Plastics — which a Texas judge just labeled a 'serial offender' liable for polluting Texas waterways with billions of plastic pellets — need tougher regulators" rather than rolling back protection and easing restrictions that help the environment. With more people joining the push for their state leaders to acknowledge the impact of climate change, there's some hope that this momentum can hit plastics, and their sources, while encouraging others to live sustainably.

More like this
What cities will be most affected by climate change?
By Vanessa Taylor
Texas officials responded to the winter storm with propaganda they got from a pro-fossil fuel think tank
By AJ Dellinger
Leaked calls reveal the conservative "master plan" to tank climate action
By AJ Dellinger
Stay up to date