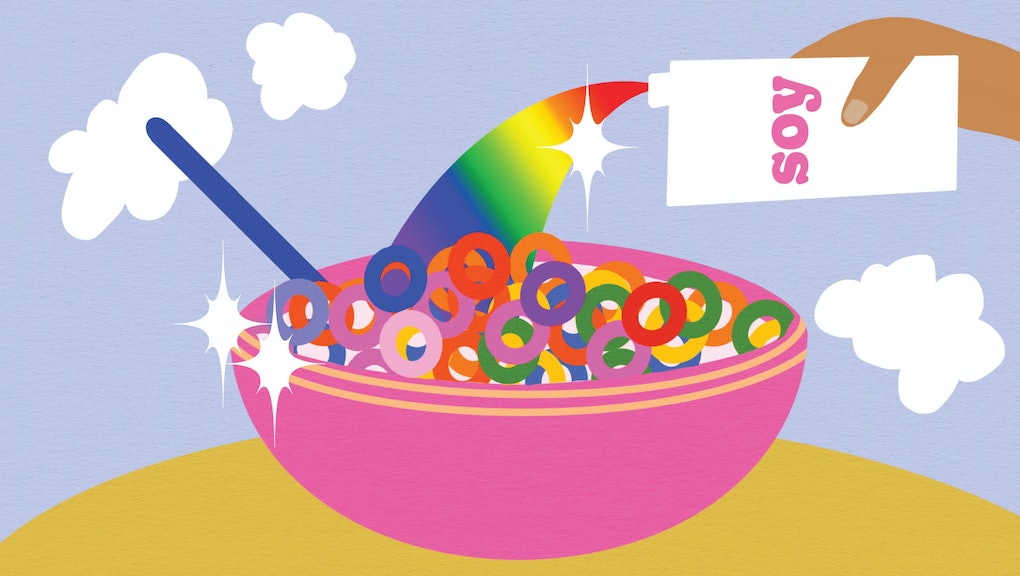 How did soy milk get so queer?

Long before I knew that I liked men, I knew I loved soy milk. I can’t remember when the obsession began, but I would often beg my mom to buy a big carton of it from H-Mart. It was light, a little sweet, and felt way fancier to drink than dairy milk. What's not to like?

I was recently reminded of the inception of my non-dairy milk affair when I was scrolling through TikTok and saw a viral video of two women bonding over their oat milk latte orders as a parody of lesbian culture. A few minutes later, I was served another video of a gay man preparing a cappuccino with almond milk to a lo-fi soundtrack. It seems there are hoards of queer people on the Internet connected by the divine love of milk that didn’t come from a cow.

Intrigued, I searched milk substitutes on different social media platforms, and each time, I was sucked into a portal that led directly into the Gay Internet. On Reddit, there were entire forums dedicated to queer women’s love of oat milk. On Twitter, I found lengthy, frequent threads about how soy milk is, actually, “super trans.” How the hell did milk substitutes become so queer?

My quest to answer this question led me to the dark side: late 2000s forums for men concerned about their masculinity. Sometime around 2008, these men led what appeared to be crusade against soy milk. I found several "articles" that swore that soy-derived products were making cisgender men grow boobs (a myth that’s since then, been passionately debunked).

The fears stemmed from the fact that soy contains estrogen, although probably too little to actually affect the human body (FYI, most cows are injected with hormones so their milk contains estrogen, too). One particular blog post by some dude named James Rutz helped stoke the great American soy panic in a really pronounced way. It's a weird thing to get famous for, in my opinion, but hey.

“Soy is feminizing, and frequently leads to a decrease in the size of the penis, sexual confusion and homosexuality,” Rutz wrote. This is, of course, a very incoherent conclusion considering that there is no proven link between estrogen and same-sex attraction. Also, as the Seattle Times pointed out, in response to Rutz’s piece, studies show that gay men are generally better endowed than straight men. Just sayin’.

Because some straight men feared that soy milk would shrink their privates and turn them homo, they refused to drink it. Look I'm not saying that made it more appealing to queer people but it does seem that much of what our patriarchal society bashes — lube, Britney Spears and astrology, to name a few — automatically takes on a holy aura in the queer community. Milk substitutes, apparently, are no different.

But even before the Great Gay Soy Scare of 2008, its fair to theorize that consuming animal products can be a marker of cishet masculinity in America and beyond. I remember when I moved to Texas from Mexico, I was horrified to discover that Elementary School boys drank cartons of cow’s milk everyday. This shit ain’t natural, I thought. Is this a bragging right or something?

It was the early 2000s and at seemingly every turn, I was bombarded with pro-dairy propaganda — from Olympic athletes in “Got Milk?” ads to school posters boasting about how milk strengthened your bones. But as someone who was never particularly interested in getting buff or being an alpha male, the advertising didn’t speak to me. Nonetheless, it was somewhat of a subliminal mantra: Real men drink real milk. For these men, being too concerned with what dairy milk will do to their bodies or caring about the suffering of cows seems, well, kinda gay.

“Anything [related to] eating ‘healthy’ or vegetarian is typically seen as unmasculine,” says social scientist Peter Glick. Glick compares some men’s aversion to drinking milk substitutes to the same sort of toxic masculinity that leads to an aversion for wearing masks. To those types of manly men, caring for their body in any way is like admitting that they aren’t naturally strong enough to handle things on their own— whether it’s drinking milk straight out of a cow’s tit or surviving a pandemic.

Even though it’s only gotten more intense, queer people’s love of milk substitutes is nothing new. In fact, it can be traced back to the 60s and 70s, when the environmental, animal rights and gay rights movements converged to form one giant, anti-establishment belief system. Liberal American identity came to encompass a lot of seemingly unrelated things, like veganism and supporting gay marriage. At the core of those belief systems was a desire to dismantle the assumed hierarchies that kept everyone who wasn’t a straight white man oppressed— racism, sexism and even speciesism.

While I can't speak for the entire queer community, my love of milk substitutes has stuck. Looking back, I realize my own obsession with soy milk was a quintessentially queer form of resistance against conventional masculinity.

I can confidently say that as a community, we embrace much of what the patriarchy rejects. Soy milk makes you grow boobs? That’s kind of cool, I remember thinking circa 2008. Whatever the reason that different generations of queer people love milk substitutes now, we are all bound by a common experience: stoking fear in straight men. And to that, I raise my iced soy latte.