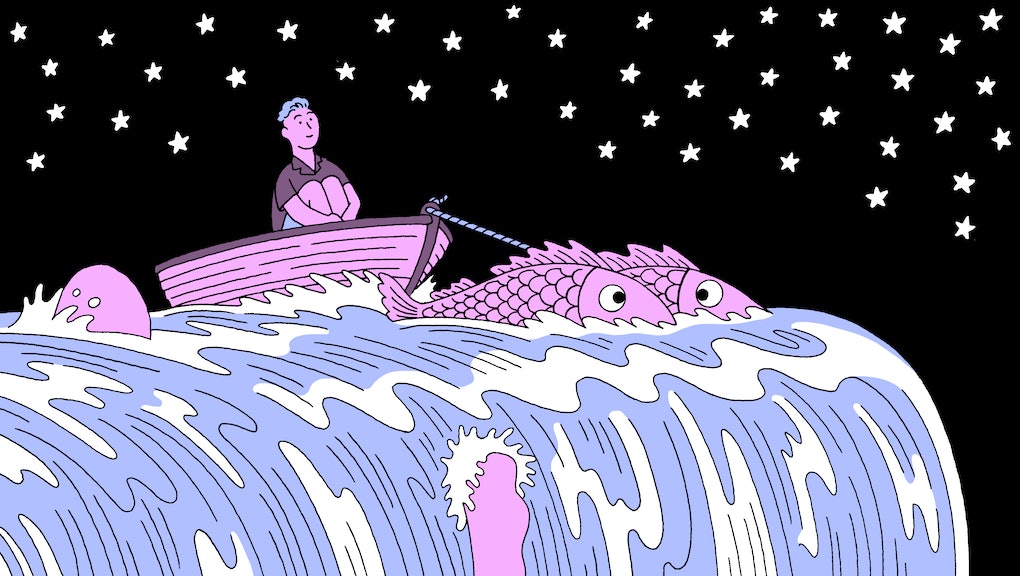 Why I broke up with queer astrology

The first date I went on after moving to San Francisco in my 20s was with a woman I’d met my first night in town. She sat with me in the corner of a gay bar and swiftly guessed I was a Virgo. I didn’t know much about myself or how to be a successful gay in the Big City, but in that moment I knew, at least, what I needed to learn: astrology.

Since then, I’ve educated myself exhaustively on the signs. I’ve paid for readings and synastry workshops. And although I’ve tended to affect some mild self-deprecation about it at parties when it inevitably comes up, in truth, I’ve found astrology fascinating and meaningful.

A few months ago, however, a marketing email for a popular new astrology app with a broad queer following slipped into my inbox. It promised, among other things, that I would “always know why I was feeling what I was feeling” if I paid to use it. And for the first time in a decade, I thought perhaps that it was time to take a break.

I didn’t know much about myself or how to be a successful gay in the Big City, but in that moment I knew, at least, what I needed to learn: astrology.

Millennials’ demand for astrological content has been on the uptick for the past several years and the internet’s full of theories about why. Whatever the reason, capitalism has not slept on it. Co-Star, a popular astrology app, is backed by over six million dollars, and investment continues to pour into the sector. And while queer folks — specifically, queer women and nonbinary people like me — are no more likely to outright believe in astrology than the rest of the population, we are significantly more likely to be “open to it.”

As Pride month cranks into high gear and corporations scramble to transform my community’s feelings of otherness into profit, I felt compelled to examine why astrology occupies the space it does in queer culture, especially amongst young and newly-out folks, with an eye towards how open we should be towards it, anyway.

For answers, I turned to Aida Manduley, a queer therapist based in Boston with 10 years of experience in mental health crisis support and six years of social work practice with individuals and couples/folx in multi-partner intimate relationships. Often, they say, LGBTQIA+ folks don’t get adequate care from therapists, “and I have so much compassion for people that pursue astrologers and spiritual folks when therapists fail them.”

The ways in which mental health professionals fail queer and trans folks range from ignorance to outright rejection (which, in at least one U.S. state, is actually legal). I myself have experienced years of hurtful misunderstandings on the couch with professionals who mistook my gender dysphoria for garden-variety anxiety, advising mindfulness practices that only increased my awareness of my suffering while failing to address its source.

Once, a therapist tried to normalize my confusion and discomfort during sex with men as a “common” experience for "young women." With therapists jumping to dysphoria — which isn't that common — and completely disregarding my gender identity (which is not a woman), is it any wonder that my community would seek alternative means of healing via astrology?

However, Manduley cautions that astrology can be detrimental to your mental health if followed to the exclusion of other therapeutic practices or used to justify damaging behaviors. “Sometimes, people lean into characteristics that hurt others because, oh, that's just my Aquarius rising,” they say. “I'm like — no, those are your childhood traumas making you be an asshole.”

At least one study backs Manduley up on this, in which participants who received negative horoscopes were more likely to behave indulgently afterward, perhaps to preemptively compensate for the crappy days they were told that they’d have.

Manduley says putting too much stock in predictive astrological phenomena like Mercury retrogrades can also trigger hypervigilance in people with anxiety. Unsurprisingly, LGBTQIA+ folx are disproportionately likely to be anxious, therefore potentially more susceptible to forking over cash to astrologers to comfort their fears.

Beyond the cost to our wellbeing, there’s also the hit to our wallets. Annually, Americans spend about $2.2 billion on “mystical services.” And generally speaking, queers are not flush with cash. Black queer and trans folk were hit extra hard economically during the pandemic, and LGBTQIA+ people are more likely than the general population to live in poverty.

When it comes to paying for astrology, Manduley says to scrutinize what’s offered. Curious questions and conversations that help navigate your spiritual and emotional growth? Helpful. “But if someone is predicting? Run.”

They also suggest considering an astrologer’s demographic. “If they are catering to a small minority of people who have a lot of disposable income, it means their [ability] to ask good questions is limited.” It’s worth noting here that, in most cases, anyone in the U.S. capable of throwing down money for a chart reading has likely got disposable income on their hands. In this country, almost all astrology is at some level geared to the rich.

But what about queers who came to the stars, as I did, for a sense of belonging? I’d hoped that astrology would help me feel "gay enough" for the love I’d moved to California to find. And if capitalism is good at anything, it’s offering quick fixes for feelings of inadequacy.

But as Manduley noted, there’s nothing inherently gay about astrology. In fact, “when we start to exclude people because they don't fit our idea of what queerness is, we're doing a disservice to inclusion in the community that could give us more political power.” It’s this lack of power in the culture at large, after all, that’s wounded my community so deeply that we’ve attached ourselves to a practice that consistently over-promises on its ability to heal us.

So I broke up with astrology. Sometimes I still think about her, though, calculating aspects or puzzling over transits. Recently, I even found myself having what felt like an astrological epiphany during therapy. I’d been discussing my tendency to self-criticize when I deviate from a plan, and how it conflicts with another tendency toward impulsivity. Sun in Virgo, I thought, and Sagittarius Rising!

I was so wrapped up in the tragedy of my natal chart that I almost missed what my therapist was saying: that over-planning and impulsiveness were behaviors borne of trauma, and if I wanted to address those issues, I’d have to connect with what had happened inside of me when I was younger, not with what the planets were doing outside of me when I was born.

For me, that work is best supported by a good therapist, antidepressants, and testosterone shots. I’ll probably always have an affection for astrology, but I’ve learned that when it comes to healing, some things just shouldn’t be outsourced to the stars, no matter how gay you are.

More like this
This white woman called herself the Queen of Congee for “improving” a 3,000-year-old Asian staple
By Joseph Lamour
How to embrace body acceptance without being ableist
By Melissa Pandika
Could mindfulness make you more selfish?
By Michael J. Poulin
Stay up to date