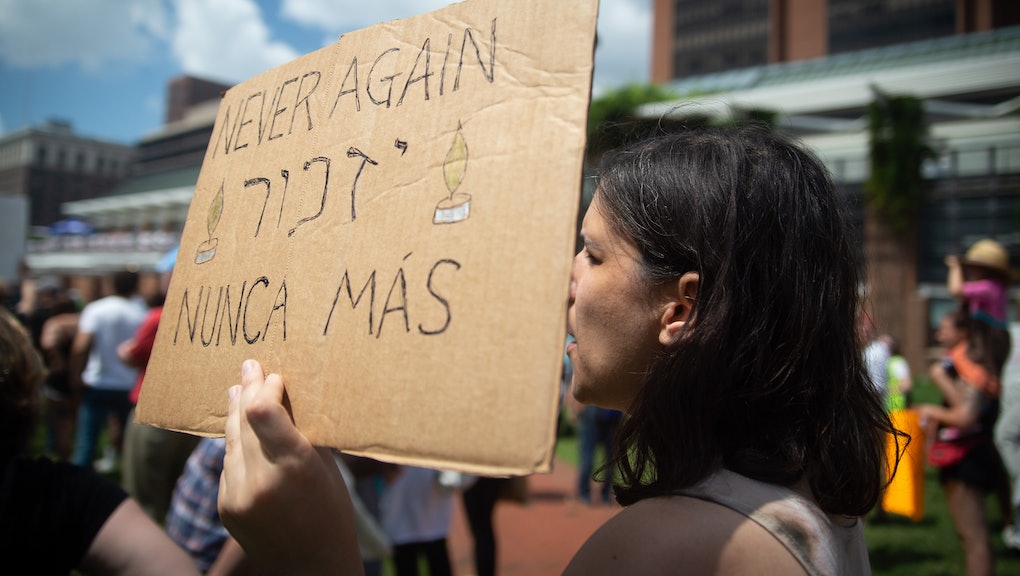 When Rep. Alexandria Ocasio-Cortez called the U.S. migrant detention centers "concentration camps" after photos from inside the facilities were released in June, the label drew ire from plenty of people, including members of the Jewish community. But not all Jews disagreed with the politician's word choice, and some, like Julia Davidovitz, 25, even stood outside Immigration and Customs Enforcement's D.C. headquarters in July to protest the department's policies.

Davidovitz is the grandchild of four Slavic Jews who survived the Holocaust; her grandfather was imprisoned in the Minsk Ghetto in Belarus, and was one of the only people in his family to survive. Today, Davidovitz is a member of Never Again Action, a new group organized by Jewish people that aims to shut down ICE because "we know from our own history what happens when a government targets, dehumanizes and strips an entire group of people of all their civil and human rights," as said on the organization's website.

"It's impossible not to notice the parallels between the detention camps and the concentration camps," Davidovitz tells Mic. "The propaganda that the government is using to make everything seem like it's fine, when children are dying."

When Ocasio-Cortez called the detention centers "concentration camps," she was referring to the continued reports that thousands of people, including children, are suffering inside the dirty, overcrowded facilities. Yet some people have chosen to focus not on the reports, but on the politician's use of the term, even accusing her and others who've used it of being anti-Semitic. Davidovitz is outraged by this reaction.

"I'm getting really sick and tired of Republicans using Jews as a human shield for their racism and xenophobia, and I think there's no question that the consensus of many Jews is that the comparison is apt," she says. "I think that it is really cynical that non-Jewish, mostly conservative people are trying to weaponize Jewish trauma to discount the trauma of another vulnerable group. And we're not gonna let them do it in our name."

Stephanie Guedalia, 26, who was also at the July 16 protest and whose great-grandfather fought against the Nazis during World War II, agrees that the comparison to concentration camps is apt. "People don't have water food or access to proper hygiene or medical care," she tells Mic. "ICE agents are inflicting physical and psychological torture. People are literally dying."

In June, a video of Guedalia getting arrested outside of a detention facility in Elizabeth, New Jersey, went viral. Yet at Tuesday's protest, she was willing to risk getting arrested again in order to protest ICE's policies and actions. "It feels like the goal is to instill fear and terror into immigrant communities," she says. "Cruelty is in the design."

And "regardless of whether or not you agree with using" the concentration camp comparison, she adds, "it should still horrify you."

At the protest, the hundreds of people present had a straightforward objective: to shut down the agency's operations for the day. The protesters mostly came from two organizations: Never Again Action, and Movimiento Cosecha, an immigrant-led movement known for its decades of work advocating for the safety and dignity of undocumented people. Videos posted online from the demonstration show people locking their arms in front of entry ways, singing Jewish hymns and shouting protest chants in Spanish.

For several weeks, now, Never Again Action has partnered with Cosecha in national actions of protest across the country. Brenda Valladares, 29, an organizer with Cosecha, tells Mic that solidarity between the Jewish and immigrant communities, especially in this historical moment, is so important.

"There's so much deep understanding of shared values," explains Vallardes. "I think that the Jewish community has a particular moral history and culture that knows what this looks like — what dehumanization looks like. I think it shows in the solidarity and the initiative from the Jewish community to take action that is confronting."

Together, the two groups were able to complete their goal of shutting down the ICE headquarters. By doing this, Valladares explains, the federal employees tasked with carrying out the administration's most atrocious policies were "confronted with the choices they're making by working with an agency like ICE."

"We're taking action to really send a message... that there is this magnitude of a problem, and it needs to be met with a magnitude of solution," Valladares continues. "This building really represents for me the 30+ years of detentions, deportations, and abuse that the undocumented community has experienced."

For Davidovitz, Guedalia, and Vallardes, protesting ICE is not just an action against the agency — it's also an action against lawmakers on both sides of the aisle. They all point to the recent Congressional vote to give more funding to immigration enforcement, a move that passed without any protective language for migrants, meaning that the money might potentially go to the further abuse of migrants in their detention. The bill was supported by 129 House Democrats.

By calling out actions like the vote and standing up to ICE, the women and their fellow protesters are trying to prevent further abuse and future trauma for all immigrants.

"I got involved because like many other people, like many other Americans, like many other Jews, I am sickened that the United States government and their institutions are putting innocent people through with detention centers and deportations," Davidovitz says. "I really pray that we can ease their suffering and that undocumented immigrants all around the country know that we're on their side."