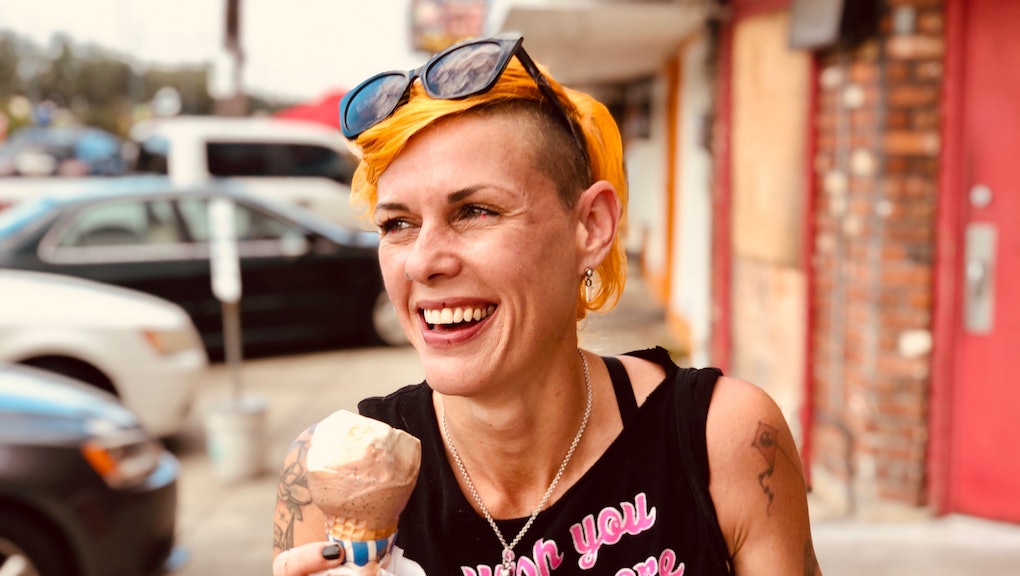 How my weight affirms my gender identity

I’m in a happy and accepting relationship with my body, for the most part. I take care of it and it takes care of me. It would be great if that were the end of the story, but, unfortunately, we all live in a world that has some pretty fucking limiting ideas about gender. I identify as non-binary and genderfluid, but because mainstream culture sees people in only pink and blue and I happen to have a vagina, I was raised to look an act like a girl. Purple wasn’t an option offered to me, so for most of my life, I did my best to think pink.

Like so many female socialized people, the struggle to fit in and also feel okay with how I look has been a complex journey fraught with unsurprising layovers in disordered eating, intense self-loathing, and body dysmorphia. I credit at least part of my new foray into body acceptance with coming out as non-binary. Owning my gender identity and having it recognized by others has made it feel a lot easier to dig the body I live in. But, as I move skittishly towards self-acceptance, I am starting to notice subtle new anxieties. In this coming out plot twist, I am learning that my weight has a surprising impact on my gender identity.

I've stayed at a pretty stable weight for the past two years, but what I have noticed is that even the most slight fluctuations affect how I feel about my gender presentation. Here’s how it seems to go: I feel most myself when I am a little skinnier than is probably considered healthy. It’s hard for me to admit that. First of all, the cultural mandate to be skinny is so obviously oppressive that I don’t need to explain why it feels anti-revolutionary for me to admit that I like myself better, thinner.

See, the problem is my breasts.

To be clear, I love boobs on other people of any gender. I just don’t want them for myself. When I’m slightly underweight, my already barely A-cup boobs disappear almost completely. At 120 pounds in a hoodie and sunglasses, I can pass for a sort of pretty skate punk boy. Not only do I love the gender flexibility that skinniness gives me, I also love being basically invisible to cis het men on the street. For those in the back, being constantly objectified and catcalled is exhausting and sometimes downright scary. Getting to skip comments about my body and smile feels like a major liberation. I can just stroll along this sidewalk with no unwanted commentary? What is this magic?

At 125 pounds — my default weight as an adult— I look like a woman who works out, slim and toned and round in the places that our culture says is right for femmes. But when my natural curves come out, even though I am mostly very femme presenting, they make my body feel too obviously “girl” to me. Not only do I feel more exposed to the hetero male gaze in public, I feel self-conscious about how other queer people will read my gender. Don’t get it twisted, y’all, queer folks are not to blame for my anxiety. In my lived experience, other queers respect however I choose to identify. The real culprit of my anxiety is the cisheteropatriarchal normativity that is designed to make all of us feel shitty about our bodies.

“Queer, trans, and cis people are all socialized from a very young age to make all of the same assumptions about themselves and others, and it’s almost impossible not to internalize and project those assumptions on others to some extent,” says Dulcinea Pitagora, a queer, non-binary New York City-based psychologist and sex researcher. “Because of that, it makes sense that queer and transgender and gender non-conforming — TGNC — people worry about people reading us the wrong way, because of how the majority often incorrectly reads our gender, or makes other assumptions based on the way our bodies are perceived.”

In other words, no matter how fluid I feel and how queer and accepting my people are, I grew up and still live in a world that can’t think past boy and girl binaries. The difference between how I feel on the inside and how I am seen from the outside creates anxiety. “When our bodies and presentation is perceived incorrectly by others, it can be painful to be lumped in with a group we don’t identify with, and it can be even more painful to be excluded from a group that we do identify with,” Pitagora says.

It may seem contradictory to fear exclusion from the queer folks that are my chosen family, but most people can probably identify with the idea that the closer you want to be to someone, the more important it feels to be seen clearly by them.

So many people who are queer or TGNC feel invisible for much of their lives, Pitagora explains, and that invisibility makes us feel alone. My anxiety about how I am seen by other queer and TGNC people feels high stakes because it is high stakes. If they don’t see and accept me, who will?

My desire to stay skinny and boobless, then, is partially a result of living in the world of binaries and the pressure of female beauty norms, yes, but it can only be interpreted as compliance with those norms if you insist on reading me as female. For so many reasons, I really wish you wouldn’t. If you read my gender identity the way I am trying to write it (as fluid) then this same desire to be skinny can be seen as a way that I am trying to resist against the binary.

Don’t get me wrong. I am not trying to say that wanting to be skinny is inherently radical or that having tits reinforces the gender binary. Breasts are, however, heteronormative markers of femininity for two reasons, Pitagora explains. First of all, boobs represent a reproductive function. Second, they are the erogenous zones that are most visible to others. “Both of these aspects are sexualizing, objectifying, reductive, and dehumanizing,” Pitagora says. “Given that so much focus is placed on breasts, this focus detracts so much from seeing the entire person and treating that person as such.”

Go figure that I and other queer and TGNC folks might want to be seen as whole humans. “For many TGNC people, it feels important to change the shape of their body to be read a certain way,” Pitagora says. “Some people do this via medical interventions, like taking hormones or having surgery/ies, while others who don’t want those things or don’t have access to them will put on weight to add size or curves, or take off weight to reduce stature or be less curvy.”

To be clear, these body-changing strategies are important, not because queer and TGNC people are more body obsessed than anyone else, but because it is in our bodies that we find a sense of belonging, to ourselves and with others. Because my gender identity is fluid, being seen and accepted in the complexity of my range of gender expressions helps me feel at home in my body and in community. Or, as Pitagora puts it, “when people we identify with see us for who we really are, it can feel especially validating and affirming.”

More like this
What is an e-bike and should I get one?
By Caroline Shannon-Karasik
How to embrace body positivity without being ableist
By Melissa Pandika
How to not be a jerk as restaurants reopen, according to servers
By Tracey Anne Duncan
Stay up to date