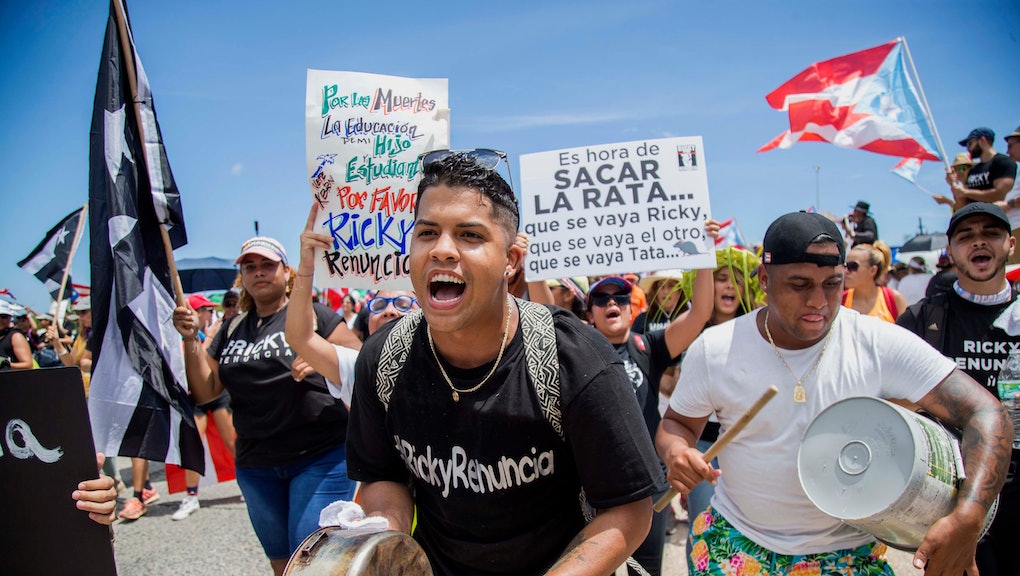 How Puerto Rican music has added power to the historic protests

For more than two weeks now, Puerto Ricans have been protesting. The uprising that began as #RickyRenuncia has evolved into #WandaRenuncia after the rallies successfully ousted the island’s governor, Ricardo Rosselló, and turned their focus to Wanda Vázquez, the Secretary of Justice who is set to become the island's new governor but has faced her own corruption allegations. Yet although protesters’ demands may have changed, what has remained constant throughout the fight is the overpowering presence of Puerto Rican music.

During the protests, which began on July 13, Puerto Ricans have expressed their voices through debates and speeches, but also in the way they know best: by taking the streets to sing plena, dance bomba, and bang pots and pans with cooking utensils, a practice commonly known as cacerolazos, every night from their residency balconies.

Puerto Rican musicians like Bad Bunny, Residente, and Ricky Martin — artists who have helped bring Latin music to the mainstream — have also joined the movement. Their presence, along with the energy and media attention they inspire, have been vital to the long hours protesters have been out in the streets demanding change for their patria, or homeland.

“Puerto Rican artists and musicians are the ambassadors of the movement on a worldwide level during the ongoing protests, using their larger-than-life reach to bring the masses to pay attention to what is happening in Puerto Rico,” says AJ “El Kallejero” Ramos, Latin music expert and former Spotify editor. “They way they used their cultural relevance to drive political change on the island they call home was impressive.”

It's far from the first time that Puerto Rican politics and music have intertwined. “Poetry, art, music — every single one of the humanities has been very present in Puerto Rico’s protests from the very beginning,” explains Maritza Stanchich, a LatinX culture professor at the University of Puerto Rico who's been attending protests in the island for years. "Music has been central to their cause.”

One crucial aspect of Puerto Rico's cultural fabric that has put the island in the spotlight globally is its music. Considered the birthplace of salsa and Latin music’s urban movement: Puerto Rico today dominates Billboard charts and boasts many of Hispanic music’s top artists, including Ednita Nazario, Daddy Yankee, Marc Anthony, Ozuna, and Kany García. Throughout the island's history, Boricuas, another term for “Puerto Ricans” that derives from its indigenous Taíno heritage, have used different music genres to showcase their feelings on pressing issues.

Salsa, for instance, was brought to life by marginalized communities of New York, with lyrics about discrimination and poverty that have inspired protest songs in Puerto Rico for decades. Bomba, too, has played a major role in the island's political history. Less-known worldwide but Puerto Rico’s most traditional music, the dance form brings boricuas closest to their African ancestors. It also dominated the University of Puerto Rico strikes against education budget cuts in both 2010 and 2017.

Then there's plena, the percussion-driven musical tradition rooted in African music that has been fundamental throughout the history of resistance in Puerto Rico. Plena originated as a way to recite daily news events and often satirize local politicians or scandals, but over time it became a vital cultural part of the community’s expression and a musical dialogue of enslaved people and countrymen who found themselves living together in the barrios (neighborhoods) of Ponce at the beginning of the 20th century.

“Classical plena was traditionally used as the newspaper of our people,” Juan Carlos Rivera, a sociologist based in Santurce, tells Mic. “It was a way to find out about the important events in the community but also a way of developing our own oral and popular history.”

Bomba and plena have both played large parts in the current rallies. “These protests have been a process of radical democratization where people have been sovereign, expressing their freedom in the streets,” Rivera says. “And that also includes the body. Moving our caderas and fondillo — hips and behind — is also a way to protest.”

This summer's protests began after nearly 900 pages of leaked chat messages between Rosselló and top officials revealed misogynist, sexist, homophobic, and even violent remarks directed at opposition leaders, fellow party members, celebrities, and journalists. The messages were the last straw for many Puerto Rican residents already frustrated with the lack of local and U.S. response after Hurricane Maria, years of political corruption, and a system they feel only serves the island’s elite.

The rallies have mainly been led by young people, la generación del “Yo No Me Dejo” (Generation ‘I won’t let you mess with me’) as Bad Bunny says in his protest song with Residente and iLe, “Afilando los Cuchillos.” With many young Puerto Ricans choosing to leave the island due to the lack of professional opportunities (the so-called “brain drain”), others want to stay but feel the need to fix the political system, or at least stand up against it, in order to do so. “They’re being expelled by the crisis,” explains Stanchich. “Forced to leave for economic reasons, even before Hurricane Maria. They feel like they have no choice.”

That’s where protest songs and actions like perreo combativo, a now-viral form of protest created by the group Guayoteo, come in. The term, coined by singer-songwriter Tommy Torres, refers to a reggaeton dance style, and during the rallies, almost 6,000 people danced reggaeton in the Old San Juan streets demanding the governor’s resignation. “Este perreo es de protesta, Ricky renuncia y al pueblo respeta” ("This perreo is a protest. Ricky resign and respect our people"), Juan Maldonado, from Guayotea, recalls the crowd chanting.

“We wanted to bring everyone, even those who have never protested before, into the manifestations. We wanted to attract a different type of crowd by speaking the language of our generation,” Maldonado tells Mic. “Reggaeton is to young Puerto Ricans what salsa and merengue is to our parents.”

The many protest songs that have been released have celebrated the very same sectors of the community that Rosselló’s leaked chats criticized, and it's this democratizing power of music that is essential to Puerto Ricans' fight. "Music is movement for our bodies, the very same movement that brought so many Puerto Ricans together,” Maldonado says. “We forgot the debt, our responsibilities, put aside our problems and for one moment, we all share the same problem and responsibility.”

Whether in the form of student strikes or street riots, genres like bomba and plena have always played an influential role in the history of Puerto Rican resistance movements. Today, a politicized trap and reggaeton serves the same purpose: to provide a soundtrack to the fight against a political system that has failed its own people.

“Without music, there is no revolution,” Rivera says. “You popularize the messages and excite people to perceive the world through music.”

More like this
Trump kept a Gitmo prisoner detained for 5 extra years. Biden has finally freed him
By Rafi Schwartz
The protests in Cuba are about much more than the current economic crisis
By Vanessa Taylor
The U.N.'s human rights chief just called for reparations on a global scale
By Vanessa Taylor
Stay up to date