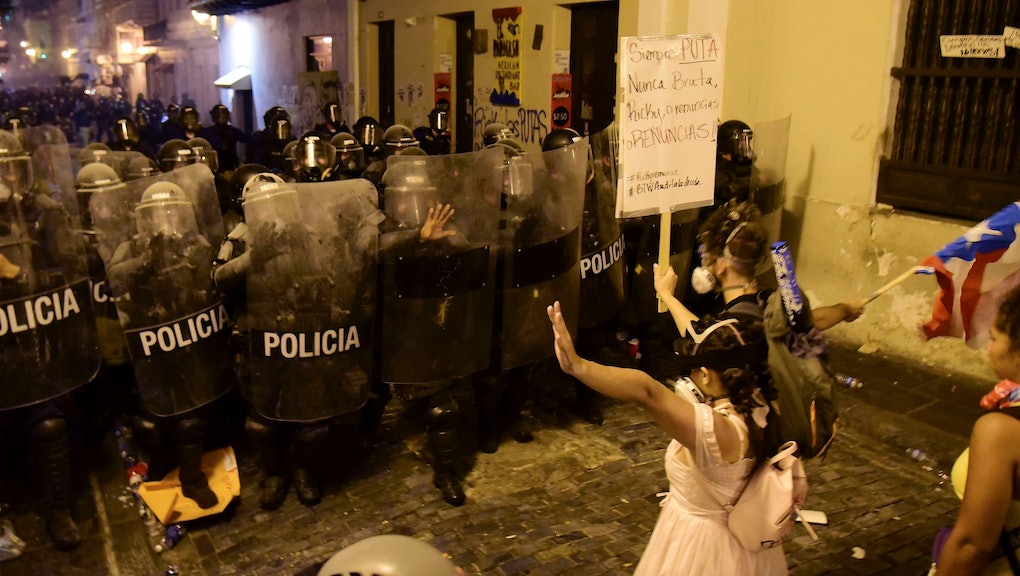 The Puerto Rico protests are only gaining steam, so here's everything you need to know

On Wednesday, July 17. at least 100,000 Puerto Ricans took to the streets of San Juan, calling for the governor of the island, Ricardo Rosselló, to resign. The protests against Rosselló come after years of distrust and discontent from Puerto Ricans, but the catalyst that caused thousands to storm the streets was the content of leaked text messages between Rosselló and his staff, reports CNN. Here's what to know about the protests taking over Puerto Rico.

Puerto Rico has a long history of corruption

For many years, there have been corruption scandals within the most powerful offices of Puerto Rican government (the governor preceding Rosselló, Alejandro García Padilla, declined to seek re-election following a term defined by scandal). Money intended to be spent on education, infrastructure, and healthcare, has been diverted and used on kickbacks. Just recently, on July 10, top officials from former administrations were arrested by the FBI for giving government contracts to politically connected consultants, according to the New York Times.

Since the island entered an economic recession 12 years ago, Puerto Rico has not had a governor serve more than one term in office, and allegations of corruption have plagued Rosselló's administration since he took office.

Rosselló's texts were the final straw

There were also jokes about dead bodies filling up government buildings in the aftermath of Hurricane Maria, the deadly 2017 hurricane from which Puerto Rico is still recovering. A Harvard study estimated that nearly 5,000 people died as a result of the storm, which left the island without power for months on end.

Beyond showing disrespect for the people Rosselló is supposed to be serving, the text messages also suggest that Puerto Rico's problems with corruption did not end with the last government. On Wednesday evening, the CPI published a second incendiary report which connected the texts to the theft of public funds, and alleged that Rosselló was aware that members of his administration were involved in giving kickbacks and government contracts to private clients.

The protests started on July 13

While the protests during the day have been largely peaceful, police and protesters clashed at night. On Monday, police sent tear gas canisters into the crowds after a few protestors threw water bottles at officers.

Wednesday was the fifth day of protesting on the island and had the largest turnout so far. Videos from the night's protest showed fireworks going off behind the line of police, before police again sent tear gas into the crowds. In the video, it is not clear how the fireworks got behind police lines.

Clashes continued into the night, with police using rubber bullets against protesters.

The daytime protest on Wednesday was led by a coalition of some of Puerto Rico's most famous citizens, including rapper Residente, Ricky Martin, Benicio Del Toro, iLe, and Bad Bunny. Bad Bunny left his European tour to be involved, posting messages on social media in support of the protesters already on the island, and calling for young Puerto Ricans to take to the streets.

In an interview with CBS' David Begnaud, who has been on the ground covering the protests since they began, Martin and Residente explained why they joined the calls for Rosselló's resignation.

"This is going to be an example for the next governor," Residente said. "This is a dictatorship right now, the whole country wants [Rosselló] out, and he doesn't want to go out."

Despite several days of calls for his resignation, Rosselló has not budged. On Tuesday he told a crowd of reporters during a press conference in San Juan that he would not step down. "I will continue my work and my responsibility to the people of Puerto Rico," Rosselló said, according to CNN.

After Wednesday's protests, the governor still refused to resign. In a statement shared with reporters, Rosselló condemned protesters who clashed with police, but said that he respected the mass demonstrations against him.

"In the past few days I have apologized to the Puerto Rican people and that request remains alive," Rosselló's statement read. "I have the commitment, stronger than ever, to carry out the public policy for which so hard in all areas of government."

Trump has weighed in

On Thursday, President Donald Trump responded to the corruption allegations against Rosselló by calling the Puerto Rican government corrupt. As Puerto Ricans organize against a governor they claim has not served them, Trump has instead decided to attack the Mayor of San Juan, Carmen Yulín Cruz. Yulín Cruz has been an outspoken critic of both Trump and Rosselló.

In the same tweets, Trump implied that too much money was given in financial relief following Hurricane Maria. The president has been accused of neglecting Puerto Rico in the aftermath of Hurricane Maria, and many believe Trump failed to divert adequate funding and resources to the reconstruction of the island. Although Trump claims that Congress gave 92 billion dollars for hurricane relief, according to CBS News, Puerto Rico has actually received only $11.2 billion in aid from FEMA and other federal aid agencies.

Although he's tweeted about the current situation on the island, Trump has not directly addressed the calls for Rosselló to resign. However, on Wednesday, protests in New York City, Miami, and Orlando coincided with the massive demonstration in San Juan. In New York, Lin-Manuel Miranda joined hundreds at Union Square, where calls for Rossellós resignation could be heard.

With Rosselló showing no signs of stepping down, and the protesters vowing to stay in the streets until he leaves office, the people of Puerto Rico and their governor seem to be at an impasse. It's unlikely the unrest will end soon.

More like this
Ted Cruz, you dunce, you Eddie Munster-looking nincompoop, it's time to log off
By Rafi Schwartz
Vaccines are good. Threatening to evict someone over them is not
By Rafi Schwartz
After 9/11, the U.S. leaned into security theater. Here's how that's playing out 20 years later
By Vanessa Taylor
Stay up to date