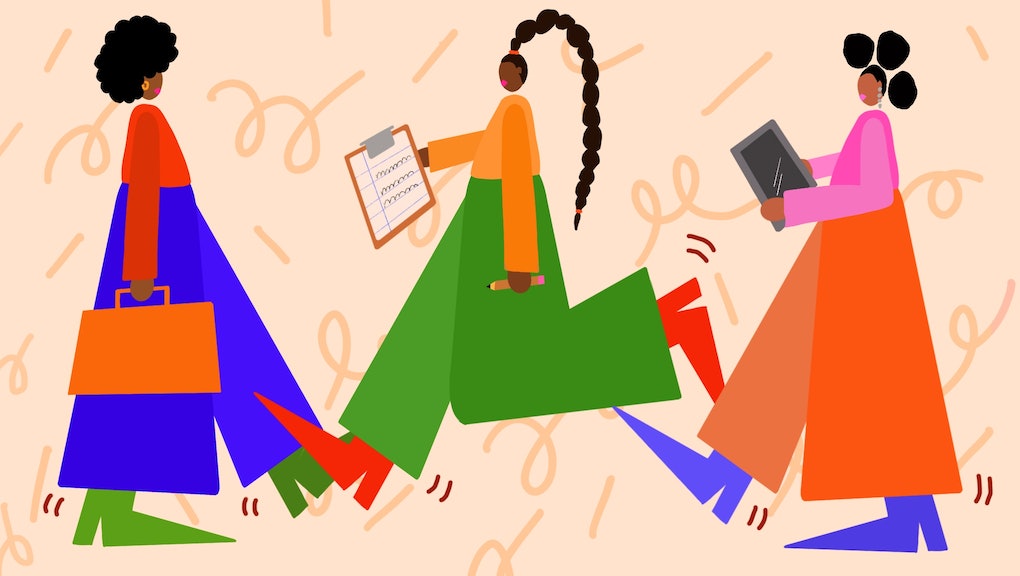 I can vividly remember starting 5th grade at predominantly white school. “Don’t let them put their hands in your hair," my mother warning before I went to school with a picked-out afro for the first time.

When I got to the classroom, I was instantly met with widened blue eyes and open-palmed hands. It took my teacher — who was also a Black woman — raising her voice to get the students to focus on the assignment versus my appearance.

Unfortunately, the sort of situation where Black hair is somehow both other’d and fetishized is not isolated to youth-based ignorance. Many Black Americans have found themselves at the center of hurtful, exploitative, and discriminative dilemmas simply due to the way that they have chosen to style their hair.

Fast forward several years: The CROWN Act is an honest attempt at addressing what Black women and girls endure for simply expressing their identity. Originally a California law that combats discrimination based on a person’s hair style by extending legal protection to them, it’s the first legislation of its kind. And while several states (including New York and New Jersey) have hopped on board, there’s still a long way to go. A part of that journey is figuring out how to implement the spirit of the Act — to combat hair discrimination — at work.

Adding the tenets of the CROWN Act to HR handbooks and educating all employees about hair discrimination should be a no-brainer. In many areas, and Black folks have been expelled from school, denied jobs, and harassed all for wearing their hair the way it grows out of their head.

Waukeen McCoy, a California-based civil rights lawyer, told Mic about several experiences he’s had with children being traumatized at school from reactions to their natural hair. Two children in particular still have a pending case against the school, as the 4- and 5-year-old were ostracized by their peers and suspended by administrators because of their hairstyles, McCoy says.

McCoy says this treatment continued for weeks and weeks because the families refused to change the kids’ hair, and even though the community came out to support them in a protest, they were ultimately expelled from the school. Two years and several phone and board hearings later, the school board has reportedly changed the biased policy that started the issue in the first place, but the families didn’t receive any compensation, he says.

So indeed, the prejudice makes itself evident early. McCoy also tells Mic about a high school senior in Texas that was threatened with not walking at her graduation due to her colored braids. An 11-year-old child was told by his school that his hair was too long, and even though his mother obliged and trimmed, braided, and pinned his hair, he ended up within in-school detention — for his hair. Unsurprisingly, the CROWN Act wasn’t passed in Texas’ House this year.

This perpetuation of white supremacy is intentional, and it creeps all the way from the classroom to the boardroom. Donna Davidson, a Philadelphia-based writer, had a very telling experience when she was finishing up college at Spelman, an HBCU. Their send-off for students encompassed a multi-part seminar, one of which covered professionalism in the job market. One of the major goals of the seminar, she says, was to encourage the students to appear professional in the workplace. Apparently, this included ensuring that the Black women straightened their hair.

It is important to note that everyone is capable of perpetuating or internalizing the harmful rhetoric surrounding Black hair. Davidson recalls a teenage experience when her hairdresser defied her mother’s wishes to keep her natural. The stylist gave her a chemical relaxer, instead, before braiding in her extensions. Davidson remembers the hairdresser tousling her hair and huffing about how “ridiculous” it was that it was so “difficult.”

The idea that natural, kinky hair is a problem to be solved is an ancient one that exists both in and outside the community. The harmful concept needs to be wiped out, once and for all — and that means normalizing Black hairstyles at home, on the streets, and at work.

Not everyone believes that the CROWN Act is enough to change the tide — which is fair. Will my wearing box braids to a corporate meeting eradicate racism? Unlikely. But, it will likely force many organizations and businesses to put regulations that support us on paper, hopefully sparking change in office culture that enables Black staff to feel safe and show up as their authentic selves.

Especially after last summer’s “racial reckoning,” HR teams all over the country have put an emphasis on addressing inclusion and discrimination at work. It’s time to commit to tangible actions and follow through with them. Brooke Taylor, a Virginia-based diversity, equity, and inclusion consultant says that inclusivity practices need to permeate throughout the entire company or organization, starting from the top.

Taylor’s role as an equity-focused consultant ranges from 1:1 sessions with marginalized employees to company-wide racial sensitivity training. The work to truly push for a diverse and welcoming workplace is not quick or easy, but it is clear when an organization is committed, they say.

“If a company is serious about diversity, equity, and inclusion, they will incorporate that and trauma-informed practices in every aspect of their business structure, starting with their bylaws or their board,” Taylor says. “It is seen clearly in their mission and values statements.” In other words, the CROWN Act is important, but this is what it means to bring the sentiment of the Act to work.

But, Taylor adds, incorporating those policies isn’t always going to ensure that the actual practices of the company will change. That takes a commitment from the higher ups, alongside the rest of the company, to really make sure Black employees feel safe “to be their authentic selves, and be held accountable when that doesn’t happen,” they say.

This could look like troubleshooting hiring practices to lessen the influence of leadership bias, diversity review boards where employees of color are compensated for their time, or outsourcing their HR departments to ensure discretion around discrimination complaints. Taylor says that while passing bills isn’t a step that should be skipped over, it is just one piece of the puzzle. “I don’t believe that policies change hearts and minds, but a company can take a hard-lined stance for their employees of color, regardless of a federal mandate," they add.

You can write into the company’s policies that all hairstyles are welcome, but how do your staff of color feel when they wear their hair out to work? Do you have Black women in leadership that rock their natural coils?

“It’s about creating that culture of not only accountability, but transparency,” Taylor says. The bottom line is that it shouldn’t require a law for companies and organizations to stand up for their employees. Everyone deserves to feel comfortable in their own body, sans unwanted attention, judgement, and definitely without the fear of your employment being in jeopardy.