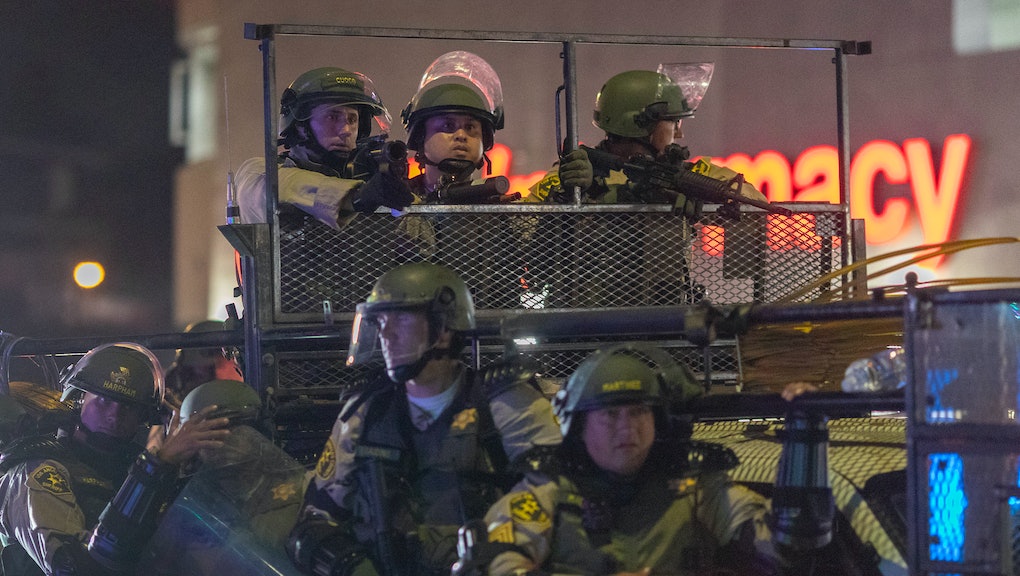 How the U.S. taught its police officers that protesters are "the enemy"

The unrest sparked by the death of George Floyd after being pinned to the ground by the knee of a Minneapolis police officer has left parts of U.S. cities looking like a battle zone.

Night after night, angry protesters have taken to the street. So too have police officers dressed in full riot gear and backed by an arsenal that any small military force would be proud of: armored vehicles, military-grade aircraft, rubber and wooden bullets, stun grenades, sound cannons, and tear gas canisters.

The militarization of police departments has been a feature of U.S. domestic law enforcement since the 9/11 attacks. What is clear from the latest round of protest and response, is that despite efforts to promote de-escalation as a policy, police culture appears to be stuck in an “us vs. them” mentality.

Setting up the enemy

As a former police officer of 27 years and a scholar who has written on the policing of marginalized communities, I have observed the militarization of the police firsthand, especially in times of confrontation.

I have seen, throughout my decades in law enforcement, that police culture tends to privilege the use of violent tactics and non-negotiable force over compromise, mediation, and peaceful conflict resolution. It reinforces a general acceptance among officers of the use of any and all means of force available when confronted with real or perceived threats to officers.

We have seen this play out during the first week of protests following Floyd’s death in cities from Seattle to Flint to Washington, D.C.

The police have deployed a militarized response to what they accurately or inaccurately believe to be a threat to public order, private property, and their own safety. It is in part due to a policing culture in which protesters are often perceived as the “enemy.” Indeed teaching cops to think like soldiers and learn how to kill has been part of a training program popular among some police officers.

Police militarization, the process in which law enforcement agencies have increased their arsenal of weapons and equipment to be deployed in an array of situations, began in earnest in the aftermath of the terrorist attacks on Sept. 11, 2001.

In the years that followed, domestic law enforcement in the United States began a strategic shift toward tactics and practices that employed militarized responses to even routine police activities.

Much of this was aided by the federal government, through the Defense Logistics Agency’s 1033 Program, which allows the transfer of military equipment to local law enforcement agencies, and the Homeland Security Grant Program, which gives police departments funding to buy military-grade weapons and vehicles.

Critics of this process have suggested that the message sent to police through equipping them with military equipment is that they are in fact at war. This to me implies that there needs to be an “enemy.” In cities and, increasingly, suburban and rural areas, the enemy is often those “others” who are perceived to be criminally inclined.

The consequences of this militarized police mentality can be deadly, especially for Black Americans.

A study of police-involved deaths between 2012 and 2018 found that on average, police kill 2.8 men every day in the U.S. The risk of death at the hands of an officer was found to be between 3.2 and 3.5 times higher for Black men compared to white men.

And there appears to be a correlation between militarization and police violence. A 2017 study analyzed spending by police departments against police-involved fatalities. Summarizing their results in The Washington Post, the authors of the study wrote: “Even controlling for other possible factors in police violence (such as household income, overall and Black population, violent-crime levels and drug use), more-militarized law enforcement agencies were associated with more civilians killed each year by police. When a county goes from receiving no military equipment to $2,539,767 worth (the largest figure that went to one agency in our data), more than twice as many civilians are likely to die in that county the following year.”

And it isn’t just individuals who suffer. Behavioral scientist Denise Herd has studied the community effect of police violence. Writing in the Boston University Law Review earlier this year, she concluded that “violent encounters with police produce a strong ripple effect of diminishing the health and well-being of residents who simply live in areas where their neighbors are killed, hurt, or psychologically traumatized.”

The trauma from the video of George Floyd in clear distress while a uniformed officer knelt on his neck is evident in the reaction it has provoked.

The need to address the escalation of police confrontations — both during protests and in individual encounters — was a focus of the last big push for police reform, after the killing of an unarmed Black man in Ferguson, Missouri, in 2014. As with the case of George Floyd, it led to violent scenes in which protesters confronted militarized officers.

Just months after the Ferguson unrest, President Barack Obama set up his Task Force on 21st Century Policing. It recommended the implementation of training and policies that “emphasize de-escalation.” It also called on police to employ tactics during protests “designed to minimize the appearance of a military operation and avoid using provocative tactics and equipment that undermine civilian trust.”

By the evidence of the last few days, a number of police departments have failed to heed the message.

This article was originally published on The Conversation by Tom Nolan at Emmanuel College. Read the original article here.

More like this
Biden's new office to fight for environmental justice already faces an uphill battle
By AJ Dellinger
Brain scans revealed how racism weighs on Black women's health
By Sierra Carter
Vaccines are good. Threatening to evict someone over them is not
By Rafi Schwartz
Stay up to date