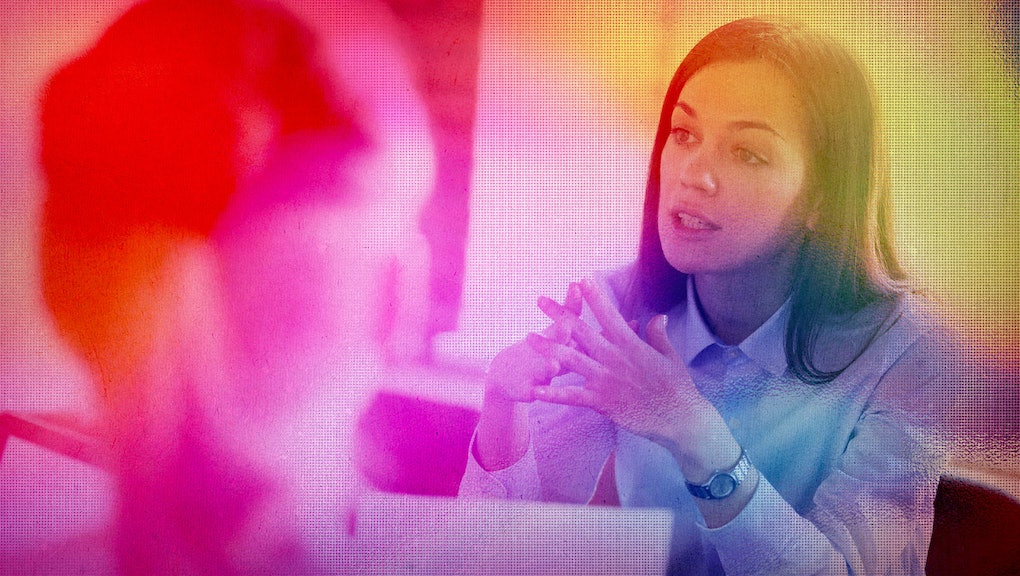 How to come out as LGBTQ+ at work, according to people who did it

Thanks to ever-changing environments and situations, LGBTQ+ people often spend a lifetime pronouncing their identities. In the professional world, this can often prove challenging, as revealing your personal information to clients, supervisors, and team members is an intimidating concept. There's absolutely no fail-safe way to come out at work — and if you're not ready, you absolutely don't have to do it at all. But if you are ready, here are some methods used by queer professionals that can sometimes help ease the process.

For Marquise McCoy, corporate communications manager at LinkedIn, the concept of coming out at work was “both scary and near-and-dear to my heart," he tells Mic. After all, he adds, "Once you come out of the closet [at work], there is no going back." To make the process easier, McCoy first made sure he had peers he could trust and confide in, as finding a work friend or colleague to start your coming out conversation, he explains, can make the later discussion with supervisors feel far less overwhelming.

"Having support and the feeling of having someone fully in your corner is invaluable, and it may be the added comfort you need to fully be yourself, inside the office and out," says McCoy.

Today, he sees his decision to come out at work as key to his achievements. "To be successful at my job, I needed to be present with my full self," he says. "Speak your truth honestly and authentically, always. For me, that meant owning my truth and being proud of my partner of four years, and not covering parts of myself that I’ve worked most of my life to hide."

Unfortunately, not everyone has a support system in the workplace. Fashion publicist Tyler Martin tells Mic that she'd long felt socially isolated at her company, and she was suspicious that telling people about her private life would spur gossip. "Coming out as a queer woman, while there were already plenty of out gay men in the office, just felt like it was further isolating me because now there was another thing that made me different," she recalls.

Martin did tell a few people about her identity, but the experience inspired her to look for a new position at a company where she wouldn't need to seek out specific allies, but could have greater faith in the institution's support. She wanted a place, she explains, where she could be "comfortable not just existing, but comfortably thriving in the company culture."

Luckily, she found one. Martin's new job, as a publicist in the tech industry, comes with a liberal work culture and a non-discrimination policy. Because she felt confident that her co-workers wouldn't take issue with her sexuality, she used her office Halloween party to introduce her partner to her colleagues and "let everyone know I’m queer without having to formally say it," she says.

As Martin's situation shows, publicizing your identity at work doesn't have to take the form of a major announcement. Mentioning your partner or your weekend plans can often suffice for casually coming out. "I try to look for honest moments to share my life without making it a big deal," McCoy says, adding that if you're already out on social media or in another public way, you might not even need to specifically address your identity at work because your co-workers might already know.

It's possible that even if you do decide to officially announce your identity to your colleagues, they won't react as strongly as you expect. McCoy notes that when he decided to come out at work, he found that although everyone voiced their support, nobody actually cared about his orientation.

For transgender or non-binary folks, however, coming out can be a big deal, whether you want it to be or not. If you're starting to transition or your physical appearance is changing in a noticeable way, your co-workers or clients might have questions or make comments. You only have to reveal what you're comfortable with, but if you're worried about how to address the situation (especially if you're one of the only trans people at the company), having a conversation with a trusted colleague might help.

"If you are transgender, you may wish to discuss your personal situation with a trusted manager, supervisor, or human resources professional before coming out to co-workers," suggests the Human Rights Campaign on its website.

In some cases, though, coming out is unfortunately not a safe option, no matter who you talk to. A May 2019 study commissioned by the career website Glassdoor found that 53% of LGBTQ+ employees face harassment at work. Additionally, more than half of American states do not offer any type of protections for LGBTQ+ employees in the workplace.

If you don't think that you'll have help from your company in coming out, "there are outside resources you can turn to such as Out & Equal or the Equal Employment Opportunity Commission to address workplace discrimination," says Glassdoor’s senior director of corporate communications, Scott Dobroski. These resources, as well as Glassdoor's Workplace Guide for LGBTQ+ Professionals, offer tools and contacts for LGBTQ+ people regarding protection in the workplace.

In addition to those resources, McCoy notes that joining, or perhaps even starting, an online group for LGBTQ+ people can be a huge help in terms of finding allies (he's a member of LinkedIn's Out@LinkedIn group, for instance). He also recommends trying to find a mentor, even one outside of work, who can advocate for you and your coming out journey, especially if you don't have trusted peers at the office.

Really, though, whatever makes you feel safe and supported is key. "Everyone’s level of comfort is different, so there isn’t really a right way to come out at work," Martin says.

More like this
The pandemic is not an excuse to misgender me
By Tracey Anne Duncan
Easter is one of the few days I can flout gender norms without my parents' judgement
By Joseph Lamour
How to file your taxes: A beginner's guide
By Melissa Pandika
Stay up to date