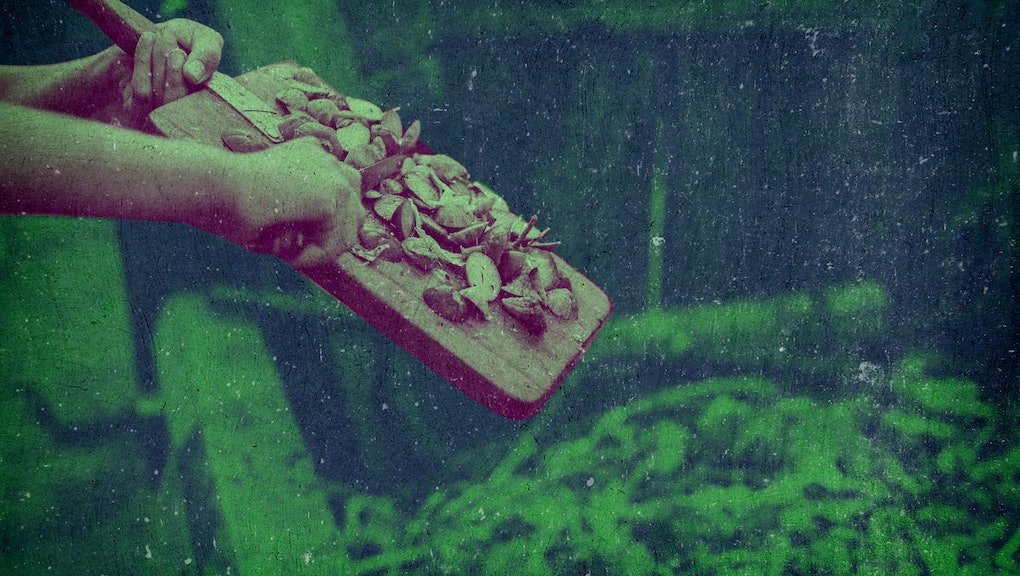 Every year, Americans contribute millions of tons of trash to landfills, where it releases greenhouse gases that contribute to the increasingly dire climate crisis. According to the Environmental Protection Agency, of the 262 million tons of waste generated in the U.S. each year, nearly 30 percent of it is compostable food and yard waste — but only nine percent of it actually gets composted. That means 51 million tons of waste unnecessarily ends up in landfills. That’s a problem. Another problem? Many people don't understand how to compost food scraps — and how easy it is to turn the trash they're producing already into something productive.

While it may seem harmless to toss your dinner leftovers or a biodegradable pizza box in the trash — because, hey, they’ll decompose eventually — the reality is far different. “When organic matter is put into landfills, it is compacted underground and usually does not have access to oxygen,” Siavash Ghazvinian, co-founder of EthicalTree, tells Mic. Trapped in plastic garbage bags and among tons of additional waste, food breaks down much more slowly than when it has oxygen and “generates high amounts of methane gas, which is a large contributor to climate change,” Ghazvinian adds.

Composting, on the other hand, breaks down food and other biodegradable products in a way that doesn’t release any methane, Jeff Yorzyk, the associate director of sustainability at HelloFresh, tells Mic. “Composting is the process of recycling organic matter — such as kitchen scraps, food waste and yard waste — into nutrient-rich fertilizer,” he says. “The composting process combines microorganisms with water and air to break down organic materials quickly and effectively. This creates a useful end product that reduces the need for synthetic fertilizers and reduces greenhouse gas emissions.”

Not only is composting preferable to throwing food in the trash, but it’s also better than sending it down the garbage disposal in your sink. “Composting returns food waste back to the environment in its most useful form,” Yorzyk says. “When we put food waste down the garbage disposal, it goes to a wastewater treatment plant where, after treatment, it becomes sewage sludge that also has to be handled properly. ...Some sewage sludge finds its way back to the land, and some [is] even composted, but it requires extensive treatment to remove pathogenic bacteria and can carry contaminants from other wastewater sources.”

Of course, understanding the benefits of composting and actually doing it are two different things — and considering how rare the process still is, the idea of it can certainly be overwhelming and even a bit confusing. But, as Ghazvinian says, “anyone can compost, and everyone should compost.” Here’s how.

How much space you need for home composting?

You don’t need an acre of land — or even a big backyard — to compost at home. It’s even possible if you live in an apartment. For outdoor composting, “you need a collection bin in the kitchen, which can be as small as a large coffee can, and a place for a compost pile outside,” Yorzyk says. “You will need about 25 square feet for an outdoor composting machine, and 25 to 100 square feet if you want to manage your own compost pile.” But if you don’t have that kind of space, he notes, there are also options for indoor composting machines. You can also opt for vermicomposting — which uses worms that eat your waste and convert it to compost and requires only one relatively small bin.

If all of that is still too much, you can look into municipal or private composting services in your area, so all you have to do is gather your scraps for pick-up or drop-off, and let the pros do the dirty work.

What can you compost?

It’s a long list, and includes more than just what’s in your refrigerator. Yorzyk says “almost anything organic” is compostable, including “food trimmings and scraps, spoiled food you never got to eat, eggshells, apple cores, banana peels, used tea bags, coffee grounds (without the [external pod, like a] K-cup), avocado pits, old Halloween pumpkins, old herbs and spices, and — as long as they aren’t diseased — dead plants, and plant [and] flower trimmings.”

While you technically can compost meat and dairy; many experts advise against it because, as the EPA notes on its website, those products tend to attract pests and cause odor issues. If you’re set on composting that kind of stuff, though, there are ways to do so successfully, as explained by SF Gate. If you use a service, make sure they allow animal products.

What can’t you compost?

Aside from (potentially) meat and dairy, Yorzyk says you should avoid composting pet waste (it “can introduce bacteria and diseases into the compost pile”); fats, grease and oils (“a little grease on a pizza box is fine, but much more than that is a bad idea”); and any inorganic items like metal, glass and plastic (“think: ‘it didn’t grow’”). “There are compostable plastics out there, but most of them are not suitable for home composting unless they say ‘home compostable’ right on them,” Yorzyk says.

What materials do you need?

It doesn’t take much. “All you really need is an enclosed bin with some aeration holes to keep critters out and allow access to oxygen,” Ghazvinian says. If you’re composting outside; you just need a small collection bin to keep in your kitchen (so you don’t have to take every individual food scrap out). Technically, any bin will do, but to minimize smell and mess, it’s a good idea to get a stainless steel bin with a filter that traps odors. If you want to get a liner to make clean-up even easier, go with one that’s compostable as well.

“For outdoor composting, you might want a rotating drum, or a space for a pile you plan to manage on your own,” Yorzyk says. “There are many creative solutions for this, including using old tires and chicken wire, but you should leave that for the more experienced composters.” If you don’t use a rotating drum, make sure you have a pitchfork or shovel so you can stir the pile manually.

If you’re composting inside, you’ll need a machine (like those previously mentioned), or a bin for vermicomposting (which can literally be a large storage bin that you cut holes in).

How does it actually work?

The process is “basically alternative between ‘green’ and ‘brown’ layers that need ventilation in order to decompose properly,” Gena Lorraine, a horticulturist at Fantastic Services, tells Mic. The “greens” (which, per the EPA, provide carbon) include things like food waste and grass clippings, and the “browns” (which provide nitrogen) include things like sticks, dead leaves, and sawdust. Whenever you add “green,” make sure to cover it with “brown,” and keep the mixture moist — but not soaked, Yorzyk cautions — as you go to help break it all down. Lorraine recommends soaking paper strips (browns) in water before adding them to the pile.

“It is important to turn the pile with a shovel or pitchfork at least once a week when it’s getting started,” Yorzyk says. “By doing this, you are giving the compost pile everything it needs for naturally occurring microorganisms to break it down into a useful fertilizer — air, water and food. As the pile grows, it will start to warm up from the microbial activity...and decompose the organic material.”

Once you get a substantial pile, you can stop adding to it and let it do its thing — Yorzyk says some people start a second pile, or store additional scraps in a freezer — or add new material continuously and remove completed compost from the bottom when it’s ready. According to the EPA, you’ll know it’s done when it is “dark and rich in color,” which can take anywhere from two months to two years. Yorzyk notes the time frame is dependent on what you add to the pile, as well as your local weather. For example, according to SF Gate, composting in the dead of winter tends to take longer.

“A well-managed compost pile should not smell,” Yorzyk says. To avoid odor issues, turn your bin or pile regularly (that helps with aeration), and empty your kitchen bin frequently. That said, while you can avoid major odors, you may deal with a little bit of smell in the beginning, before the composting process really gets underway. “A compost pile is a living thing, and everyone has slightly different wastes at home, so you have to find the right mix of waste material, water and turning for your region,” Yorzyk says. “It’s part of the learning curve. Once you get that dialed in, the pile shouldn’t smell.”

If the slight smell is bothersome, Ghazvinian says you can add things like fresh grass clippings, lime, or calcium, to help with the odors.

What if I don’t need all the soil?

One of the benefits of composting — aside from curbing climate change — is the nutrient-rich soil you get as a result. But what if you only have a small planter box on your patio, or no need for soil at all? It doesn’t mean you can’t compost. In that case, a composting service (if available) might be the best fit, because you can still responsibly get rid of your organic waste but the soil can go to someone who will actually use it. (If you do want the soil, some services give you the option to receive a portion of the final product after they do the work.) Yorzyk says some farmers markets also include compost drop-off sites. And if you want to take on the whole project at home, you can donate your resulting soil to friends, family, your city, or other local businesses. “Community gardens and schools are great places to start,” Yorzyk says.

Starting a new project like this can feel like a huge undertaking; but the good news is there’s no lack of help out there. “There are tons of online resources and communities you can tap into, and you [can] probably find some people locally who would be happy to talk you through your first compost pile,” Yorzyk says.

And ultimately, it’s worth it. “Many people think that composting is a big commitment and that it will take a lot of time out of their days,” Ghazvinian says. “In reality, it only takes a couple of minutes to manage, and it makes a huge environmental difference.”