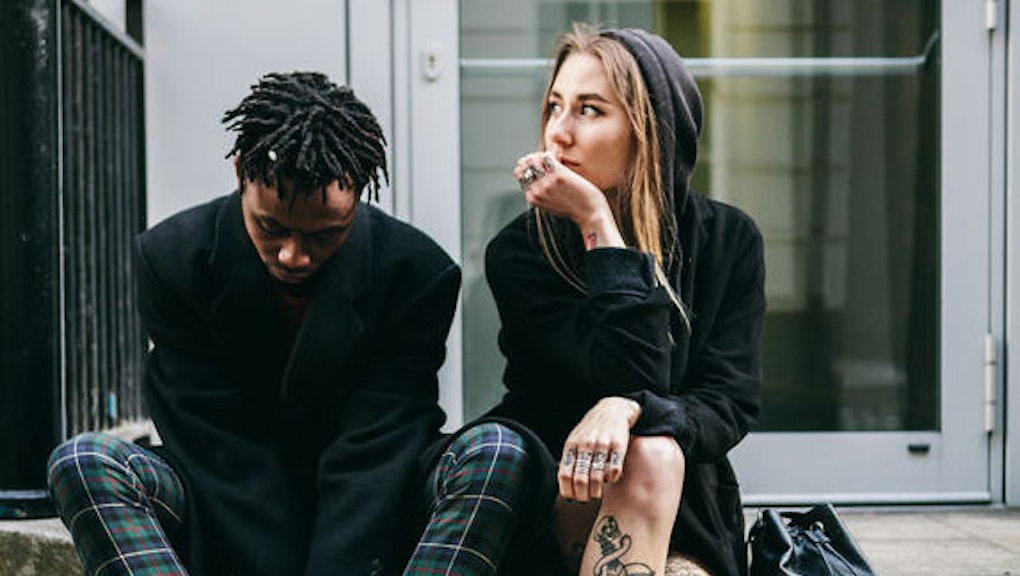 How to fight fair in a relationship

Happy couples argue, and there’s research to prove it. A recent study investigated how people who are in happy relationships argue productively. Researchers found that couples who fight fair picked their battles. Go figure. In happy relationships, they found, people chose battles in which resolutions were possible, like how to divvy up household chores. This may seem obvious, but if you’ve ever been in a relationship, you know how easy it is to get pissy over things that are unlikely to change, or that it’s not really your business to try to change — for example, the way your partner takes care of themself. It’s easy to say abstractly that everyone is in charge of their own body and way harder to watch bae eat a whole baguette when you know they’re gonna bitch later about their gluten hangover.

An important side note to consider: I take issue with a lot of the relationship research out there because it doesn’t seem to apply to me: a queer poly person who is dubious about marriage and co-habitation, but wholeheartedly invested in cultivating caring and comitted relationships. Not everyone wants to permanently hitch their domestic or sexual life up with a romantic partner. Luckily, a lot of new work is being done with queer relationships that notes the differences between queer and hetero communication patterns. And this particular topic — and the research behind it — applies to pretty much everyone.

Whatever kind of relationship structure you’re about, dealing with conflict in healthy ways is crucial. There are rules that we can adhere to when fighting that won’t leave us emotionally wounded or feeling abused. Here are a few of my favorites, personally tested, and couples-therapist-approved.

Argue when you aren’t mad

“The best way to work through disagreements is to schedule a time where both people can be emotionally available to address the issue with intentionality, and not reactivity,” says Shlomo Slatkin, a relationship counselor in Baltimore. This sounds great. I’m all for it. But it’s really hard to have the emotional discipline to schedule conflict. What if you’re mad and the issue feels very urgent? Worse, what if you’ve reached that point of fighting where both parties are endlessly repeating themselves and no one feels heard?

“I always suggest that if a couple is arguing and not getting anywhere, or the argument is escalating, they take a time out. I call this ‘lovingly disengaging,’” says Margaret Paul, a Pacific Palisades-based psychologist. “When people lovingly disengage, they are taking themselves out of range of the argument so that they don’t hurt each other. They can then take a half hour to do their own inner work and get themselves open to learning.” Afterwards, she says, they can return to the conflict with what’s hopefully a slightly shifted perspective.

The point of scheduling disagreements or taking time outs is not to invalidate people’s feelings or pretend like we don’t have them. It’s to ensure that each person is calm enough to communicate their feelings lucidly, hear the other person’s feelings, and come to resolutions..

Have a goal-based conversation

If you need to have a serious talk, identify the issue and what you want to get out of the conversation. Are you looking for a compromise, a resolution, or just to be heard? If you (or your boo) aren’t clear, it is easy to get frustrated and that frustration can lead to a damaging cycle of hurtful insult volleying.

“Couples who are bad at fighting focus on each other. They make their partner the problem rather than letting the problem be the problem.”

But when there are a lot of big feelings about something, how can we tell the difference between an issue that is resolvable and a complaint that is based in murky frustration? “A complaint that may lead to a good fight could be something like ‘We need to set a budget and follow it each month, while a criticism leading to a bad fight could be, ‘We wouldn’t have bad credit if you weren’t so irresponsible,’” says Mutchler. When you’re all riled up about something that feels important, like paying the bills, it’s easy to lose focus.

Staying on task in conflict, in this example, means staying calm enough to do the work of setting up a budget. Blaming someone’s spending behavior, even if it’s a valid complaint, will put them on the defensive. “This usually leads to counterattacks and defensiveness, which pulls the couple farther and farther from the issue they’re supposedly fighting about,” Mutchler says. It’s hard to agree to curb you spending, or any other behavior, when you feel attacked. There’s no shared goal.

You can, and should, have conversations about frustration and hurt feelings, but they also have to be goal-based. In those cases, a goal might be mutual understanding. Every relationship has problems, but in healthy relationships, having a problem doesn’t need to be a problem.

Take responsibility for your own emotions

Most of us know about “I” statements. But a lot of us just trot them out because someone on Oprah said we should and haven’t actually thought much about why it’s important to use them. In case you missed that episode, using “I” statements means starting sentences with statements about yourself instead of making assumptions or accusations. “I feel angry when you leave my texts on read,” is an example. The purpose of this wording is to linguistically signify that you know that your feelings about a situation belong to you. The opposite is blaming, which sounds more like, “Why do you always ignore my texts?”

“When we argue, we like to think that we’re the victim,” says Marion Theis, a UK-based relationship coach, “However, the other person also thinks the same — and that’s where most people stay stuck. When you put your ego aside and accept full responsibility for the situation, that’s when each party feels understood and the resolution can happen.” Coming to the conversation as equals who each take responsibility for their own feelings and behavior ensures that no one has to be the victim, and allows for the possibility that everyone can leave a conversation with their dignity intact.

More like this
Separation anxiety is real for couples who quarantined together
By Tracey Anne Duncan
What happens if platonic best friends decide to get married?
By Nausica Palazzo
The benefits of liquid chlorophyll, explained
By Melissa Pandika
Stay up to date