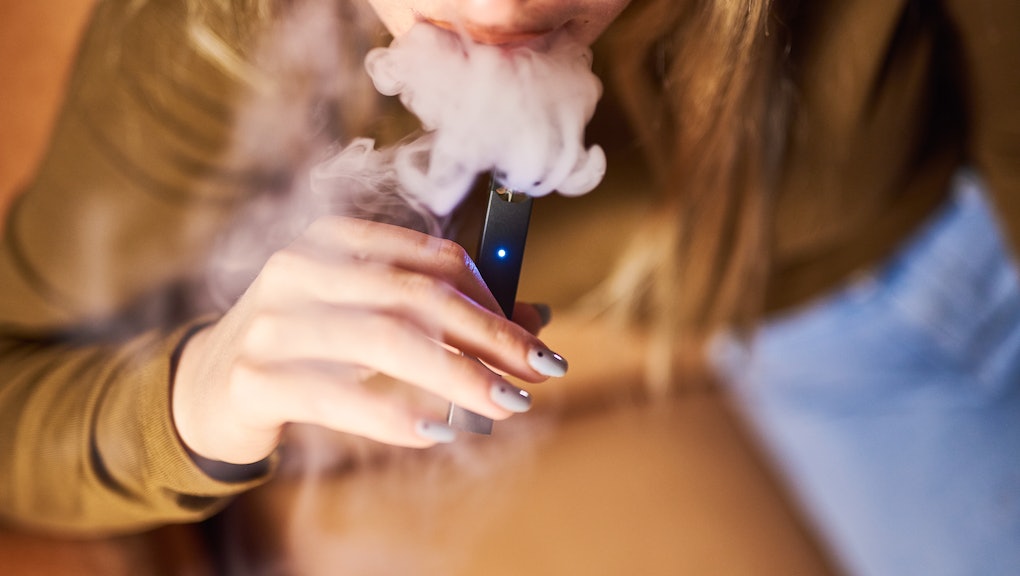 How to quit vaping, regardless of why you started

Mark Russ began smoking as a teenager but switched to vaping to help him quit, with the goal of eventually weaning himself off of vapes. And he actually did quit all of it, after about a year of vaping. Although the 35-year-old lives in Adelaide, Australia, he had been somewhat following the news about the rise in vaping-related lung disease in the US and was angry about the vested interest tobacco companies had in keeping people addicted. Meanwhile, he already wanted to quit vaping, which often left his stomach sore and exacerbated his existing sinus issues. “I was sick of being a slave to it,” he tells Mic. He quit in late September and hasn’t touched a vape since.

Russ describes the quitting process as “a massive change in the body, both physically and psychologically.” The first few weeks were the most difficult. Anxiety, sadness, and agitation constantly gnawed at him. He had intense, often rage-filled cravings, and his appetite was insatiable. Most days, he was so exhausted, he had to nap. After about a month, though, he started feeling better, and he noticed his lungs beginning to function more efficiently.

Quitting vapes may in fact be harder than quitting cigarettes. Because e-cigarettes are relatively new — and have remained mostly unregulated by FDA — we know little about the ingredients of vape juice, including their health effects when inhaled. It’s possible that some of them chemically enhance nicotine, or reinforce nicotine addiction, according to Panagis Galiatsatos, a pulmonary and critical care medicine specialist at Johns Hopkins Medicine and a spokesperson for the American Lung Association. “So much of the e-cigarette topography is unknown,” he says. Even big brands have drawn scrutiny lately; for a while, bootleg vapes were largely blamed for the lung disease cases, but a new lawsuit claims Juul sold a million vape pods they knew might have been contaminated.

Quitting, though challenging, is doable, according to physicians and those like Russ who have gone through the process themselves. And while he was of the cohort who went from cigarettes to vapes, quitting advice stays pretty consistent even if you started vaping without ay history of smoking anything else. For everyone and anyone, here are some steps you can take that could make cutting the habit more bearable.

Consider working with a healthcare professional

Seek out medical guidance if you have a health condition, since nicotine does have cardiovascular effects, and definitely talk to a doctor if you’re pregnant, says Elisa Tong, an internal medicine physician at UC Davis Health. Otherwise, you don’t absolutely need the supervision of a healthcare professional to quit, but if you have a severe nicotine addiction — if you’re going through around a vape pod per day to day-and-a-half — it’ll improve your chances of success, Galiatsatos says. They can work with you to develop a plan to quit, and help you stay on track. It may take multiple tries for you to quit for good, Tong says, in which case the high levels of support a professional can provide will be especially crucial.

If you do seek professional supervision, Galiatsatos recommends asking for a tobacco treatment specialist, although a primary care provider or any healthcare professional will do, as long as they can consistently reinforce a treatment strategy and check in with you on a daily or weekly basis. A quit line counselor, who you can reach by calling 1-800-QUIT-NOW (1-800-784-8669), can also help, Tong says. Although they’ve historically helped people quit regular cigarettes, they now use the same framework for counseling people on how to quit vaping.

Working with a healthcare professional might also be a good idea if you’re a young person, since patches and other nicotine replacement therapies have been tested in adults, but not really in 18- to 24-year-olds, Galiatsatos says. Tong also suggests asking a pharmacist to help you titrate the dose of nicotine you receive from replacement therapies, which can be tricky to do on your own.

Identify why you started vaping in the first place

Your motivations for vaping may differ depending on whether you smoked a regular cigarette before you began vaping. If you began vaping but didn’t previously smoke, you’re probably an adolescent or young adult, a trend Galiatsatos has noticed in his clinical experience, which he suspects mirrors national trends.

Intrinsic factors play a bigger role in reinforcing vaping in his younger patients; for many, vaping is wrapped up in their identity or a need to belong, since most of their friends are doing it. If you fall into this group, a healthcare professional can help you pinpoint peer pressure and other social barriers to quitting, and develop a plan for dealing with them.

If you used to smoke, on the other hand, you probably switched to vapes because you thought they were safer than regular cigarettes, an assumption you may still need to challenge, Tong says. “Don’t perceive vaping as stopping smoking,” Galiatsatos cautions. “Your lungs are not designed to take in those inhalants.” Indeed, while vape plumes may contain lower concentrations of toxins than regular cigarettes, they can harbor harmful substances not found in regular cigarette smoke, per the CDC. Tong adds that vapes aren’t meant to be used indefinitely.

Figure out an action plan for cravings and withdrawal

Plan ahead for cravings and withdrawal symptoms, such as anxiety and irritability, which are typically worst in the first week or so of quitting, Tong says. A quit line counselor or health provider can lend you hand here.

Nicotine lozenges or gum can help curb cravings, Tong adds, as can engaging in a behavior that replaces vaping, such as chewing carrots or sunflower seeds, taking a walk, or drinking a glass of water. Learn to recognize your triggers, such as social situations or stress. Medication such as the daily patch or a prescription nasal spray can help reduce withdrawal symptoms.

“I can’t emphasize enough how much strength one can gain from having a goal,” Russ says—in his case, completely quitting vapes and nicotine — “then digging your heels in and saying, no matter what, I’m going to get through today without both of them.” He would say the same thing to himself when he woke up each morning, repeating it amid cravings and other uncomfortable moments, and reassured himself that these would eventually pass.

Russ says that sharing his withdrawal symptoms on Reddit with others who were experiencing, or have experienced, the same was extremely helpful. They not only offered tips and advice, but also validated his struggle. Finding a support group, whether online or in-person, could do the same for you.

Before he quit vaping, Russ found himself easily winded and with little energy. “The transformation once quitting vaping was huge,” he says. “I noticed it after a few weeks.” As with Russ, quitting may very well be one of the most challenging undertakings of your life, but its health benefits make it worthwhile. It’s not impossible, and you needn’t go at it alone.

This article was originally published on November 1, 2019