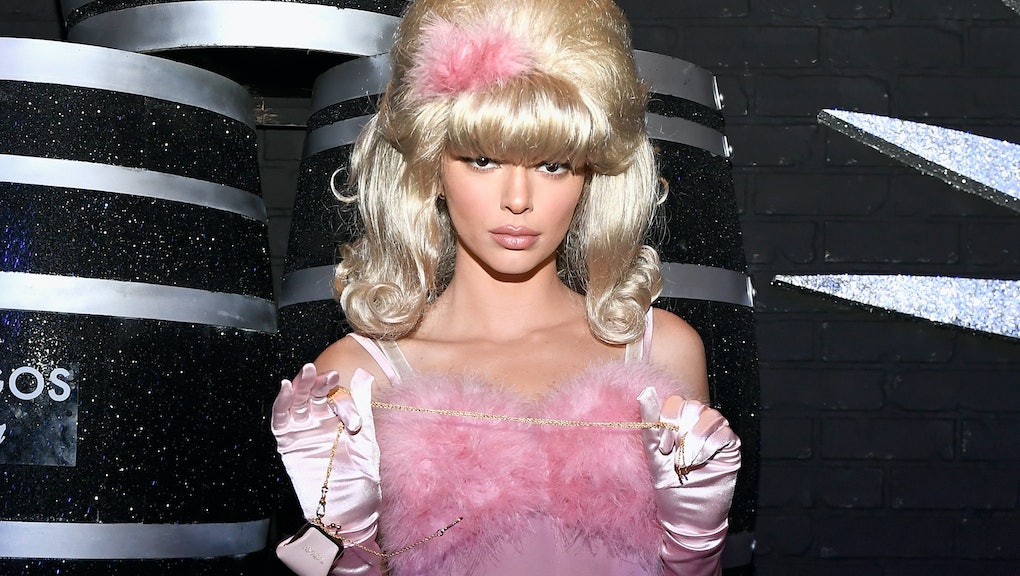 How to role-play without feeling super awkward

Men’s fashion at its most buttoned up really does it for me. Period drama, particularly: both the early 1950s-60s suiting of Mad Men or the Regency-era gentleman in ornate jackets and breeches in Bridgerton have this effect on me. It may be the put-togetherness, historical style, and complete absence of cargo shorts, but whatever it is, a man properly dressed from either time period could get it. The thought has crossed my mind, more than once, to take this idea a step further and have a consenting partner dress up like a 1800s royal. But asking a partner to enact a scene in the bedroom with me, a.k.a. role-play, is not a fetish I’ve ever really tried before. Because of this, and because knowledge is another fetish of mine, I asked someone in the know about the best way to go about it.

As to what goes into a successful, enjoyable, and pleasurable role-playing scene, first make sure everyone involved is into it, obviously. “I usually recommend asking for consent for the conversation and scheduling it in advance at a neutral time and setting, if possible,” says Dulcinea Pitagora, a New York City-based psychotherapist. Still, putting all of your cards on the table is crucial: Take the direct approach, but make sure to prime whoever you’re asking with due consideration. Once you have a time set with each other to speak about something potentially NSFW, you both can be primed for that conversation.

“Setting yourself up for success in a conversation about sex means that everyone is into the conversation, and is feeling well rested, fed, and supported, since it can feel vulnerable to talk about sex in a new way, Pitagora says. It’s much easier to have a non-threatening conversation about sex when it’s not right before or during sex, as everyone tends to feel less pressured, and it’s easier to consent or not consent to move forward when not under the influence of sexual desire. For people who hate surprises (like me) a sexual surprise you definitely aren’t into is probably the worst kind.

After this conversation, you both may need a little time to think about it, so allow yourself time to process and think about it, maybe order some skinny ties and martinis glasses, and perhaps revisit the idea later, if everyone is cool with the idea. “It’s important to explore reticence, not with an agenda of coercion or convincing, but with the goal of understanding one’s partner better,” Pitagora says. “These kinds of conversations can lead to bonding and increased intimacy, which can lead to a better sex life whether or not the role-play in question is explored.” Basically, openness and honesty are super hot.

If everyone is a thumbs up, then talk logistics. A discussion of what you want out of role-playing is super important. “The negotiation of roles, common interests, boundaries, and soft and hard limits not only defines the roles and interaction, but also creates a sense of collaboration that is connecting and intimate,” Pitagora says, adding that the all to important consent portion comes before the scene — not during — a role-play scenario. This pre-gaming can make the actual role-playing go a lot smoother.

That being said, it's important that you confirm with each other that everything is going well while in the scenario, in the form of check-ins during the role-play. A safeword (an actual word, or phrase, or gesture) is usually the move, but if either of you would rather be more direct with your communication, that’s perfectly fine too. Just make sure to confirm the method you plan on using beforehand.

A big reason I haven't delved into role-playing yet is thanks to my hyper self-awareness: I just know that at some point, I’ll feel like I’m acting poorly or let the nerves take hold, like I’ve forgotten my lines in a terrible, nude community theater production. But, if you’re like me, rest assured that it’s completely normal to feel silly at some point, just like it is with all intimate interactions. A little comedy can be a welcome turn-on, sometimes.

“Sex can often be awkward, funny, while at the same time being hot, or fluctuating between hot and not hot,” Pitagora says. As long as you’re open and leave any judgement out of the situation, you’re more likely to keep everyone happy. “Sometimes it takes a few tries to get in the groove of a new role-play, and at that point partners can drop into character, experience a spike in the hotness factor, which can cancel out any embarrassment.”

The last part of the puzzle is aftercare, which is the collaborative process of care and attention paid to all parties — particularly the more emotionally and physically spent participant — after the role-play is over. This is an actual section of a successful scene, as in, you must do it. Aftercare, Pitagora tells me, can help everyone to return to a baseline cognitive and emotional state. It’s not ideal to just yell “cut!” and return to your everyday personalities, y’all. “Aftercare can involve deconstructing the scene and what worked and didn’t work,” Pitagora says, adding that this can also take the form of cuddling, snacking, making out, and basically whatever all parties agree is soothing and helpful.

Last crucial note: You don’t have to love it. Once you’re back into an everyday headspace, one of you might reach the conclusion that you were not into it. And the other person may have loved it. It’s okay to feel that way, and it’s great timing to discuss how to move forward, especially if someone wants to, but can’t with a partner who didn’t like it. “Sometimes people who are otherwise monogamous-inclined find it less threatening for their partner to engage in a role-play with someone else because it’s not the kind of sex they typically have,” Pitagora says — but for those of you who are monogamy-minded, don’t worry, your relationship can say in tact. In monogamy’s case, it’s important for you both to default to activities you both agree on, but consider new ways to explore that the partner who really didn’t like it might enjoy.

As long as you both are open about the role-play and everything involved around it, both ahead of time, during the scene, and afterwards, you’ll be in the best frame of mind for it. Basically, your communication with each other gives roleplay an easier entry (pun intended) into your sexual repertoire.

More like this
Does edging really make orgasms feel better?
By Melissa Pandika
Your smaller pandemic friend group is actually a good thing
By Joseph Lamour
Choose-your-own erotica books let you customize your horniness
By Tracey Anne Duncan
Stay up to date