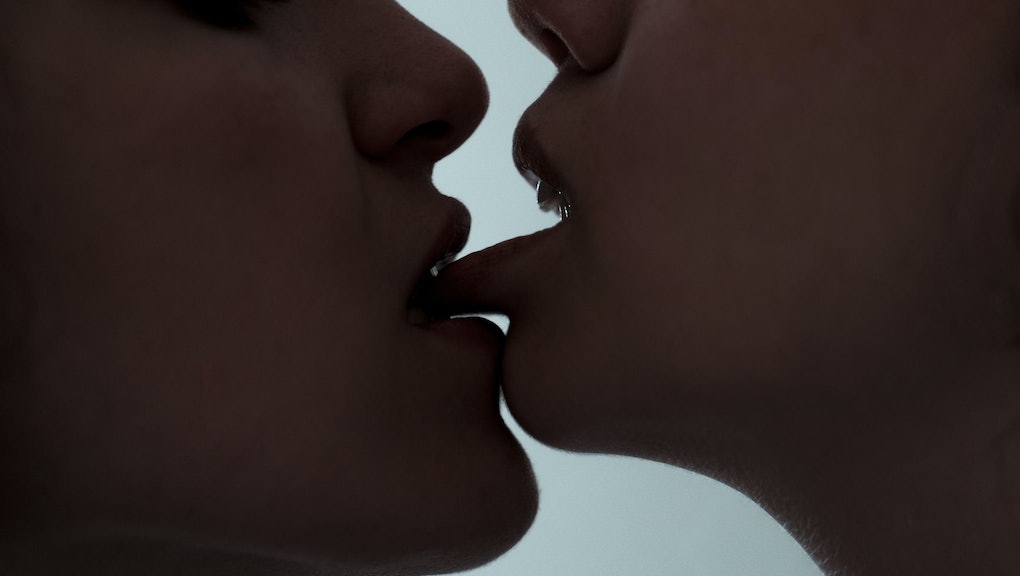 How to talk about kink with a new partner, because it doesn't have to be awkward

“I like to struggle,” I whispered. What I meant was: Hold me down. Instead, she wrapped her arms around me and held me sweetly, nuzzling her face into my neck and petting my arm lightly with her fingertips. Oh, I thought. That’s not what I wanted. We had just been all sweaty and frenzied and now we were cuddling? Was she purposely withholding? Embarrassed? We had only hooked up once before, so I didn’t know her that well. “Are you into that?” I asked — determined to tell her about my kink preferences — but she was already gently snoring.

And then it hit me. She thought I said, “snuggle.”

I laughed to myself. She was a thoughtful lover and was just trying to give me what I asked for. She just wasn't kinky, and I am kind of kinky. For the unfamiliar, that means that I like to do things in bed that some people find unusual. Kinky people call people who find our desires unusual “vanilla.” Although some people say it with shade, vanilla is my favorite flavor and I’m not here to judge anyone.

In any event, kink isn’t actually that unusual. Even though most people don’t consider themselves kinky, studies show that most people have kinky fantasies, even if they don’t actually have kinky sex. Interestingly, kink preferences often break down along party lines. Liberals tend to be drawn to BDSM (bondage, domination or discipline, sadism, and masochism), while conservatives are more likely to be into taboo-breaking activities, like age and incest play. Personally, I like to play with power dynamics. In kink circles, this is called domination and submission and they, along with bondage, are some of the most common practices of kinky folks.

But it wasn't that long ago that I began exploring this facet of my sexuality. It's taken time to learn how to communicate about kink well, and I still have questions — when is it OK to tell people I’m dating about my kinks? And how do I bring it up?

“There’s no one size fits all answer for these things,” says Dulcinea Pitagora, a NYC-based psychologist and sex therapist. “Anytime I hear someone say ‘that’s the rule,’ I immediately discard it. Disclosure is a privacy and a boundary issue. It’s entirely based on someone’s comfort level.”

Amanda Sanflippo, a New Orleans sex educator with an adult sex ed radio show, agrees. “It depends on the person,” she says. “I don’t have a formula.”

But if there aren’t any rules, what’s an aspiring kinkster to do with a new-ish partner when they want to try something that the other person might find strange? First of all, wait until you’re comfortable with someone and have developed a sense of trust. The experts are right in that there’s no formula for this, but you can typically tell if someone is basically trustworthy. While some people say that you should just let your freak flag fly from the very start, there are real risks around putting your private sexual desires out into the public domain, so trust is key.

“If somebody gets outed, they could lose their job, their apartment, or even their children. Discrimination happens in many different ways. There’s a possibility of disclosing that could put you in a dangerous situation,” Pitagora notes. She adds that these are worst case scenarios; if your employers or sex-negative people in your community find out about your “unusual” desires, you might just end up feeling uncomfortable, making someone else uncomfortable, or scaring off a person you want to get to know.

Sanflippo says that if you meet someone on a dating app and who is likely to be just a hookup, it’s OK to be upfront about your kinks. You can do this before you even give them your phone number or real name, so there’s no safety or outing risk. Recently, I was messaging a guy on Tinder and within the first few messages, he asked, “Are you sub?” What he meant was: Am I sexually submissive? It felt safe for him to ask and for me to answer honestly because our flirtation was still anonymous.

So if you’re chatting anonymously with someone and it feels safe to you, don't hesitate to indulge in a little freaky banter. And if you’re already sexting on an app, it’s also OK to say, “I want to tie you up.”

But what if you meet someone IRL? Sanflippo suggests first asking your potential crush what they’re into, instead of just dropping the kink bomb on them. “If I was considering being intimate with someone, I might ask a person if they are into kinks rather than divulging my own,” she says. “I’ll ask them what kind of sex they enjoy. Then you can sense if they’re comfortable.”

This is a great rule of thumb. Wait to talk about sex with someone until it seems like you might want to have sex with them; if you’re already thinking about exchanging fluids, exchanging a few words beforehand can’t hurt.

And if you do plan to have sex soon, instead of making a demand like, “I want you to forcefeed me cake,” you can ask a question like, “What do you like to do in bed?” This is a direct and emotionally friendly way of figuring out whether your hookup might be into the same things as you. It’s also a good way to game out your sexual compatibility and strategize about what sexual activities might be mutually pleasurable in advance.

“The conversation about consent is what’s actually more important,” Pitagora says. “The nitty gritty and specifics aren’t as important.”

Um, yeah. What she said.

“People should embrace saying the obvious,” Pitagora says, especially straight, cisgender men. “Cis-het men are used to being dominant by default. They might think asking for consent is too obvious, but because we can’t know, it’s just not obvious.” In other words, even if you are already pretty sure that someone is saying YES, you need to ask them to say (or scream, if you’re into that) YES out loud so that everyone’s signals line up. Consent can also be a great lead in to talking about your kinks. “Is it OK for me to kiss you?” is just a single word switch away from, “is it OK for me to spank you?"

In the past year, I’ve gotten a lot better about being explicit about what I want. In some ways, I was late to the kink party — I was basically married for half my life to vanilla folks and I never really thought to sexperiment with them. But, actually, I’m not late. Most people become more sexually adventurous as they age, and it can take a lot of trial and error before you get good at saying what you like out loud to new partners.

It’s definitely worth it, though. I’ve had more great sex in the last six months than I did in the first 20 years of my life. So if you’ve got some kinky fantasies, don’t worry, you’re not late, either, it’s just might take you a hot minute to learn how to talk about them.

A few weeks ago I hooked up with my sweet, snuggly friend again. She straddled me and playfully held my hands together over my head. When I resisted, she let go.

“Ohhhhhhh,” she said, smiling. And then she held me down.

This article was originally published on July 1, 2019