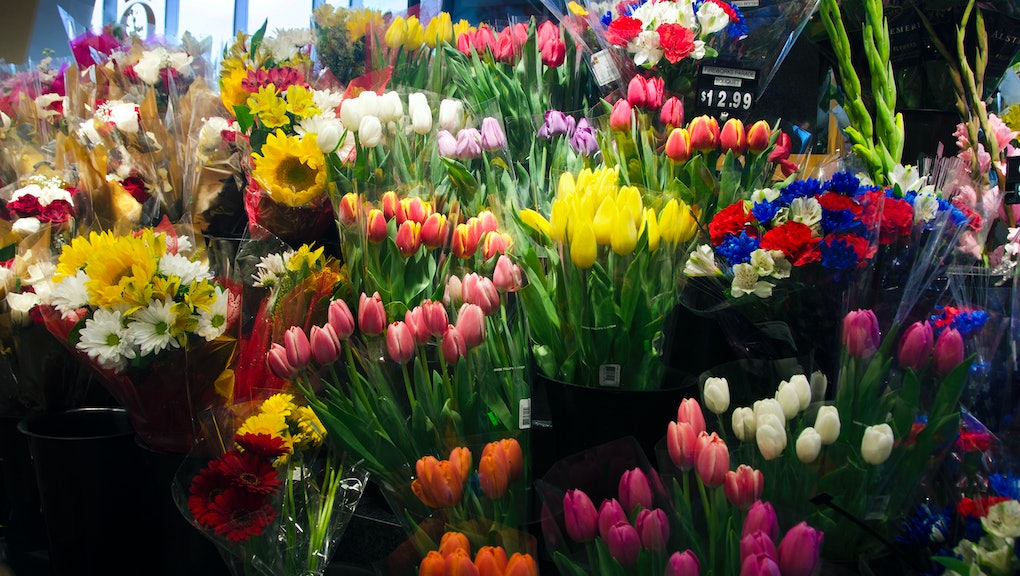 How to transform cheap flowers into a fancy bouquet, according to a florist

This Sunday, countless noses will be ambushed by the scent of roses, peonies, anemones, and all the other Valentine’s Day classics. And of course, many of us will wait until the last damn minute to get something for the object of our affection, and honestly that’s okay. We’re still in a pandemic and you’re not expected to A-game it this year. Grocery store or bodega or flowers will suffice — but that doesn’t mean you have to forego presentation. So, how do you make a bodega bouquet look like you paid Martha Stewart to arrange it for you?

“The first step is to not to choose a vase that's too big,” says Farrah Maxwell, a Brooklyn-based florist who sells bright and lively bouquets out of her shop, Floral Symbiosis. Many times, she tells me, people get a vase way too big, and then they don't have enough flowers to fill it — which just looks broke and sad. To make a bunch of flowers avoid looking like the visual equivalent of a sad trombone, a cylindrical vase is your best bet.

“The second step is try to stick with a color scheme,” Maxwell says, warning us to avoid a chaotically mixed bouquet with random colors, which a lot of cheap grocery stores love to hawk. “I typically like to choose flowers in a specific color [scheme] — different shades of pink, or complementary colors.” Maxwell says that when she approaches an arrangement, she does so with a color in mind. Then, she picks flowers that compliment that on the color wheel. For those who have no idea what that means, here’s a color wheel that’ll help.

The “keep it simple” vibe goes for type of flowers too. “Stick with one to two types,” Maxwell says. “Don't try to get a mixed bouquet because while they sometimes look full, you can tell they’re bodega flowers. Because you don’t want your flowers to look like you bought them along with a pack of Starburst and a Mountain Dew, do the bare minimum: Remove packaging, arrange them, and skip the baby’s breath (this is not the 80s, plus it tends to shrivel and brown quickly, Maxwell tells me). “I like to use his statice flowers,” a type of lavender widely available Maxwell says. “Statice is really colorful and it dries nicely. That could be like a similar alternative to baby's breath.” At the very least, don’t use of branded ribbon or big gulp cup like the truly chilling boyfriends in this New York Post story.

“I've styled bouquets of flowers using spray roses and carnations, and have made it look like a $200 arrangement, and it's really because of the colors,” Maxwell says. She didn't go overboard, which you might be tempted to do if you’re late, flustered, and clueless. “I think that's the rule of thumb: Choose some beautiful freesia, delphinium, some irises, or calla lilies, but only one or two kinds,” she says.

The simple act of giving someone flowers is beautiful, no matter the situation. That is, if you remember to at least take the price tag off those blooms after you buy them at the gas station.

More like this
The best new dating apps for your Hot Vax Summer
By Tracey Anne Duncan
13 unique Mother's Day gifts from BIPOC-, queer-owned, and small business
By Melissa Pandika
Margarita burns: Why lime juice and sunshine don't mix
By Melissa Pandika
Stay up to date