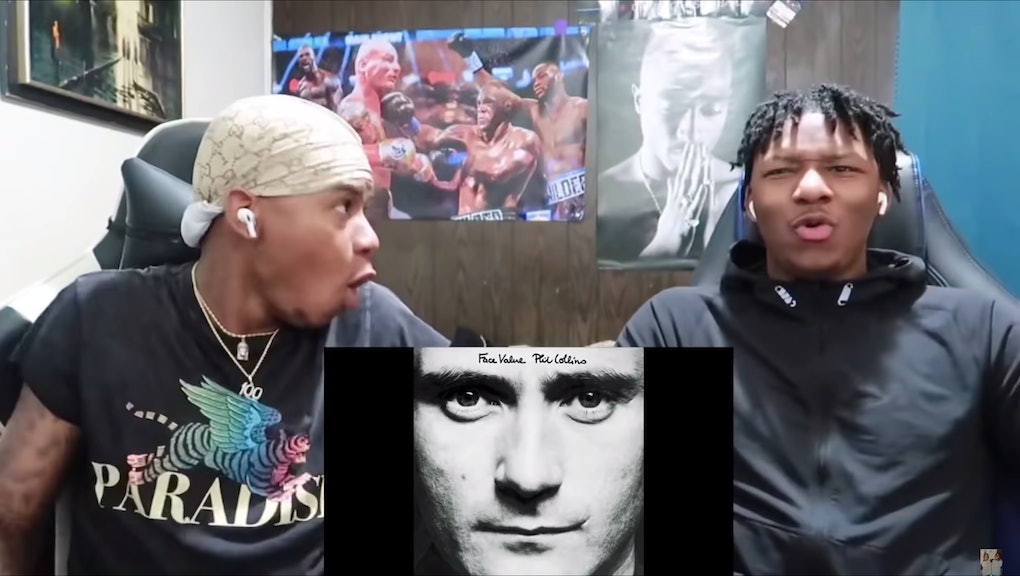 How twin YouTubers took Phil Collins to the top of the charts ... in 2020

Dolly Parton changed the game for Tim and Fred Williams, the 22-year-old twins who’ve gone viral in the last few weeks for their YouTube vlogs of themselves listening to iconic songs for the first time. A month ago, the Williams brothers uploaded a reaction video to “Jolene,” which they’d never heard before, and set the internet ablaze with their genuine enthusiasm for the Smoky Mountain songbird and her iconic pop plea to an auburn-haired, green-eyed beauty not to take her man. “Okay, Dolly!” Tim exclaims when the song ends, throwing his hands in the air. “This was a straight banger.” The video has been viewed more than 3 million times.

The 21-year-old Williams twins have been at it for almost a year, uploading videos of their first time listening to Aerosmith, the Spice Girls, Janis Joplin, Nina Simone, Nirvana, Neil Young, Abba — the list goes on and on. They’ve tapped into something people have evidently sorely needed without even knowing it: a joyful celebration of music history, enabled by the internet, guided by two infectiously enthusiastic hosts, who are undeniably thrilled by their sudden virality.

Two weeks ago, the twins posted another vlog that went even more viral than the “Jolene” reaction video: their first time hearing Phil Collins sing “In The Air Tonight.” The twins seem nonplussed by the song’s instrumentals at first, but the instant Collins croons his first lyric, Tim puts a hand to his chest like he’s clutching his pearls and pauses the song to let the notes sink in. “I didn’t prepare for this!” he cries. “Play that thing,” Fred commands. They jam to the rest of the song, getting progressively into it till the track crescendos into its drum solo and the dudes completely lose it. “Ain’t never seen nobody drop a beat three minutes into a song,” Fred gushes. “Let’s wake ‘em up!” he adds.

There’s a lot to love about Tim and Fred, and their giddy enthusiasm and charismatic showmanship certainly tops the list. The guys are Gen-Z vloggers, remember. Every video starts with a slick intro and the twins imploring you to smash those like and subscribe buttons. The Williams brothers know they’re performing for an audience of millions, and they ham it up accordingly.

One of my favorite things about the twins’ reviews is how spot-on they are most of the time. Hearing the Spice Girls sing “Wannabe,” Tim observes the song is something young girls might sing at a slumber party, while jumping on the bed and having a pillow fight. As a child who had many such sleepovers in the mid-90s, may I say: you nailed it, sir.

There’s also evidence that the Williams twins’s viral videos are having a real-world impact on music sales. “In The Air Tonight” jumped to the top of iTunes, landing at number three on the song sales chart after “WAP” by Cardi B featuring Megan Thee Stallion and “Beers and Sunshine” by Darius Rucker. Before Tim and Fred published their video, the song was in 185th place. Sounds like Phil Collins owes a couple of vloggers some royalties.

The twins clearly don’t love everything they hear. Watching a recent review of Toto’s “Africa,” you can tell their enthusiasm has waned somewhat. It probably doesn’t help that Tim and Fred graduated to watching music videos, since the one for “Africa” is a particularly confounding 1980s colonialist fantasy of the continent made by white guys who’d never been there. I found myself watching Fred to get a read on what he really thought of the track, but while it’s not their most gushing review, the twins maintained a patina of positivity. Personally, I think it’d be fascinating to see them start critiquing tracks that fall short of brilliance or timelessness. The streaming age is marvelous for mining culture of yore, but it’s also a lens into outdated and offensive social attitudes.

Fred and Tim’s ignorance of famous oldies and not-so-oldies illuminates something magical but also confounding about streaming. Linear music discovery still exists in the digital age, of course. An artist drops a new album or track and it reverberates through culture in real time. Try finding a person who doesn’t know Megan Thee Stallion’s “Savage” or who hasn’t formed an opinion about “WAP” already. But if you, like the Williams twins, didn’t live through the 1970s or 80s and never had a reason to seek out Phil Collins or Dolly Parton, there’s a good chance they’re in your musical blindspot. I know millennials who’d never heard Prince till a few years ago, as another example.

Enter the streaming age: where you’ve pretty much got the entirety of music history at your literal fingertips. Yet listening is often an individual, bespoke experience guided by algorithms that nudge you towards playlists drawn from music you already like. It becomes a cultural echo chamber pretty quickly. These days it’s not that weird for a young person not to know songs that slightly older people think are ubiquitous hits. And that’s what’s so enchanting about Fred and Tim’s videos: though the tracks are new to them, the twins infuse songs that are extremely familiar to other people with brand new wonder and reverence.