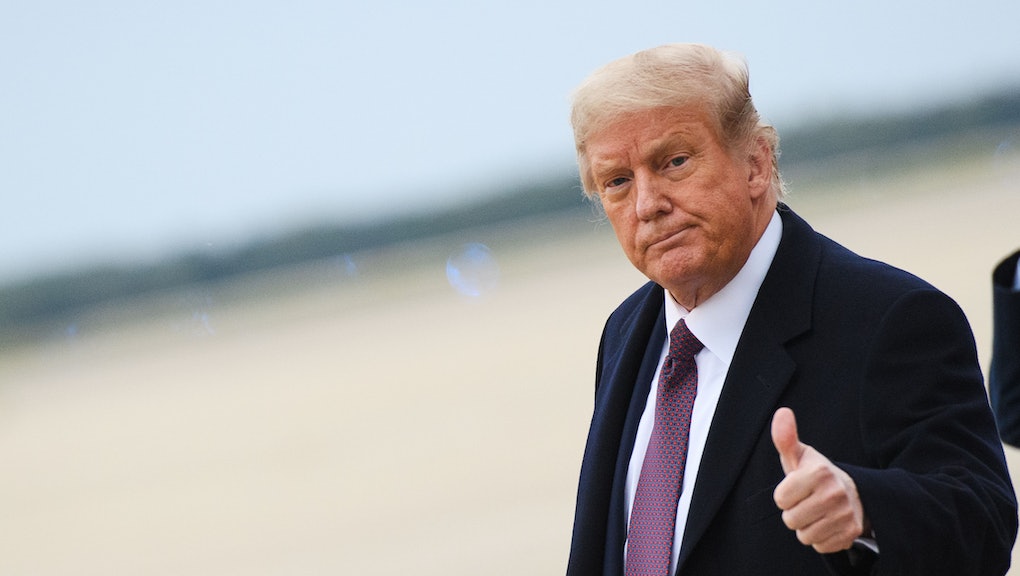 How will Trump's coronavirus diagnosis affect the election?

At 12:54 a.m. ET Friday, America was thrust into strange and uncharted waters with the announcement that President Trump and his wife Melania had tested positive for coronavirus. The pair immediately entered quarantine, just 32 days before Election Day.

To say that nobody has any idea what happens next is a dramatic understatement. Still, the show must somehow go on; we'll wake up tomorrow, and the next day, and the next day, inching ever closer to Nov. 3. But with absolutely no playbook to guide us, what all those tomorrows will actually look like is anyone's guess.

To begin with, it's safe to say that the Trump's diagnosis has thrown a hand grenade in the ongoing presidential election. While the White House hasn't commented on just how long the president plans to actually quarantine for, the Centers for Disease Control and Prevention prescribes 14 days of isolation for people who have simply been in contact with someone who has been infected, to say nothing of the infected person themselves. Assuming the president follows the CDC's guidelines (and if history is any indication, that's a pretty big assumption), that means his ability to campaign will be severely kneecapped — if not halted entirely — for the bulk of the time between now and Election Day. And that's assuming he remains in perfect health, which is no guarantee either, considering he has already begun displaying coronavirus symptoms, though mild ones, and given that he wasn't exactly in perfect health to begin with.

But let's say Trump remains relatively asymptomatic. It seems unlikely the president would hold any of his massive MAGA rallies — ones that have already racked up a fatality count from coronavirus — in the immediate future. That's not to say the Trump campaign wouldn't keep the rallies going with some of the president's children or top aides acting as surrogates, though, which means the un-masked, un-distanced affairs could continue to be a risk even with the president sidelined.

Alternately, it's possible, and perhaps more likely, that the campaign will pivot back to a digital race, leaning heavily on virtual messages and Zoom "rallies" to energize the president's base. Of course, there is also the possibility that the president's diagnosis — and whatever happens next — could derail his campaign entirely.

"It's as if the campaign ended yesterday," one unnamed former West Wing official told Vanity Fair, while another stressed that Trump is "going to want to get out there a lot sooner than people think.”

“But it will be hard to hide if he’s sick," that official added. "Also, who will want to be in a room with him?”

Meanwhile, the Biden team has only recently begun dipping its toes back into large scale in-person campaigning — a move that could prove short-lived if the campaign feels the president's diagnosis merits additional caution on their part. Conversely, the Biden camp could also choose to exploit the president's likely absence from the campaign trail by leaning into even more in-person work. Joe Biden and his wife Jill Biden are expected to be tested for coronavirus Friday after sharing a room with Trump at Tuesday's presidential debate; the former vice president shared well-wishes for the Trumps on Twitter after the news broke.

One open question is whether or not Trump will participate in the second presidential debate, currently scheduled for Oct. 15. The president had already begun to cast doubt on whether he'd appear for another one-on-one with Biden, following his disastrous, militia-endorsing performance at the first debate. His COVID-19 diagnosis could very well give Trump a plausible excuse for skipping round two — perhaps not a significantly loss given how many people argued for canceling the remaining debates anyway, given Tuesday's fiasco.

Still, it's possible that the debate will continue virtually — a possibility buoyed by the fact that the Biden campaign is reportedly furious at the Trump team for potentially exposing them to the virus in the first place during the debate. On Tuesday night, Trump mocked Biden for wearing a mask in public, arguing nonsensically that while he wears a mask "when needed," Biden puts on the "biggest mask I've ever seen" while speaking "200 feet away" from people.

But election aside, the president's diagnosis also throws a significant wrench in his ostensible day job of leading the country. On Friday, a maskless White House Chief of Staff Mark Meadows assured reporters that Trump remained on top of his presidential responsibilities, telling the assembled press corps that "we've talked a number of times this morning. I got the five or six things that he tasked me to do, like I do every single morning. He is certainly wanting to make sure that we stay engaged."

However, there seems to be no unified plan directing White House staffers how to do their jobs in light of Trump's quarantine, with some aides reportedly working from home, while others clock in in-person as usual. Even if the virus's spread is caught and held in check at this point, the disruptions to the everyday business of the administration will almost certainly affect the White House's ability to operate effectively.

Of course, all this assumes that things stay relatively stable for the time being — no significant downturns to the president's health, no additional infections, no unforeseeable black swan catastrophes that might ignite an already explosive situation.

The truth is that we're in frighteningly uncharted territory here. There's no blueprint for what happens next. The one thing we can count on is that the coming weeks are going to look nothing like we thought they would just yesterday.

More like this
Sarah Sanders is here for the vaccine — as long as she can credit Trump for it
By Vanessa Taylor
Trump kept a Gitmo prisoner detained for 5 extra years. Biden has finally freed him
By Rafi Schwartz
Nancy Pelosi took a stand on the Jan. 6 committee, and it left Republicans whiny as hell
By Rafi Schwartz
Stay up to date