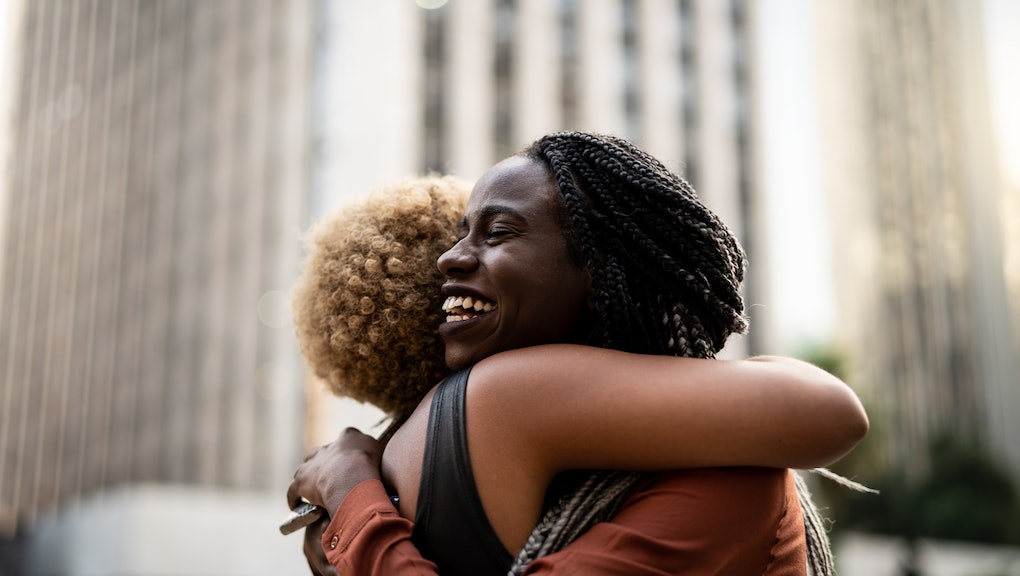 Hugging requires consent, now more than ever. Here’s how to navigate that

When faced with the open arms of a smiling acquaintance saying, “C’mon, get in here,” my first instinct is to run away. Because no, we don't know each other like that and I do not want your dead skin cells to shed onto me, TYSM. However, now that I’ve been sequestered for what feels like the length of time it takes a screaming cicada to reach maturity, I too have changed into something unrecognizable — a hugger. As a person who is invested in not being a creep, though, I wonder how we can non-awkwardly ask people if it’s okay to hug them. I asked psychologists how to navigate requesting consent when you want to embrace someone you’re not already intimate with.

“Some moments of life are just going to be unavoidably awkward,” says Annalise Oatman, a psychotherapist in San Francisco. And there’s something inherently awkward about asking for a hug, she says. “The funny thing about awkwardness is that, in moments of true, excruciating awkwardness, we're typically not just concerned about our own awkward feelings, but also about those of everyone in our vicinity,” Oatman explains. In other words, it may not be possible to avoid feeling uncomfortable, but this feeling is a good sign because it indicates that we really care about the feelings of other people. Yay us.

Oatman suggests that While we may not be able to avoid our own feelings of awkwardness, we may be able to make our hug requests easier for other individuals. Switching your focus away from yourself to the best way to make the moment a little less painful for those around you is the first step in asking for a hug, Oatman says. How you ask for consent, then, depends on who you’re asking. “Read the room,” says Oatman.

If the folx you’re with have given any clear — verbal or nonverbal — indications that they would not be open to a hug with anyone, then don't bother asking, Oatman says. So if, for example, your would-be hug recipient seems to be keeping their physical distance from you or others or has explicitly mentioned feeling uncomfortable about touch, just let your hug aspirations go for now and don’t take it personally. We’re all navigating unfamiliar terrain with rusty social skills right now and their discomfort probably has nothing to do with you.

If your friend is giving you physical signs that they feel comfortable — like leaning in or standing close to you — it may be time to pop the question. That doesn’t mean it won’t feel a little weird, though.“It may be impossible to avoid awkwardness with the question, ‘Would it be alright if I hug you?’ Oatman says, and she recommends taking a more casually playful approach. “You could lead with a question like, ‘Are we doing hugs?’ or simply, ‘hugs okay?’” The casualness of these questions gives the potential hug recipient an easier "out", says Oatman. In other words, they're less likely to feel like they're hurting your feelings or causing awkwardness if their answer is "no.”

Oatman basically advises trying not to overthink a hug or try to make it seem overly important. The playful approach keeps the mood light and protects everyone’s feelings. “The more serious the question feels, the greater the potential for awkwardness on both sides if the response is, ‘no.’” In other words, if you make a big deal out of hugging, it’s going to feel like a big deal, but if you don’t, it probably won’t.

Okay, but what if you’re the person who doesn’t want to hug? Oatman advises a similarly lighthearted drawing of boundaries for folks who don’t want to be hugged. You can simply say, “I’m not into hugging right now,” and offer an elbow bump instead. “Most people are aware of what an elbow bump is at this point in their initiation into COVID-life, and they should be able to reciprocate the elbow bump without skipping a beat,” she says. Rubbing elbows may not feel as satisfying as hugging, but it shows someone that you do like them even if you don’t want to be wrapped in their embrace.

I don’t know who needs me to say this, but your physical boundaries — and those of anyone you come into contact with — are valid and deserve to be respected. And, as with all other kinds of consent, you can offer it or revoke it at any time. You can hug or not hug as you see fit. You can not hug hello and still hug goodbye, and the only rule is: Ask for consent every time. Otherwise, the world is your open (or closed) armed oyster, my friends.

More like this
Can CBN help you sleep? The science behind the trendy weed compound
By Melissa Pandika
Allergic to sunscreen? Here's what to do, according to a dermatologist
By Melissa Pandika
How will our pandemic trauma translate into emotional growth?
By Tracey Anne Duncan
Stay up to date