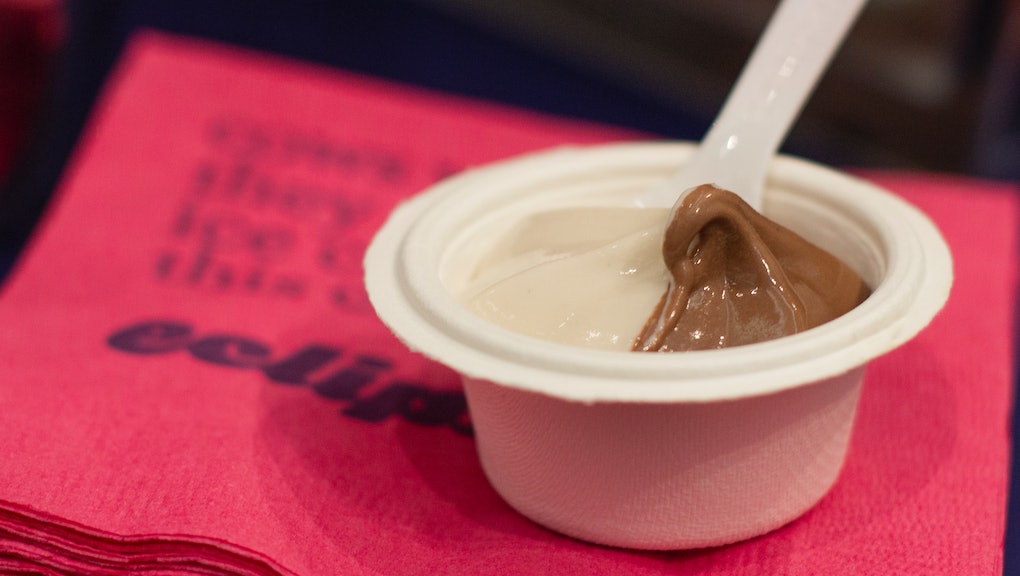 I found a "healthy" ice cream that doesn't suck

The wellness industry has seeped into so many aspects of our lives over the years, it was only a matter of time before it came for ice cream, too. Low-fat, low-calorie Halo Top became North America’s sixth-biggest ice cream brand in 2018, in a matter of only six years, the Financial Times reported. Competitors like Enlightened and Simple Truth have also grown in popularity. I’ve written about these healthy ice creams before. Overall, they taste chalky, and pretty meh.

Plus, they can leave you feeling unsatisfied and lead you to eat more calories than you would’ve if you’d just had a sensible serving of the real thing, Amy Kimberlain, a registered dietitian nutritionist in Miami and media spokesperson for the Academy of Nutrition and Dietetics, told Mic.

Now, a few brands seem to have improved on this earlier iteration of healthy frozen dessert. They’re a bit like sherbet: creamier and more flavorful than, say, Halo Top, but not as rich as full-fat ice cream. Unlike their predecessors, some contain only a handful of ingredients, while others don’t contain sugar alcohols. But nutrition experts note that whether they’re actually healthy still depends on a number of factors, such as who’s eating them, and how much.

When I encountered Sorbatto’s blueberry-based ice cream at the Specialty Food Association’s recent Winter Fancy Food Show in San Francisco, I was skeptical — especially when CEO Jeff Weijohn told me the chocolate variety, Dark Blue, was nearly 90% blueberries. Expecting something bland and obviously healthy-tasting, I was surprised by the robust chocolate flavor, jammy undertones, and velvety mouthfeel. The label listed only six other ingredients: organic cane sugar, organic chocolate liquor, hemp hearts, vanilla extract, sea salt, and water. Besides Dark Blue, Sorbatto makes five other flavors, and sells its pints in choose-your-own packs that start at $44.99 for a four-pack (a gentle reminder that "wellness" comes at a cost).

A few steps away, another vegan ice cream brand, Eclipse Foods, had set out bowls of chocolate-vanilla swirl soft serve. Eclipse’s ice cream is made from common, easily-sourced ingredients, such as corn, oat, potato, and cassava, and it’s free of common allergens, including soy, nuts, and wheat. Unlike Halo Top or Enlightened, it doesn’t contain gums, either.

Eclipse’s soft serve had the same milky flavor and creaminess as full-fat ice cream. I tasted some starchiness, probably from the cassava or potato, which I could’ve done without, although it wasn’t unpleasant. A rep told me that Eclipse is adopting the model Impossible Foods uses for its burgers, selling its liquid base to ice cream shops, which then add their own flavors.

I made my last healthy ice cream pit stop at Re:THINK’s booth. Although its products contain dairy, they’re still low-calorie and low-sugar. The brand also advertises that they don’t add sugar alcohols or artificial sweeteners, only organic agave syrup. I sampled the Coconut Matcha flavor, which had a subtle earthiness from the matcha, and a rich, creamy texture. Re:Think comes in 11 more flavors, including Almond Asteroid and Turmeric Ginger, which you can buy for $6.99 a pint.

But is this new crop of “healthy” ice creams any healthier than their predecessors?

Overall, Angela Zivkovic, an assistant professor of nutrition at UC Davis, sees the emergence of more healthy ice creams as “a good thing,” expanding options for people with lactose intolerance, diabetes, and other dietary needs that prevent them from eating full-fat dairy ice cream.

That said, she doesn’t like the idea of labeling ice cream, or any food for that matter, as “good” or “bad.” “What’s good for one person isn’t good for another person,” she says. A marathoner with an active job could have room for full-fat ice cream in their diet, but that wouldn't likely be the case for someone with diabetes. Basically, there’s no such thing as a universally healthy or unhealthy food.

Plus, you can still overdo it with Sorbatto and the like, even if they contain less fat and a lower concentration of calories than regular ice cream “This stuff is so tasty, so good, that you’ll tend to eat a lot of it, and your calories will go up,” David Levitsky, a professor of nutritional sciences at Cornell University, tells Mic. As with anything, it’s fine to eat it in moderation. When we label it as “good,” though, we tend to think we can eat as much of it as we want, Zivkovic says.

A marathoner with an active job could have room for full-fat ice cream in their diet, but that wouldn't be the case for someone with diabetes.

Some of the newer healthy ice creams don’t contain the alcohols or gums found in Halo Top or Enlightened — but whether that’s actually “better” for you isn’t clear-cut. “I think we’re missing a lot of evidence of whether certain things are really that bad,” Zivkovic says.

Kimberlain, the dietitian, told me for my previous article on healthy creams that sugar alcohols and gums may make you bloated and gassy. On the other hand, if you have prediabetes and a sweet tooth, eating ice cream with sugar alcohols in lieu of sugar might be a good idea. “We don’t have strong evidence to say they’re necessarily bad,” Zivkovic says. Meanwhile, gums can lower the rate at which your stomach empties, Levitsky explains, making you feel full, longer. In other words, these ingredients aren’t unhealthy in every case.

In general, whether this new generation of healthy ice creams will actually benefit your diet all depends on your needs and tendencies. For instance, if you know you’ll struggle to eat them only in moderation, then they might not be such a great idea. Regular ice cream still tastes better, but these products left me less nostalgic for the real thing than Halo Top.

This article was originally published on Feb. 12, 2020

More like this
The benefits of liquid chlorophyll, explained
By Melissa Pandika
The fast food industry's predatory marketing blatantly targets Black and Latinx youth
By Taneasha White
AI created the "ideal" non-dairy milk and the ingredients are pretty bizarre
By Tracey Anne Duncan
Stay up to date