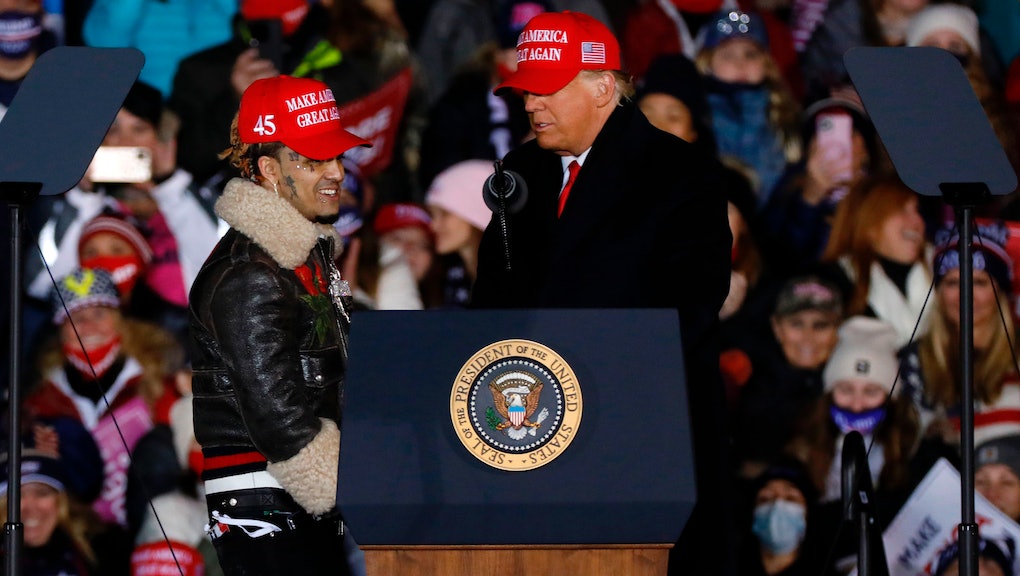 President Trump’s final week of campaigning has been relentlessly petty. He's spent most of the time grousing about celebrities who don’t like him and gravitating toward the few who do. This isn’t much of a break from civilian Trump, who used to live tweet Kristen Stewart segments on Entertainment Tonight, but it’s still amazing that this is all he has left. The 20-year-old rapper Lil Pump has somehow now fallen into this orbit, declaring his support for the president last week and appearing at a rally in Grand Rapids, Michigan, on Monday night. “One of the big superstars of the world — Little Pimp,” Trump said in a botched intro that will undoubtedly boost searches for the 2005 animated film Lil’ Pimp.

Pump, an artist who’s almost singularly cut from the mold of post-2016 Kanye West, is one of the most unserious trolls in music. Just four years ago, before he brushed fame with “Gucci Gang” and claimed to drop out of Harvard, Pump wrote “FUCK DONALD TRUMP” in a now-deleted tweet. It’s not worth making the obvious connection between this mindset and the guy he’s currently supporting, but it’s still impossible to understate how weird it all feels. This is the natural, convoluted endgame of Trumpism — unless it isn't.

The Joe Biden campaign has, stunningly, avoided many of the cringe-filled pop cultural reaches of Hillary Clinton’s campaign. (Yes, Eminem’s PSA on Monday came close, but it’s no Pokémon Go to the polls or chillin’ in Cedar Rapids.) Without casting any predictions, there’s one scenario where the Lil Pump and Lil Wayne endorsements, along with that objectively funny “YMCA” dance supercut, go down as Trump’s equivalent of those blunders — straining for votes that weren’t going to break his way in the first place.

The 24 hours leading up to the election results tend to be hazy, and immediately overshadowed by whatever comes next. Only a truly disturbed individual can store the memory of Hillary Clinton attempting an Election Day Mannequin Challenge with Jon Bon Jovi for more than a few days. If everything shakes out the way most polling services project — for real this time, they promise — President Donald Trump’s camaraderie with Little Pimp, née Lil Pump will be extremely funny in retrospect. Otherwise...man, it’ll just feel bad all over again.