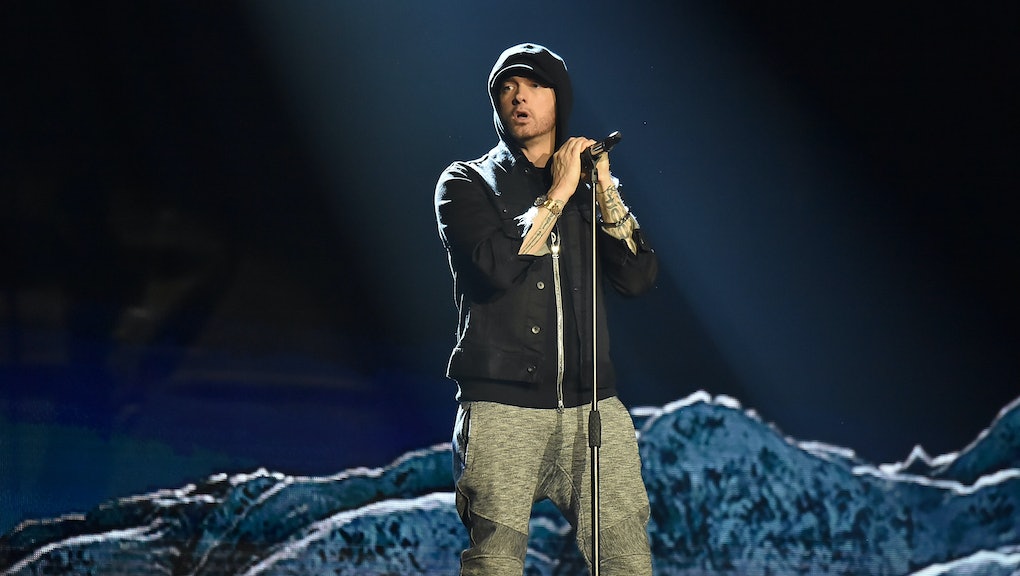 Eminem rarely licenses "Lose Yourself," but he made an exception for Joe Biden

Do you remember when 48-year-old rapper Marshall Mathers, a.k.a. Eminem, inexplicably appeared at the 2020 Oscars to perform his hit 2002 song, “Lose Yourself?” Sure it’s a vintage banger, but even the celebrities in the audience were visibly confused. Well, Eminem just deployed “Lose Yourself” in a political ad for Joe Biden, inserting the track into our cultural consciousness for the second time this year. That’s a big deal, because Eminem almost never licenses his music. And curiously, it makes him one of the only high-profile rappers to publicly endorse Biden for president.

The last-minute Get Out The Vote ad is 45-seconds long and was funded by the Biden campaign. It’s titled “One Opportunity” and features black-and-white footage of the American landscape, including on-location shots of Detroit and film from a recent visit by the Biden team to the Michigan State Fairgrounds. The directive “VOTE” is watermarked over the striking imagery and emphasized by Eminem’s lyrics: “You only get one shot, do not miss your chance… This opportunity comes once in a lifetime.” Message received, guys.

Listen, everyone from Beyoncé to Billie Eilish are on their megaphones right now pleading with fans to cast their ballots. But Eminem allowing Biden to soundtrack a last-ditch ad to “Lose Yourself” is a pretty clear indicator of how anxious celebrities are about removing the 45th president from office.

Eminem has historically been one of the most licensing-averse artists out there, turning down countless lucrative film, TV, and advertising deals for the use of his tracks. One exception was when he allowed Chrysler to use “Lose Yourself” in its 2011 “Imported from Detroit” campaign that ran during the Super Bowl. Electing Biden to office appears to be a worthy cause in Eminem’s book.

Famously, everyone from the Rolling Stones and Neil Young to Rihanna have protested Trump’s use of their songs in his campaign efforts — many have even sent cease-and-desist orders. On the flip side, a handful of rappers have been making headlines lately for actually endorsing Trump. Lil Wayne, Ice Cube, and 50 Cent all drew ire recently for helping the president theoretically reach Black voters. (50 Cent walked back his endorsement after getting chastised by his ex, Chelsea Handler.)

Somehow, Eminem is the first major rapper to back Biden. But he brought out the big guns, so to speak, by bestowing his biggest hit on the Democratic hopeful. It remains to be seen whether the ear worm drives people to the polls on Tuesday, but one thing’s for sure: Eminem took his “one shot” to push Biden over the finish line.