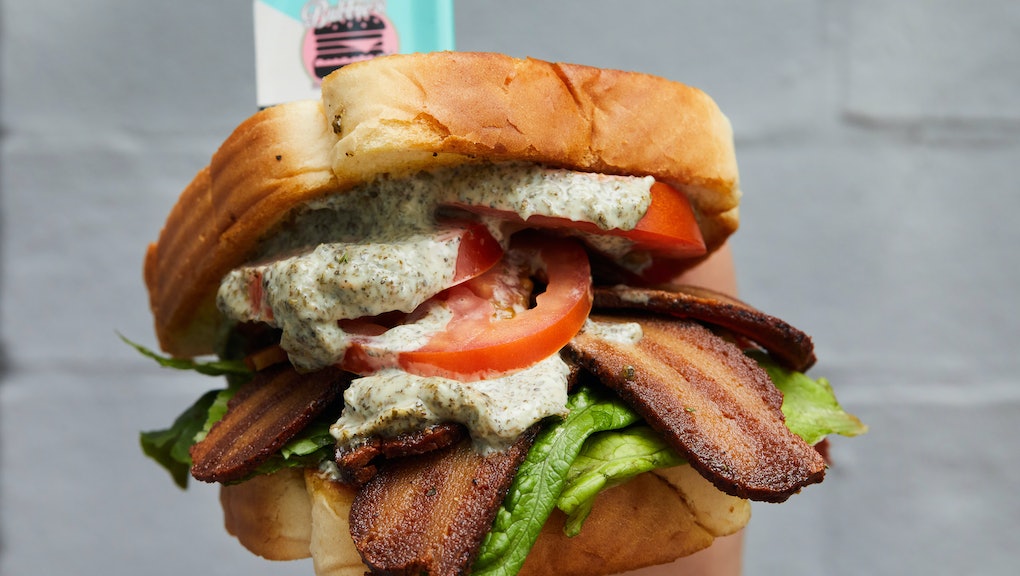 If we get vegan bacon right, we can save humanity

Here’s the truth: Vegan bacon has historically sucked. Most of the packaged varieties look and taste like salty cardboard, and while home made tempeh bacon is legitimately delicious, it has no semblance to real bacon. There has just never been a bacon equivalent to Impossible Burger, and for a long time, it seemed like there would never be anything even close. These new vegan bacon, however, that are blowing up the internet may be a real gamechanger.

No one has ever been particularly hopeful about plant-based bacon, for reasons I feel no need to expound upon, When asked about vegan bacon last year at a press conference, Pat Green, the CEO of Impossible Burger, basically told reporters that the company is trying, but that the Impossible Burger would not release a bacon product until they feel like, “anyone who is the most hardcore bacon worshiper thinks it's awesomely delicious.” Since then, it’s been crickets from the major faux meat makers, which is kind of depressing. If the companies that made bleeding plant-based meat our new normal can’t make vegan bacon palatable, who can?

Lucky for us, the plant-based eating masses are an ingenious bunch. Tabitha Brown, chef and chipper TikTok food influencer, apparently got tired of waiting for the big companies to do their damn jobs, so she stepped in and invented her own vegan bacon. And the internet — which already really digs her plant-based vibes and unimpeachable seasoning game — rejoiced. Within a few days, Brown’s TikTok tutorial on how to make bacon out of carrots went viral, and a little over a year later, it has almost 4 million views.

Since that particular TikTok dropped, Brown has been invited on Ellen to show the world her faux bacon, and celebs like Tiffany Haddish have gone to Brown to learn how to make it. Sadly, though, you don’t really get to make it, because the seasoning Brown developed to “baconize” basically anything, McCormick’s Sunshine All Purpose Seasoning, is totally sold out right now. The only way you can get it is on eBay, where it’s selling at over $100 for a two pack.

So, yes, vegan bacon is definitely #trending, and it also seems to be lucrative. Atlast Food Co, a startup that is making bacon out of mycelium, the underground root structure of mushrooms, recently got $40 million in funding after they won an international alternative meat competition, reported Bloomberg. And consumers, apparently, are buying up faux bacon. According to Nielsen, a market research company, while pork-based bacon still makes up 99% of the bacon market, the amount of money spent on alternative bacon almost doubled, to $237 million, in 2020.

Other startups are also trying to make fake bacon happen. Trophic, a small company out of Berkeley, is working on a bacon alternative made out of red seaweed, a product that is meant to be actually nutritious, unlike so many faux meats. Red seaweed, apparently, is rich in amino acids and B12. And Hooray Foods’ plant-based bacon promises a low carbon footprint and also the classic sizzle of pig-based bacon. Reviewers describe it as, “very bacon-y.” Plus, you can buy Hooray’s bacon at your favorite overpriced corporate eco-grocer, which means it’s definitely catching on.

Look, I’m not so naive as to believe that eating plants alone will save this crazy world, but I do feel like if we can get our basic need for food met without hurting other living beings or the planet, that’s a step in the right direction. As someone who’s been an ethical vegetarian for most of my life, watching the internet explode over vegan bacon feels heartening. If we can get plant-based bacon right, maybe there is hope for humanity.

More like this
This white woman called herself the Queen of Congee for “improving” a 3,000-year-old Asian staple
By Joseph Lamour
Steak-umm, the social justice warrior no one asked for, tweets fire once again
By Joseph Lamour
Sex workers deserve to eat well. And Meals4Heels delivers
By Lovely Brown
Stay up to date