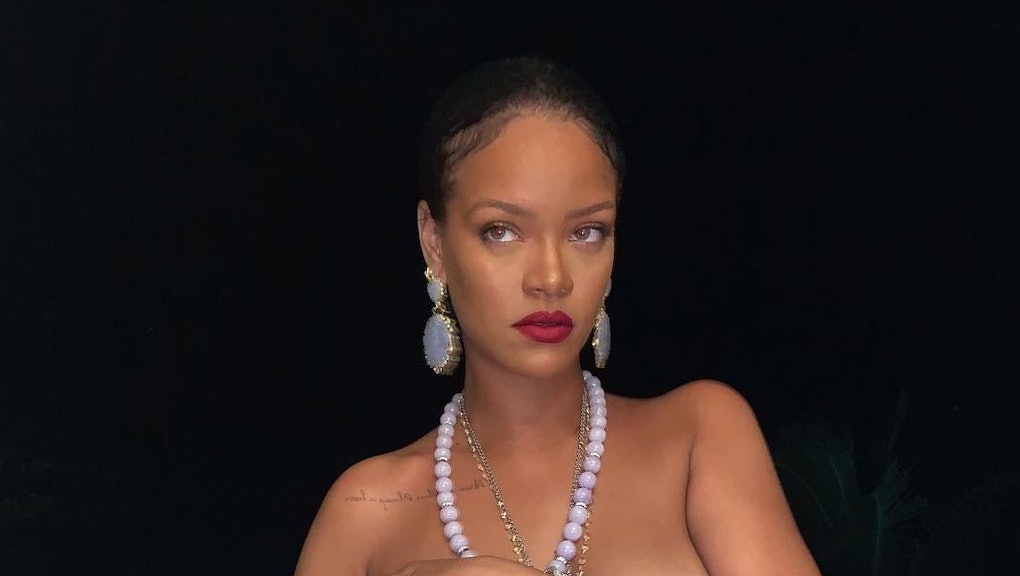 If you're mad about Rihanna's necklace, you're missing the whole point

Last night, Rihanna posted a very Rihanna pic of herself on her IG. In it, she’s confident, sexy, bejeweled, and red-lipped in Fenty boxers and not much else. If you look real close (and a lot of people have), she’s also rocking a necklace with the likeness of Ganesha, the Hindu deity with the elephant head. And of course, people the world over are up in arms about her “blatant disrespect for Hinduism,” and cultural appropriation, etc.

Let me tell you something, Internet: It is my life’s work to call out disrespectful, exploitative fuckery. And this is not it. I’ve been reading tweets and comments — many of them from pearl-clutching Indian and Indian American people upset about Rihanna posing topless with an Hindu-inspired accessory — and felt compelled to spend my morning explaining why this is actually not a huge affront to our people.

Some of the comments are rather baseless, while others touch on important concepts but still miss the point about cultural appropriation. Here’s one that’s been circulated widely on news sites — it reflects about half the pissed commenters’ sentiment: “You're wearing a deity necklace and a Murthi [symbol] of my culture that's already been culturally appropriated enough in the past few years. How is this okay when a person has more than enough resources to at least find out the meaning and significance of the chains and pendant around their neck?”

One crucial thing to keep in mind when fighting the good fight is that the most damaging examples of cultural appropriation happen when a dominant culture steals, profits from, or adopts a marginalized community’s culture as their own. This is not that.

To all my people infuriated about Rihanna wearing a necklace of a Hindu god: We have bigger, whiter fish to fry — one of them being larger-than-life systems of appropriation. Many of the brown people mad about Rihanna’s necklace spend hoards of money on yoga classes and accessories that solely profit the white-dominated American yoga industry. Yoga, by the way, was brought to America by a white woman. Yet by the looks of it, we’re pretty okay with this type of appropriation.

It’s presumptuous to assume that Rihanna doesn’t know the significance of the pendant, which seems to be a part of the commenters’ beef as well. I find this assumption quite hard to believe since there is a Hindu community where she grew up in Barbados (a smaller one than in other West Indian countries such as Guyana or Trindad, but still).

And to those who are claiming that by wearing this necklace topless, Rih is “sexualizing people's religion for clout,” let’s set the record straight. I was raised Hindu so I can tell you from an informed place that Hinduism has long been sexual. Lest you forget who brought you the Kama Sutra. In some scriptures, nudity is actually seen as a gesture of purity, devoid of attachment to the body. Also, my very favorite goddess, Kali, is known (ironically) to be topless, adorned with some necklaces.

Conversely, the Indian culture tethered to this religion is deeply conservative. Sex is a taboo, which is partially why sexual assault is such a huge problem in India. But we won’t go there right now.

Yes, women’s bodies are a complicated concept for the Indian diaspora, as they’re both revered and despised. Yes, Rihanna is a non-Indian non-goddess (technically, at least). Therefore, I can absolutely understand people’s discomfort with her placing a religious symbol in a sensual image. But she is not sexualizing our religion by wearing a Ganesha necklace around her neck. What is offensive, in Hinduism, is when holy symbols touch the ground, so if she were to wear a Ganesha anklet on her foot, I’d have words. And to get back to appropriation: If she was profiting off of a product with Ganesha’s likeness on it, I’d also have words.

One more elephant (god) in the room: Certain passionate Rihanna critics on social media appear to already have a chip on their shoulders about her tweet raising awareness about protesting farmers. As CNN points out, some have linked her newfound penchant for Hindu deities to her stance on the protests.

Really, your reaction to this possibility depends on where you stand on human rights. If her necklace is some coded message implying her support of Indian farmers’ rights, I’m good with that.

“It is no surprise that this intense criticism comes after her tweet about the farmers' protests — a tweet where she did not even take a stance or position,” says Rajan Gill, an Indian American farmer, activist, and professor of history at Yuba College in California. “Rihanna is also the target of conspiracy theories, as many Hindu Nationalists believe that she is being paid by George Soros to sew discord in the country and that her post is just further evidence of that.”

It would almost be funny, Gill says, but India’s jailing of journalists and activists sucks any of the ironic humor right out of all this. “The criticisms Rihanna has faced feel less like a legitimate conversation and more of a way to silence ‘outsiders,’” he adds.

I know Rihanna is not perfect and I also know that it can feel hurtful when something so deeply meaningful — like a symbol of your religion or culture — seems casually thrown into the mix as a fashion accessory. I honor all of your feelings, and there’s room for them in this safe space. But if you’re upset about the theft of our culture and the exploitation of our religion, Rihanna is not the emblem of oppression we should be attacking.

I’m happy to coach you through your rage, but I won’t support unjustifiably misdirecting it at a Black woman who, just last week, advocated for one of the most vulnerable demographics in India. I can confidently bet that she’s not out to hurt brown people. Instead, redirect your rage at the systems of white supremacy that have pillaged our culture for centuries. Let’s mobilize to dismantle them and spread awareness about the mechanisms that continue to damage us — colorism, anti-Blackness, and homophobia, to name a few.

In other words, let’s leave Rihanna be and instead, put in that work (work work work) where it’s really needed.

More like this
The push to legalize psychedelics has ignored Indigenous communities
By Suzannah Weiss
A male actor dubbed Laverne Cox's voice in the Italian version of 'Promising Young Woman’
By Kara Weisenstein
What are neopronouns and how do they honor identity?
By Tracey Anne Duncan
Stay up to date