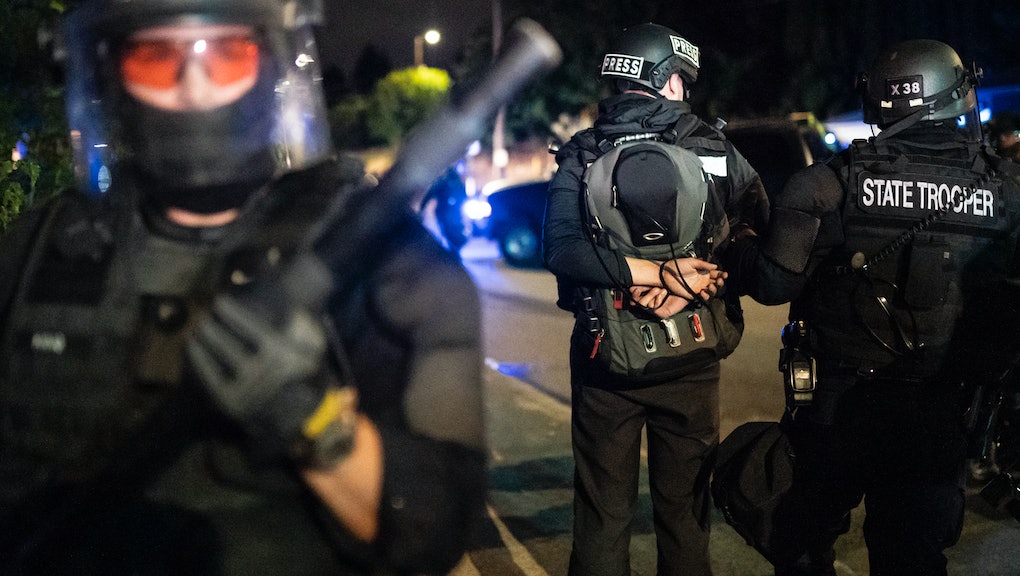 In Portland, violence escalated between Trump supporters and protesters

For over 90 days, Portland has been home to a series of protests in support of the ongoing movement for Black lives. As a result, the city has seen a number of law enforcement and officials trying to quell protests, including mysterious federal agents. But following a Saturday shooting, Oregon's governor is bringing the state police back to Portland.

A man was fatally shot in Portland on Saturday night, amid confrontations between President Trump supporters and protesters in the city. Per CNN, a "Trump 2020 Cruise Rally In Portland" had started earlier in nearby Clackamas, Oregon, before eventually making its way to the downtown Portland area. The man was identified by The Oregonian as Aaron Danielson, though a friend referred to him as Jay Bishop, apparently an alias he used to "avoid BLM/antifa."

Following the shooting, Oregon Gov. Kate Brown (D) released a "Unified Law Enforcement Plan." As part of Brown's plan, Oregon State Police will be deployed into Portland. In addition, Brown's office requested assistance from nearby police departments and the sheriff's office. While Brown says her plan will "protect free speech" and "end violence in Portland," it's unclear how the presence of additional law enforcement at protests against policing will do so.

To start, protests about police brutality have been met with a wave of violence since uprisings began earlier this summer. In Portland specifically, a U.S. marshal shot 26-year-old Donovan La Bella in the head with an impact round and federal agents reportedly tossed protesters into unmarked vans in what's been a continually violent response to protests. Brown's plan has invited the perpetrators of violence into Portland to face off directly against those who contest them.

At the same time that Brown invites state police into Portland, she has also released a statement condemning Trump's role in increased violence. Brown said, "For the last several years, and escalating in recent months, President Trump has encouraged division and stoked violence. It happened in Charlottesville. It happened in Kenosha. And now, unfortunately, it is happening in Portland, Oregon."

Brown went on to add:

“But despite the president’s jeers and tweets, this is a matter of life and death. Whether it’s his completely incompetent response to the pandemic, where nearly 200,000 have died, or his outright encouragement of violence in our streets: it should be clear to everyone by now that no one is truly safe with Donald Trump as president."

Brown is not the only one who has strong words about Trump. On Sunday, the House Intelligence Committee Chairman Adam Schiff (D-Calif.) said that Trump is "willfully fanning the flames" of violence between protesters and his supporters. He added, “The president is only motivated by one thing: what is in it for him. He sees this violence and his ability to agitate more of it as useful to this campaign. What it does to the country, the loss of life, he doesn’t care."

It's unclear if Portland's weekend shooting had anything to do with confrontations between Trump supporters and protesters. However, The New York Times reported that the man was wearing a hat with an insignia for Patriot Prayer, which is a far-right organization. Either way, that's the narrative Trump himself is running with.

Time and time again, Trump has invoked anti-fascists (antifa) and anarchists to delegitimize ongoing struggles. In July, he even referred to protesters in Portland and Seattle as "sick and deranged anarchists and agitators." Once again, Trump has latched onto the narrative of antifa as being uniquely responsible for civil unrest in the United States. On Twitter, Amy Kremer, co-founder of Women for Trump, accused antifa of being responsible for Bishop's death. Trump quote-tweeted Kremer with, "Rest In Peace."

More like this
Ohio police have "run amok" in their dealings with protesters, a federal judge admitted
By Vanessa Taylor
In his first address to Congress, Biden took on the country's vices: guns and police brutality
By Rafi Schwartz
All 4 officers involved in George Floyd's death will face federal charges
By AJ Dellinger
Stay up to date