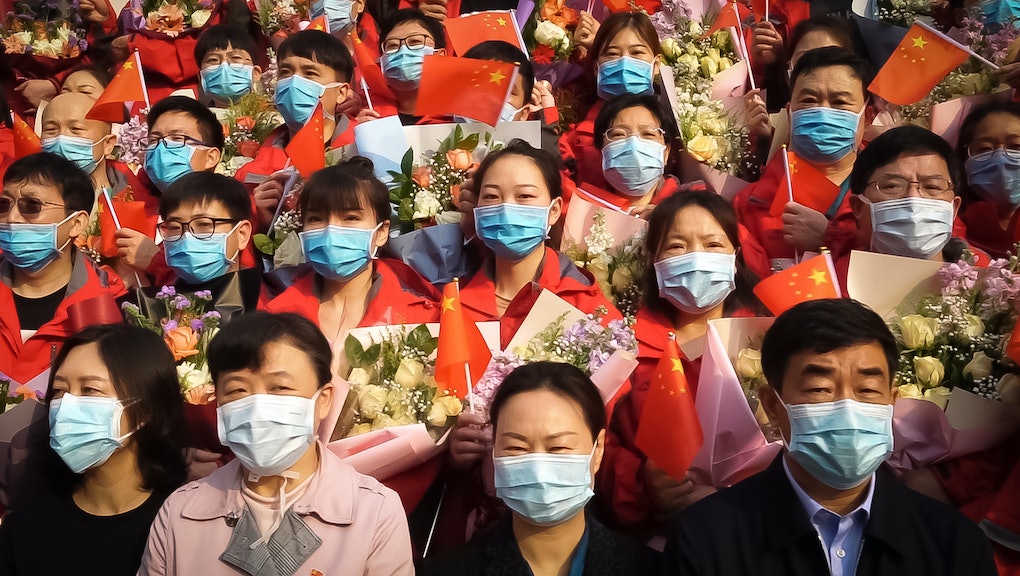 'In The Same Breath' | Courtesy of HBO

Think of filmmaker Nanfu Wang’s new documentary, In the Same Breath, as another resource for understanding how the COVID-19 pandemic was allowed to rage out of control from China’s first received cases in 2019 to now. Don’t let it be your only resource, though. That would defeat the purpose of the exercise and clang against Wang’s intention. “Watch another documentary,” Wang suggests in a conversation with Mic. “Watch two more! Read a book. Go read more reports.” For Wang, there is no such thing as too much information on a circumstance as knotty as the pandemic, especially given the amount of misinformation that’s been floating out there since the beginning.

Most of us remember where we were when the first stay-at-home orders and advisories were issued here in the U.S. Wang was on a flight back to America from her hometown, which is just 200 miles outside of Wuhan, the pandemic’s ground zero. Wang returns to China annually to celebrate Chinese New Year; in January 2020, she left early to head to the Sundance Film Festival, and her husband and their 3-year-old son stayed behind. On January 23, China shut Wuhan down, and Wang scrambled to get both of them back Stateside. For everyone, the pandemic has been personal. For Wang, it’s an intersection of the personal with the political. As a result In the Same Breath is less about the virus itself than how the Chinese government downplayed its severity.

“That’s what I wanted to be clear,” says Wang, “that it's really not about COVID, and during this time, as I am showing this, that it could have happened at any time. It could be about an earthquake disaster. It could be about a fire, anything that the government doesn’t want the people to see the truth.” The earthquake example recalls May 0f 2008, when a 7.9 magnitude tectonic event near the Chinese city of Dujiangyan left around 90,000 people either missing or dead, including 5,300 children, injured 375,000 people, and incurred about $86 billion in damage.

Reporting in China focused on positivity and unity before turning to accusations of corruption against the officials responsible for the construction of the area’s schools, and criticism of the government’s response to the tragedy; questions about either were forbidden by China’s Propaganda Department. The incident buttresses the overarching point In the Same Breath makes about the Chinese government’s history of suppressing truth: If it wasn’t the COVID-19 outbreak, Wang could have directed a film about another national embarrassment deemphasized by the country’s media arm.

In the Same Breath is a documentary about contrasts. Most obvious is the contrast between footage from China’s state-sponsored media and footage that Wang obtained from citizens and in hospitals from around the country. State-sponsored media claimed that nothing was wrong, a real-life version of the “this is fine” meme. Wang’s collaborators’ work showed the opposite, that in fact nothing was fine: people were dying in hospital beds, assuming that the hospitals even had beds because they were so overrun with patients.

This leads to the movie’s second major contrast, between the COVID-19 pandemic and the misinformation pandemic. For Wang, the latter is the real force behind the outbreak. “If there weren’t misinformation, if there were transparency from the very beginning, from everywhere, then it wouldn't have ended up becoming a pandemic,” she points out. “It was political, then it was a pandemic.” Had the Chinese government dealt with COVID-19 the right way from the start — if they had relayed the truth of the virus to Chinese citizens — and if other governments across the world, from the United States to Australia, had done the same, and pushed for safety measures instead of waging culture wars over masks and vaccines, then life would look pretty different right now.

“It happened the way it did because of the mistakes our leaders, our governments, our authorities, made,” Wang adds. “It was not a natural disaster.”

Watching Wang’s camerapersons capture what really went on in China at the beginning of the outbreak gives audiences a lesson in how the political becomes personal. A couple members of her crew agreed to participate and shoot footage on her behalf solely for money, apathetic to how their government was handling the situation. Over time, they came to take interest in the government’s approach to informing people about the coronavirus’ spread, and started thinking critically about its failures. In other words, they gained clarity, Wang’s keyword for In the Same Breath. “I certainly feel not everyone sees it with clarity,” she explains, “because I think it is a very confused year with lots of issues, lots of problems, and a lot of confusing statements and news from the government, too.”

She’s speaking to confusion on a national and global level. Many countries suffer from the same misinformation pandemic as China, and those countries each try to blame the others for mishandling their responses. “There is no clarity in seeing what the problems are and how we got here,” says Wang. Clarity is essential for countering misinformation, but she’s cautious about comparing clarity to medicine. Knowledge itself isn’t going to end the pandemic in the way that antibiotics cure infections. It will, however, teach people how to think clearly. “I do hope by seeing those issues, by examining those actions, and that by having clarity, it would develop critical consciousness,” Wang says, “that it would help us to know there is a way, whether it's directly or in a way that's more conscious, to hold power accountable.”

To fight misinformation, propaganda, and censorship, we have to be able to identify it. But when there’s so much of all three of these floating around, achieving the necessary clarity proves difficult. “I thought about that all the time when I was making this film,” Wang admits. “When everybody believes that they are the holder of the truth, how do you make everyone see what is real and what is not?” Everyone thinks they can tell the difference between truth and fiction, but it’s surprisingly hard. What Wang proposes is startlingly simple: Read. Read more books, read more articles, maybe watch a few more documentary films. The more resources people turn to, the closer they’ll get to clarity, “rather than just a grasp on whatever comes your way and believe is the truth,” as Wang puts it. Verify and question.

In the Same Breath ends on a hopeful note, a bit of wish fulfillment worth indulging as the pandemic continues on the back of anti-vaccine and anti-mask zealotry on social and political levels. “It’s hard for me to picture how all of this might end,” Wang narrates in voiceover. “But I can clearly imagine how this could have begun differently.” The movie rewinds and cues a montage of empty streets paired with dramatized news reports about the novel coronavirus, urging people to avoid travel and wear masks; China collaborates with other nations across the planet, sharing information instead of burying it, and this worldwide nightmare never comes to fruition. It’s a nice dream.

But Wang says she’s more pessimistic than ever. Let the governments spin yarns about hope, optimism, and victory. Wang advocates diagnosis. “We have all the symptoms that we've seen over the past year,” she says. “Whether you're talking about the mask, the vaccine or death, all of those I think are the symptoms of our society.” Diagnosis lets us understand the problems that drive the symptoms. “We can make meaningful changes from there,” Wang says. That’s how we make change — and that’s how we avoid history repeating itself.

More like this
Could fresh air be the key to ending the pandemic?
By Melissa Pandika
After shutting up for a minute, celebrities want everyone to listen to them again
By Brandon Yu
The moral of Nicki Minaj and the Tale of the Giant Balls? We need to explain vaccines better
By Kara Weisenstein
Stay up to date