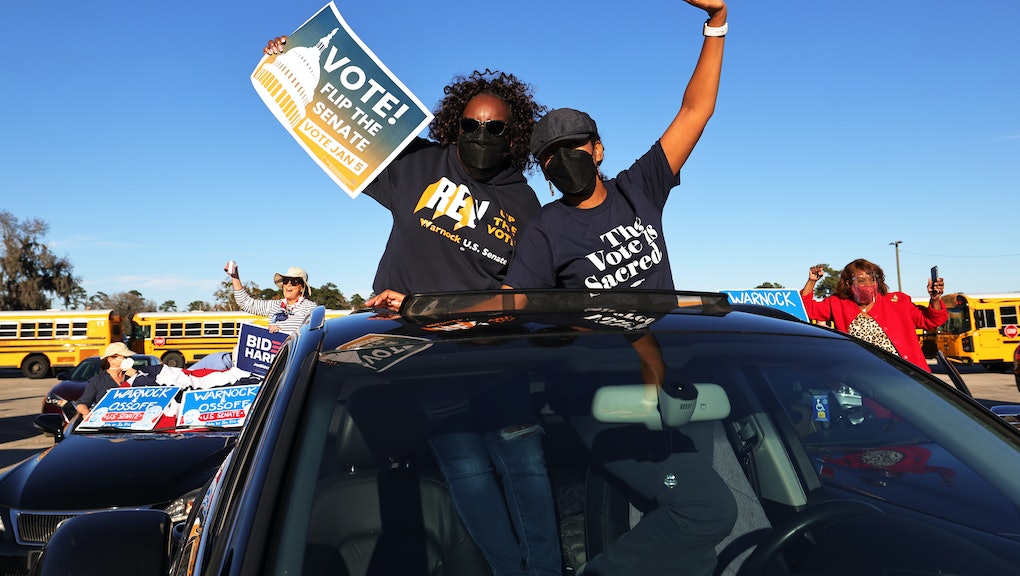 Inside the New Georgia Project, the Stacey Abrams org that's trying to register every POC in the state

Political victories are rarely, if ever, about the candidates themselves. A network of political machinery, grassroots organizations, and behind-the-scenes leaders are the ones who propel candidates to fame — and then maybe even to victory — even if they usually go unnoticed. This trend is on full display in Georgia's Senate runoff elections, which are being held Tuesday and will determine the balance of power in the upper chamber. One of the organizations at the forefront of the elections — the New Georgia Project — was founded by a familiar face in Stacey Abrams.

Senate control isn't the only thing that might change as a result of Tuesday's two races. It seems that in a matter of two months, the political world's understanding of Georgia has shifted — from thinking of the state as a solidly Republican holdout, where turning out Democratic voters just isn't worth the money, to approaching Georgia as a solidly purple powerbroker in D.C. And while the recognition of Georgia's political power (borne out of President-elect Joe Biden's victory in the state), is new, organizers and grassroots organizations have been laying the groundwork in the Peach State for years.

The New Georgia Project has been credited with massive efforts to register and engage voters, alongside some other organizations working in the state, including Abrams's own Fair Fight. But the New Georgia Project's goal isn't just to turn voters out on Tuesday, but to, as its name suggests, build a whole new Georgia. As the organization says on its website, it wants "to register all eligible, unregistered citizens of color in Georgia by the end of the decade." Here's what to know about one of the key organizations on the ground in the Peach State.

From health care to voter rolls

"Young voters, Black, brown voters, and gold voters are Georgia's future and they are voting for a vision many of our current leaders do not want to acknowledge."

The New Georgia Project soon morphed into a voter registration effort, though, helping to enfranchise more than 100,000 voters in just a year's time. By registering new voters in Georgia, a state long thought of as majority Republican, the organization proved that engagement wasn't a matter of interest, but rather of systemic and long-standing disenfranchisement. The legacy of voter suppression efforts by racist pro-segregation state leaders has impacted every election in Georgia, and the numbers speak for themselves: In 2015, 900,000 of the 1.5 million unregistered eligible voters were non-white. As The Washington Post pointed out, in 2016, 22% of eligible voters in Georgia were not registered to cast a ballot. That number fell to 2% in 2020. (Abrams's history-making candidacy for governor was in 2018.)

There's also been a systemic lack of investment by the Democratic Party in southern states, as well as within organizations run by people of color serving people of color, leaving an organizing gap that the New Georgia Project and others have filled. As New Georgia Project CEO Nsé Ufot wrote in an op-ed published Sunday in The Atlanta Voice of the increased turnout for the runoffs: "These changes didn’t happen overnight. Our communities have been organizing across Georgia for years to ensure every eligible voter can cast a ballot, every vote is counted, and results are protected. Young voters, Black, brown voters, and gold voters are Georgia's future and they are voting for a vision many of our current leaders do not want to acknowledge."

In the last decade, the demographics of Georgia have changed in a number of ways. The number of younger voters has swelled, and the number of voters who are not white has also increased — but these are voters often left behind by political parties, and by the Democratic Party specifically. Enter the New Georgia Project. According to the organization's website, these young voters of color comprise 62% of the number of eligible voters in state, but only 53% of them are registered to vote.

Speaking to Mic in February of 2018, Ufot warned against treating Black voters as an "afterthought," saying that doing so would "squander" an opportunity to harness political power. Later that year, Abrams would lose the election for governor to Republican Brian Kemp, who was then serving as Georgia's secretary of state — meaning he oversaw his own election, and purged thousands of names from the state voter rolls during that race.

The aftermath of 2018 was the launchpad for increased investment in young Georgia voters of color, and specifically Black Georgia voters. Per The Washington Post, the efforts paid off for Democrats: Biden won Black voters in Georgia by 77 points over President Trump, and voters ages 18 to 29 by 13 points.

If both Democratic candidates for Senate, Rev. Raphael Warnock and Jon Ossoff, win their elections, it will prove that organizing is a legitimate tool to victory. Grassroots work reaches voters where they're at and sustains that political engagement; it differs from, say, fundraising and courting big-dollar donors and lobbyists in that way. Just look at the New Georgia Project's numbers ahead of Tuesday's runoffs: more than 1,300 volunteers engaged, nearly 2 million doors knocked, and over 6,500 voters registered, according to a press release.

"While the country has only recently begun paying attention to Georgia, to the South, and to our communities, the New Georgia Project has been proudly doing the work, tilling the soil, and preparing for this exact moment," said Francys Johnson, the board chair of the New Georgia Project, in a press release. "We've been reaching Georgians in their homes and in the streets, finding creative and innovative ways to safely engage voters in the issues that matter most to them — COVID relief, support for families and small businesses, and access to health care."

The organizing strategy is a part of a larger schema of organizations working to impact turnout on Tuesday. A number of different organizations — from Black Voters Matter to Voto Latino — are mobilizing voters. If increased turnout leads to Ossoff and Warnock defeating their incumbent Republican opponents (Sens. David Perdue and Kelly Loeffler, respectively) it will change not only the makeup of the Senate, but also the face of Georgia politics at the national level.

There has never been a Black senator for Georgia, meaning that 32% of Georgia residents have never enjoyed demographic representation even while their votes are routinely relied on to elevate white Democratic candidates. This year could be different. "White suburban moms of Atlanta, who ride for Jon Ossoff, will get introduced to Warnock, this Black pastor from the historic Ebenezer Baptist Church," Ufot said to The New Yorker. "And Warnock lends credibility to Ossoff in the Black pockets around the state that he couldn't buy."

But of course, Ufot said: "It all depends on getting out the vote and making sure the votes are counted."

More like this
What is court packing, and why are Democrats suddenly so into the idea?
By Ray Levy Uyeda
The Chauvin trial is incapable of delivering real justice
By Vanessa Taylor
Why grand jury proceedings are so secretive
By Vanessa Taylor
Stay up to date