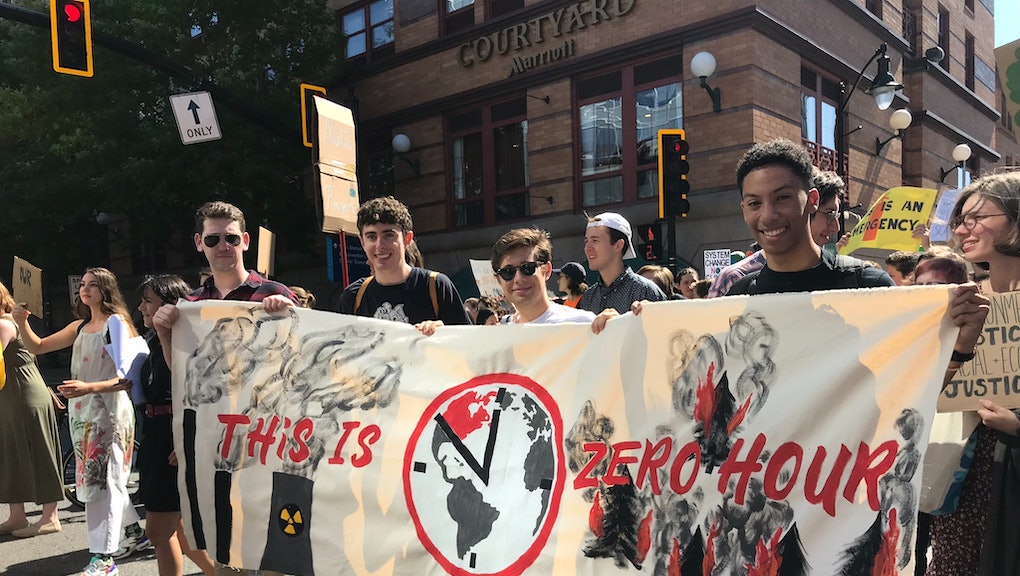 Zenagee Artis (right) and other members of Zero Hour at the 2019 climate strike in Providence, Rhode Island

Netflix’s The Politician, a satire of politics and millennial-zoomer culture, ranks among the most absurd television shows ever aired. Amid the multiple throples, the interlocking attempts at campaign espionage, and a self-parodying Gwyneth Paltrow becoming governor of California, one element in the second season stands out for its tonally odd earnestness: During a hotly contested primary for a New York State Senate seat, young voters, mostly of color, turn out in record numbers to carry the young challenger to victory, inspired mainly by his soaring, aspirational rhetoric on climate change.

This idea, that a candidate could win an election by embracing aggressive action to counter climate change, is a fantasy for young people in the environmental movement. Washington Governor Jay Inslee positioned himself as the climate candidate in the Democratic presidential primary and failed to attract a following; Bernie Sanders’s climate positions drew raves from the left but in the end his cohort of young voters were outnumbered by older, more moderate Democrats.

But breaking that trend is increasingly the goal for this generation of climate activists, who realize that fighting global warming means winning elections, and that means making climate the single biggest issue on voters’ minds. With the 2020 election less than two months away, young activists are making a big final push toward that goal.

The climate movement’s growing emphasis on elections and voters

One electorally-focused group trying to reach voters in Pittsburgh, Philadelphia, and Detroit is Vote4OurFuture. The group is an offshoot of Zero Hour, the youth organization that came to prominence when it organized a series of protest marches in 2018. Zenagee Artis, a Brown University student who cofounded Zero Hour when he was 17 and leads Vote4OurFuture, tells Mic that in the past few years, his activism has shifted in focus. In high school he organized a sustainability committee to force the school to get rid of styrofoam trays, set up a water bottle fill station, and recycle white paper.

“I was so focused on individual action,” Artis says, “rather than addressing these big systemic problems.” Like many activists these days, he now emphasizes changes that need to happen on a large scale, like changing laws and forcing corporations to stop harming the environment.

“One example that always comes to mind is the idea that if you go out and plant trees, that is your contribution to the environment and that is a really good thing,” he says. “Yes, reforestation is a method of addressing climate change, but it isn't a solution. An action like that really is just delaying the inevitable if you don't address the root causes of deforestation itself.”

Vote4OurFuture aims to address the root causes by educating voters about the harms of climate change and the benefits of the Green New Deal, the far-reaching progressive plan to reduce emissions, provide sustainable-energy and other green jobs to low-income communities, and reduce inequality of all sorts while creating a new economic vision for the country. The hope is that this message is particularly appealing to young people and people of color, who stand to benefit from the Green New Deal.

“When I think about what the mainstream movement is doing, most of their base is middle-class and upper-class white people,” said Artis. “We’re really targeting more low-income communities and frontline communities of color, who are being most impacted by this issue and who have the lived experiences of environmental justice.”

The group is targeting cities in Michigan and Pennsylvania as those states may together decide the 2020 presidential election. Originally, Artis tells Mic, Vote4OurFuture was planning a bus tour to meet activists and organizers face-to-face. But that had to be scrapped and now the group is mainly co-hosting webinars with local organizations and hoping to bring in people from social media.

The end goal is to get people to register to vote through Vote4OurFuture’s website—if they get registrations from targeted areas, they’ll know that the campaign is working.

A major part of Vote4OurFuture’s efforts is convincing people that the Green New Deal is the solution to all of their varied problems, even ones that aren’t immediately climate-related. Its jobs program could provide work for unemployed or underemployed people. Its promise of universal healthcare would allow currently uninsured people to get access to medicine. It could provide public transportation to underserved areas, make cities greener, and clean the country’s air and water.

Breaking down these components can be helpful for those who aren’t totally sure what the Green New Deal would do for them, says Khadija Khokhar, a Vote4OurFuture fellow in Detroit.

“We've tried to frame it as this very inclusive vision for a future that is going to benefit the economy as a whole but also people's families." - Zenagee Artis

“We've all heard about the Green New Deal,” she tells Mic, “but to actually break it down and see what it would mean in your community in your city... it makes it a lot more realistic and it makes it more of a possible future.”

One of the most effective ways to talk about the Green New Deal, Artis says, is to emphasize that the policy would offer good jobs in fields ranging from sustainable energy to construction. “We've tried to frame it as this very inclusive vision for a future that is going to benefit the economy as a whole but also people's families, especially those who are already involved in the industries that we're trying to transition away from,” Artis says. In other words, coal and pipeline workers could find new jobs installing solar panels and building wind turbines.

Joe Biden hasn’t officially endorsed the Green New Deal, but he’s taken a similar tack when talking about climate. “When I think about climate change, the word I think of is ‘jobs,’” the Democratic presidential nominee said in July.

Can you make more “climate voters”?

Vote4OurFuture isn’t the only group trying to mobilize young climate voters. The Sunrise Movement is trying to do so, as is the Tom Steyer–funded organization NextGen America. They’re making this push at a time when more Americans are concerned about climate change than ever before.

Jon Krosnick is a Stanford professor and the director of the Political Psychology Research Group, which has been polling Americans’ views on climate change for the past two and a half decades. According to him, a sizable majority of respondents believe that the Earth is warming, that this warming is caused by humans, that this change in climate is harmful, and that more should be done to stop it. Some polls have found that even many Republicans (especially younger ones) think that the federal government should work harder to fight climate change.

But these views don’t always translate to votes. An important concept in Krosnick’s work is the “issue public” around a given topic. That’s the amount of people who care so passionately about an issue that it informs the rest of their views. If you are part of climate change’s issue public, you are not just passively voting for Democrats in general elections, you are probably reading about climate change constantly, sharing your climate change views on social media, and voting in primaries for the greener candidate, even donating to them if you have the means.

The bad news for climate activists, Krosnick says, is convincing someone to join an issue public is really, really difficult. The good news is that a recent survey conducted by Stanford and the environmental group Resources for Our Future found what Krosnick described as the “second-largest issue public I’ve ever seen,” with 25 percent of respondents saying that climate change is “extremely personally important,” up from 9 percent in 1997. (The largest, at 31 percent, is abortion.)

Why are so many people getting fired up about climate change now? It’s not that more Americans believe that they are seeing the effects of global warming. That number, Krosnick said, “has been about 75% for quite a while.” It could be that more people perceive climate change as an immediate threat to themselves, since self-interest is often a driver of who makes up an issue public. Another factor in issue public membership is identity, so maybe more people are seeing that their group — however they define that group — is becoming more interested in climate change. Krosnick has another hypothesis, however.

“Americans have become more value-driven during the Trump presidency,” he said. “Many of us may have been on autopilot, going through life without necessarily questioning the fundamentals of how life should be lived on the presumption that basically the world is fine.”

But Donald Trump’s election shattered that perception. And as his administration has stripped away environmental protections and otherwise worked to accelerate climate change, many Americans may be inspired to fight back. “They realize, Oh, geez, I can't keep sitting here on the couch, I've actually got to get up and do something about this, because things are moving in a bad direction,’” Krosnick said.

How outreach could make a big difference

Part of Vote4OurFuture’s work is letting people know how they can make a difference. Many of the first-time or infrequent voters the group is trying to reach may not be sure how to vote, especially with states changing their procedures due to coronavirus. Others might not have good information about voting in a language they are fluent in. One key thing Khokhar mentioned is the need for Arabic voter guides for people in Dearborn, a Michigan town that has the country’s largest proportion of Arab-American residents.

While it’s unlikely a series of webinars and social media posts will swing the presidential election, there’s evidence that climate politics are becoming a live issue in smaller races. Groups like the Sunrise Movement have mobilized their army of passionate young people to help progressive Democrats win primary contests in New York and Rhode Island this year, and Massachusetts Senator Ed Markey’s defeat of his challenger Joe Kennedy III can at least partly be attributed to his embrace of the Green New Deal. Being an outspoken climate advocate, in other words, is increasingly good pragmatic politics for Democrats.

And building up climate change’s issue public isn’t just about a single election or a single election cycle. If more people think of climate change as their top priority, more politicians will cater to them. The Green New Deal was a radical notion even among Democrats when it was introduced in 2019. It could become a mainstream position sooner than anyone thinks, especially if the public connects natural disasters like this year’s record wildfires to climate change.

If anyone is going to lead that mass conversion effort, why not young people? Khokhar thinks that the teens and early-twentysomethings who will need to be activated as voters aren’t going to listen to older people. Previous generations are the ones who screwed things up so badly, so why should they be listened to?

“With youth voters, it takes more of a conversation and it takes more of a dialogue to encourage them, there seems to be a little bit of apathy there,” Khokar said. “It means a lot when you hear from a peer, when someone just like you is telling you, ‘Hey, you should do this.’”

More like this
Scientists are potty-training cows in an effort to save the planet
By AJ Dellinger
Biden's new office to fight for environmental justice already faces an uphill battle
By AJ Dellinger
100 years after the country's largest labor war, its dark legacy still looms
By Kim Kelly
Stay up to date