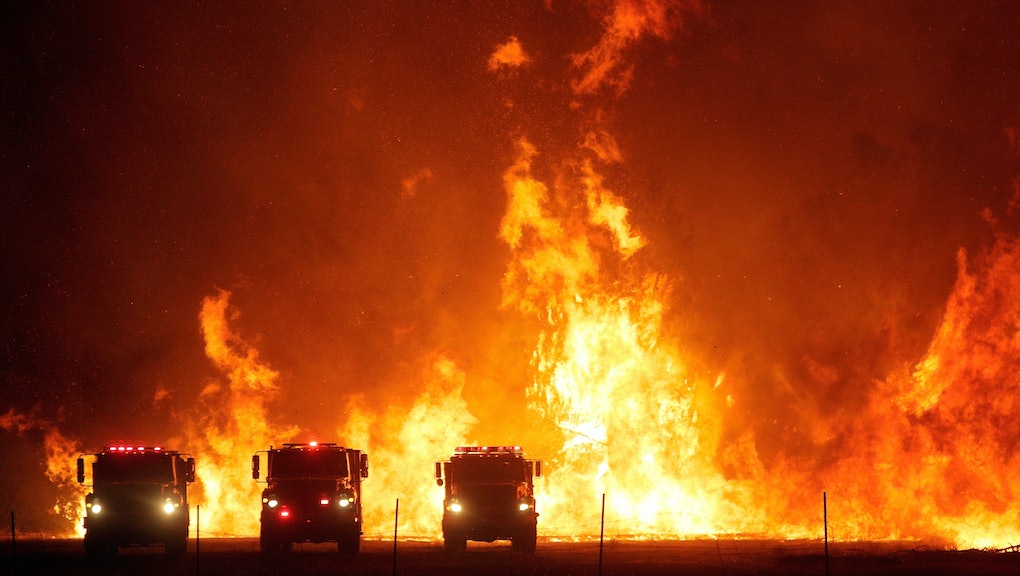 Why this year's wildfire season is particularly catastrophic

There’s a term Cal Fire, the state agency, uses for what has happened in California in the past few weeks: “lightning siege.” Thousands upon thousands of lightning strikes have landed on dry brush, sparking hundreds of wildfires, including some of the largest in state history. Since August 15, more than 1.4 million acres have burned, at least five people have died, and tens of thousands have been forced to flee their homes. The state is covered with smoke so thick it can be seen by satellites from space, and respiratory problems from that smoke will combine with coronavirus in ugly ways. It’s already an historic year of California fires and it’s only August. Fire seasons typically stretch into winter.

Why is this year so much worse than others? Let’s count the ways:

Human activity has made wildfires worse

Tim Brown, a professor and wildfire expert at Reno’s Desert Research Institute, says there are three elements that have made wildfires an annual crisis. The first is high temperatures leading to dry conditions, a problem exacerbated by climate change (and which is therefore likely to get worse for the foreseeable future). The second is that Californians have built homes in areas that are vulnerable to fires. This is understandable perhaps given the state’s housing shortage, but expanding into danger zones creates an inevitable risk: If you build it, it will likely burn. The third factor is what Brown calls “fuel availability,” which means that there are a lot of smaller trees and other plants that can act as kindling for “megafires.”

In recent years, environmentalists have embraced forest management techniques that clear out this flammable material. In particular, experts now advise “controlled burns,” where workers set fires to burn away the fuel before a megafire can take advantage of it. This is what Native American tribes were doing for centuries before white people came to California; fire actually helps the ecosystem, a fact not understood by the US Forest Service when it adopted a policy of aggressive fire suppression in the early 20th century.

The wisdom of putting out all fires as quickly as possible has been challenged since the 1970s, but experts like Brown say that governments could be investing much more in fire prevention. “Doing prescribed burning is far cheaper than fighting a wildfire,” Brown tells Mic. “Yet when you look at budgets for this on a federal level, the suppression budget far surpasses” the budget for longer-term preventative measures. For that to change, “it’s going to take some political will.”

Some Californians experience wildfire season as a life-threatening crisis that forces them to flee their homes. For millions more, though, the true danger is the smoke, which fills the air for miles beyond the edge of the actual fire and can be extremely toxic. Anthony Wexler, the director of the University of California, Davis Air Quality Research Center, told Mic last week that the air was so thick with smoke it reminded him of a visit to Kathmandu, Nepal, where smog allowed him to look directly at the sun.

The technical name for the particles of black carbon in the air after a fire is PM2.5, which means they’re smaller than 2.5 microns in diameter. At worst, these can cause heart attacks, but almost anyone who has lived in California can tell you the less serious health effects.

“Immediately from a respiratory point of view, there's all kinds of symptoms like eye irritation and cough,” Irva Hertz-Picciotto, the director of the UC Davis Environmental Health Sciences department, tells Mic. “Some people actually have difficulty breathing. People who have never had asthma will say they're wheezing.”

Hertz-Picciotto, who is managing a study of the long-term health effects of wildfires, worries that smoke inhalation could weaken people’s ability to fight off coronavirus. And the fires will cause injuries that will send some people to hospitals already dealing with overcrowding. “I was on a call with one of our emergency room doctors at the UC Davis Medical Center,” said Wexler. “She said, I've got burn patients coming in... I've got people coming in with respiratory problems because they're breathing this stuff, I’ve got people coming in who have COVID or think they have COVID.'”

The pandemic intersects with the fires in other ways.

As people flee wildfires, they’ll have to travel to other areas of the state and country, potentially spreading coronavirus or coming into contact with it. And the normal evacuation strategy of putting people in big shelters is obviously untenable since such places would be vectors for the disease.

It also complicates fire suppression efforts. Ordinarily, firefighters would be living in close proximity to each other in base camps, but now they have to stay socially distant from each other in camps and while en route to fires, complicating their already extremely difficult jobs.

What can be done?

There are some steps individuals can take to make their homes fire-resistant, like trimming trees and clearing brush around the perimeter of their properties (this is like forest management on a micro scale). Wealthy Californians can go further and buy state-of-the-art, allegedly “fireproof” homes, though it’s hard to imagine anything could survive a modern megafire.

Those affected by the smoke can wear a mask to reduce inhalation of PM2.5 particles—not the cloth masks that have become ubiquitous during the pandemic (those won’t block the harmful stuff generated by fires) but properly fitted N95 masks. A better idea is probably to stay indoors and avoid exerting yourself. “What I tell people is they have permission to be a couch potato right now,” says Wexler.

But even as regular people and state officials try to react to the existing fires and look at mitigating future ones, every year now brings with it the potential for a catastrophic fire season. Since 2017, which was then the worst wildfire year on record, California has been living on the edge. (2020, by the way, is already worse than 2017 in terms of acres burned.)

That doesn’t mean that every year will be worse than the year before; 2019 wasn’t particularly bad by contemporary standards. But climate change practically guarantees brutal summers from here on out, and that means there’s risk in every dry blade of grass

“If it's hot and it's windy and everything is right for a terrible wildfire, if no one lights the fire, nothing happens,” says Wexler. “If a PG&E line doesn't go down, or someone doesn't have a campfire, or someone's not mowing their lawn and the blade nicks a rock, which then has a spark… If that tiny little event never happens, you got a pass.”

Obviously, a lot of events have happened to start fires already in 2020. Will the rest of the year be as filled with flame and smoke as August, or will we get a reprieve? Californians can’t do anything but wait and see.

“Think of it like a hurricane,” said Brown. “You can do a lot of mitigation. But you can't stop the hurricane, right? It's of a magnitude that you just can't stop it with all the resources in the world. And so then it becomes important to mitigate the damage and also to adapt to the environment.”

More like this
What cities will be most affected by climate change?
By Vanessa Taylor
Google Earth's new Timelapse feature is a rude awakening for climate skeptics
By AJ Dellinger
The ocean is about to swallow a climate research facility, which feels fitting
By AJ Dellinger
Stay up to date