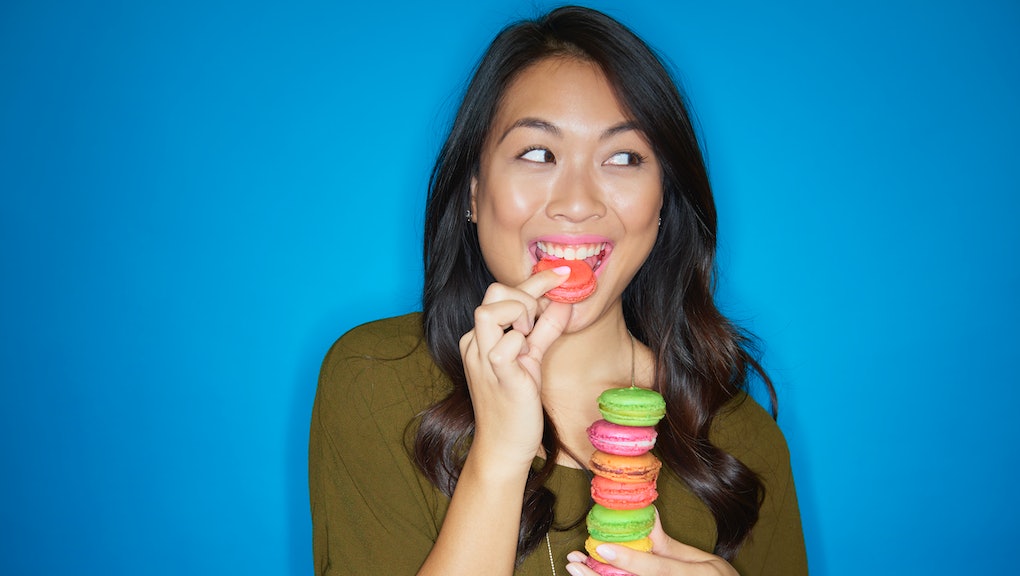 Is a sweet tooth actually a thing?

My youngest sister is a dessert fiend. At least once a week, she texts or posts a photo of a concha, cupcake, or other confection she bought to #treatherself. While I may share around half my genes with her, I don’t share her abiding love of sugar. (Salt is my vice — if you place a cheese platter in front of me, I will demolish it.) As we continue to hole up and eat our feelings during the pandemic, I wonder why my sister and so many others self-soothe with sweets, while the rest of us seek solace in other foods. Is a “sweet tooth” just a figure of speech, or does it have a biological basis? Is a sweet tooth actually a thing?

To get to bottom of this, I turned to experts in the science of taste. As with so much of science, the short answer is, it’s complicated.

But first things first: Sweet tooth or not, all of us are hardwired to like sugar. This makes sense, given that sugar contains the calories we need to survive, says Gary Beauchamp, emeritus director and president of the Monell Chemical Senses Center. “Humans and many species, particularly those that eat plants, have a specialized set of receptors and neural pathways to detect, recognize, and appreciate sweet taste,” he explains.

Even newborn and premature babies, who have zero experience with flavors outside the womb, show a “strong, innate, clear liking and preference” for sugars, Beauchamp adds. In fact, in research from the 1930s, scientists observed that when they injected saccharine into the amniotic sac, the fetus swallowed more, adds John Hayes, professor of food science and the Director of the Sensory Evaluation Center at Pennsylvania State University.

But while we share a primal preference for sugar, how strongly we prefer it varies from person to person. Research consistently shows that if we give people a sugar water solution, and gradually raise the concentration of sugar, they fall into three groups, Hayes tells me. For around 30% of people, “sweeter is always better,” no matter how much you increase it. Another roughly 20% of people rate low concentrations of sugar only slightly above neutral, and anything beyond these low concentrations as progressively worse. For most people, or 50%, the sweeter, the better — but beyond a certain concentration, the opposite is true. Their preference basically follows an inverted U.

Hold up, I think at this point in my conversation with Hayes. Most of us don’t sip sugar water on the reg. How closely do these findings reflect our preferences for actual sweets?

Few studies have tried to correlate people’s responses to sugar water solutions with their real-world food choices, Hayes responds when I pose the question, “but the studies that have, have found a connection. So if you’re in that group that likes the really concentrated sugar water, you also tend to like and eat more sweet foods.” In other words, my sister and others who have a sweet tooth might very fall into that 30% of people who remain unfazed no matter how much sugar researchers add to their water, and in fact, would prefer if they’d dump in more.

But as I continue speaking with Beauchamp and Hayes, the picture becomes fuzzier. Individual variations in preferences, while they exist, might not be all that substantial, according to Beauchamp. “It’s not clear if there are major differences in how much sweetness people like, but there are differences.” And for some, a sensitivity to bitterness might actually underlie a penchant for sweetness. Since studies have shown that these flavors suppress each other, “the idea is that people who are more sensitive to bitterness are actually more likely to reach for the sweetness to block out that bitterness,” Hayes says. But scientists have yet to carefully test this in a lab study that looks at, say, whether people who are sensitive to bitterness are more likely to add sugar to their coffee.

Although we have evidence of individual preferences for sweetness, we have less evidence of what causes them. So far, age does appear to matter, Hayes says. “Children tend to like really, really concentrated sweets,” but their preferred levels of sweetness tend to fall as they get older, possibly because kids are actively growing, which means they need more energy.

And contrary to popular belief, obesity doesn’t seem to play a role — that is, people who love sweets aren’t more likely to be obese, Hayes says. “Researchers have tried over and over again to define that connection. There doesn’t seem to be one.”

Likewise, the extent to which genetics contributes to our predilection for sugar is unclear. “There are genetic differences between people that predict how strongly they taste bitter compounds,” Beauchamp says. But do similar genetic differences that predict how we taste sugar also exist? “There might be some, but nowhere near as strong as there are for bitterness.” Hayes says genetic factors “are almost certainly involved,” but nothing a 23andMe test can pinpoint yet.

Environmental factors can influence how much we prefer sweetness, too. We know that culture — which shapes our diet — as well as the foods our caregivers fed us as young children determines our food preferences as adults, Hayes explains.

Okay, so we haven’t yet solved the puzzle of what underlies our preferences for sweetness — but can we at least change them by chilling on the cupcakes? “That is literally the six million dollar question right now,” Hayes says. Although there are plenty of personal anecdotes about people emerging from sugar fasts with a dampened desire for sweets, “there is no data to back that up experimentally.” The good news is, two large trials designed to answer this question are already underway.

So yes, there’s evidence that a sweet tooth is a thing —that some people prefer sweets more than others — but whether they prefer them that much more than others, and why, remains unclear. Whether we can change them is also a question mark, which might be welcome news for those of us who are worried that we might love Cinnabon a little too much.