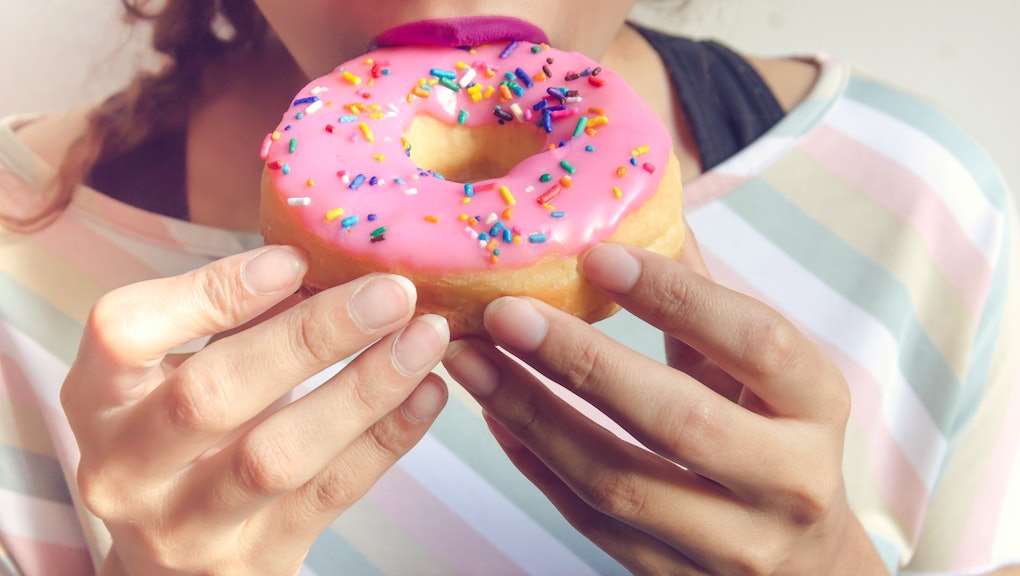 Why is sugar so addictive?

I have a deep and unbridled love for Cinnabon. My relationship with the food court staple runs deep. To date, I’ve devoured thousands of the leading denizens of doughy delight, turning to them in happy times and sad moments. I’ve noticed though, the more often I have them, the more I crave them — and crave sweets in general. Why is sugar so addictive?

I’m not being dramatic: Sugar is actually an addictive substance, according to the National Institutes of Health (NIH), who classified it as such around a decade ago. While sugar is not technically a drug or compulsive behavior — learning about what it does to us is crucial, especially if you’ve ever managed another type of addiction. It’s important to note, however, that using the language of addiction to casually say you're unable to stop something you enjoy is super problematic, unless you battle an actual addiction, so maybe pump the brakes before you publicly labeling yourself a chocolate addict.

Still, both excessive consumption of sugar and misusing drugs will lead you and your health to the same place eventually — although at different speeds, and in different ways. Sugar can have a drug-like effect in certain ways.

“Sugar — and particularly processed sugar — is the most available form of glucose we get from food,” says Ian Brathwaite, a London-based emergency medicine doctor and founder of Habitual, a diabetes remission service. “When we eat something high in sugar, that glucose effectively goes straight into our bloodstream and to our brains, which reward us for delivering glucose by releasing dopamine. The more we do this, the more this behavior is reinforced.” If that sounds familiar, that’s because that’s exactly what many types of drugs do to you: reward and reinforce.

The problem, however, is that we actually need sugar in our daily diet in order to function properly. “Our human ancestors had to scavenge for food to survive — their lives often depended on their ability to find food. In order to ensure we did this, our brains made eating a pleasurable experience, which is further reinforced by dopamine release the more we engage in the behavior,” Braithwaite says. Our bodies use glucose for energy; as cave people, that energy was used for hunting, gathering, and throwing spears at whichever food source was running by.

During prehistoric times, the only true sources of glucose that we had to consume were in honey, fruit, and vegetables, which were much smaller than they are today. Now that we have evolved, somewhat, to our modern lives, so have the options that we have for sugar intake, including processed sugar. The kind of store-bought white sugar most of us have is made up of fructose and glucose, but a lot of it — much more than we need. Also, sugar in fruit and vegetables and added sugar (like in candy) are not the same thing, since fresh produce includes other healthy nutrients like vitamins and fiber. So when we eat refined white sugar and not the natural stuff, we’re usually not getting any extra health benefits.

Unfortunately, we also often overestimate what we actually need in our diet, which lead to all sorts of problems for our bodies if we aren’t careful. “A large portion of fructose actually gets turned into glucose — but this only holds true if fructose is consumed in moderation. Most often, it’s not when we're eating something sugary, and when the body is overloaded with fructose, the spillover goes to the liver,” Braithwaite says. That spillover can lead to bad cholesterol, elevated blood pressure, and even chronic conditions like type 2 diabetes. What sugar does to us, ultimately, chemically perfectly sets us up for abuse and problems down the line. This is why (and I am not recommending this because moderation is everything) some “health-conscious” people shun it altogether.

A chilling fact: In the U.S., adult consumption of added sugars increased by more than 30% over the last 30 years, which means that in 1977, Americans had a much healthier diet in that respect. Also, according to the American Heart Association, American adults consume an average of 77 grams of sugar per day, which is far more than any health organization’s recommended amount. If you find yourself “addicted to sugar,” what can you do about it?

“Sugar cravings are simply a sign from the body that something is either out of balance or unfulfilled, “says Jillian Warwick, a St. Petersburg, Florida-based functional nutritional therapy practitioner, adding that the problem could be rooted in blood sugar dysregulation, hormone imbalances, nutrient deficiencies, or simply you’re latent sugar addiction and rearing its ugly head.

“Trying to ‘fight’ cravings is likely to backfire in the long-run as most people have a finite amount of willpower.,” she says, relatably. I know from experience that trying to completely cut out sugar is a losing game, especially if you don’t have the grocery budget of a Hollywood starlet.

Instead, Warwick advises her clients to focus on satisfying, whole foods, and cutting back on refined, processed foods. “In order to maintain a healthy blood sugar balance, it's best to combine any carb source with protein and/or fat to eliminate blood sugar spikes and reduce the likelihood of overconsumption or increased cravings,” she says.

As for the rumor that sugar is more addictive than nicotine or even cocaine, the research is not there, but everyone I spoke to for this story agreed that since sugar is basically everywhere, it’s harder to quit. There’s a high concentration of sugar in a surprising amount of processed foods: Ketchup, canned soup, and baked beans are known to have a high concentration of sugar, and a surprising number of “health foods” are also known to have sugar including granola bars and Vitamin Water, which contains 30 grams of sugar, which is similar to the sugar content of a can of Coke or a candy bar.

“The most important and most challenging part of habit-change is making it sustainable in the long term, and for many people cutting sugar out entirely just isn't an option,” Braithwaite says, adding that in many cases going cold turkey can lead to relapse back to old habits — or worse ones.

Most of us don’t have the steel to walk past a Krispy Kreme without being lured by its conveyor belt of glistening, glazed circles of joy. But there are simple ways to break out of the addiction if we're under the influence of sugar. “Instead of going cold turkey, I advise patients to allow themselves occasional treats, but to really take the time to enjoy them,” Braithwaite suggests. That makes savor, don’t inhale. “The negative cycle of berating yourself for eating something ‘bad’ is often what leads to relapse, so rather than avoiding sugar entirely it's much more important to know how to enjoy it in moderation.”

More like this
Is the Pegan diet really worth all the effort?
By Tracey Anne Duncan
Margarita burns: Why lime juice and sunshine don't mix
By Melissa Pandika
Remember the vaping crisis? Well, it hasn't gone anywhere
By Melissa Pandika
Stay up to date