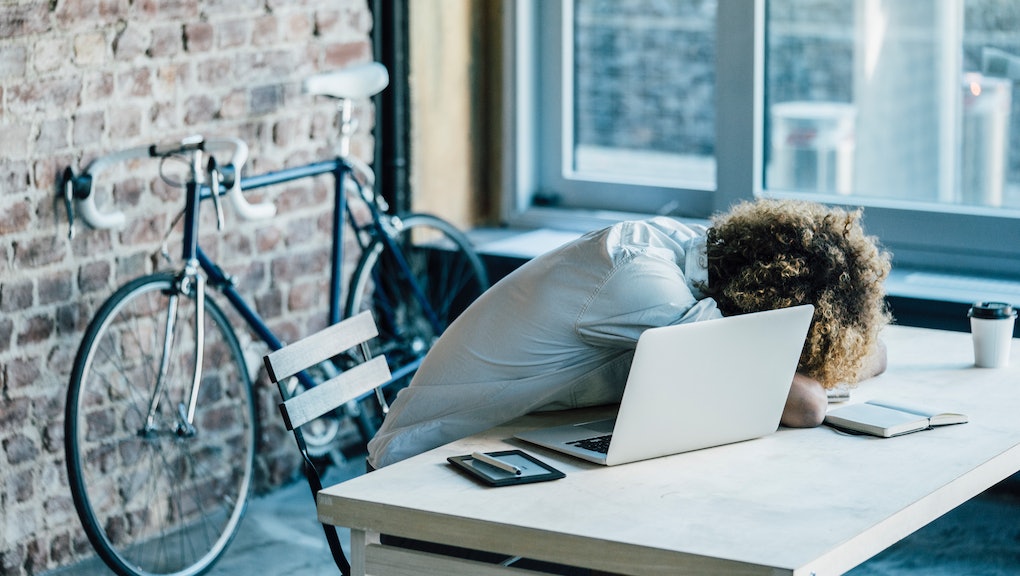 Is adrenal fatigue a real condition or are we just burned out?

“You mean my glands are tired?” I asked.

All of a sudden, almost everyone I know has something called adrenal fatigue, no one seems to be able to explain it, but it requires a lot of napping. I am 100% here for any diagnosis that prescribes naps and I don’t need everything to be proven by corporate-sponsored science, but the staggering number of my friends who have been diagnosed with this condition makes me curious and concerned. Is adrenal fatigue a real condition or are people burned out and depressed?

Adrenal fatigue is not an illness generally recognized by western medical doctors, says Michael Platt, a California-based physician, who specializes in helping people with hormonal issues. That doesn’t mean that the symptoms people experience aren’t real — they are — but they are a set of symptoms rather than a verifiable disease. He tells Mic that people diagnosed with adrenal fatigue, who frequently have symptoms like depression, low energy, and muscle weakness, often receive that diagnosis using saliva tests that measure cortisol, a hormone that regulates blood pressure and is released by the adrenal glands. The theory is that when the adrenal glands have become overstressed, they stop producing the amount of cortisol a healthy active human needs. Having too much cortisol stresses the body out, but not having enough cortisol makes you feel like a sloth.

When someone goes to a holistic doctor (sometimes called a naturopath), with sad panda symptoms and their cortisol levels test low, adrenal fatigue is the au current diagnosis. According to current research, the problem is that not only do cortisol levels vary throughout the day in each individual, there isn’t consensus about whether saliva is the best way to test those levels, and they could also vary for a lot of reasons that aren’t adrenal fatigue. One of the problems with this diagnosis, Platt (a medical doctor) explains, is that the adrenals — hormone-producing glands located right above your kidneys — also produce adrenaline, and reduced cortisol could also be due to the adrenals making too much adrenaline.

Some medical doctors seem ambivalent about the nomenclature, but think the symptoms of adrenal fatigue are real. “As a general rule there is a gap between what healthcare can diagnose and treat and what may be day-to-day issues that we cannot test for,” says Dilraj Kalsi, a London-based medical doctor who uses some holistic therapies. Kalsi recently founded Hippocrates Lounge, an online medical concierge service that helps people make personal lifestyle choices based on their medical history.

“Adrenal fatigue is certainly a controversial diagnosis. For every skeptic citing it as an unproven theory, there are patients and practitioners claiming they have had it and treated it,” he says. The theory behind adrenal fatigue makes sense to him, even though he asserts that the best medicine, in this case, is preventative. In other words, a healthy lifestyle will keep your adrenals from becoming stressed.

Because adrenal fatigue is, however, a trending diagnosis, there are a lot of supplements and treatments that claim to cure or treat it. I’m not trying to scare you, but some of these

products have some shady ingredients in them. “There are a lot of fringe practitioners selling bottles of supplements that are rubbish at best and frankly dangerous at worst,” says Yasmin Akhunji, a Virginia-based endocrinologist. “If you take some sort of adrenal ‘support’ formula that contains animal adrenal extract, your pituitary will think that there is too much cortisol in your body and will go to sleep,” she explains. And then your body will produce even less cortisol. The products that promise to help can make things much much worse. You might just get tired, but your adrenal glands might shut down, she says. Yikes.

The experts I spoke with agreed that adrenal fatigue symptoms should be taken seriously. “Aren’t we just tired?” I asked Akhunji. “To answer simply, yes,” she says. “Modern day life is stressful.” While she says that the adrenal glands could play a part, there’s no one-size-fits-all diagnosis for desperately needing a nap. “No two people are the same,” Akhunji says. “Having someone evaluate your diet, exercise, and sleep habits are just as important as having someone evaluate your lab values.” So, even if you don’t have an officially sanctioned disease, being tired and depressed all the time is a legitimate problem, and that’s worth tending to with or without a doctor's prescription.

This article was originally published on March 5, 2020

More like this
'Nine Perfect Strangers' is a deranged portrait of psychedelic wellness retreats
By Erin Qualey
We learned collective grief from 9/11. We could really use those coping skills right now
By Melissa Pandika
Uncontrollable, weed-induced vomiting is on the rise, according to new research
By Tracey Anne Duncan
Stay up to date