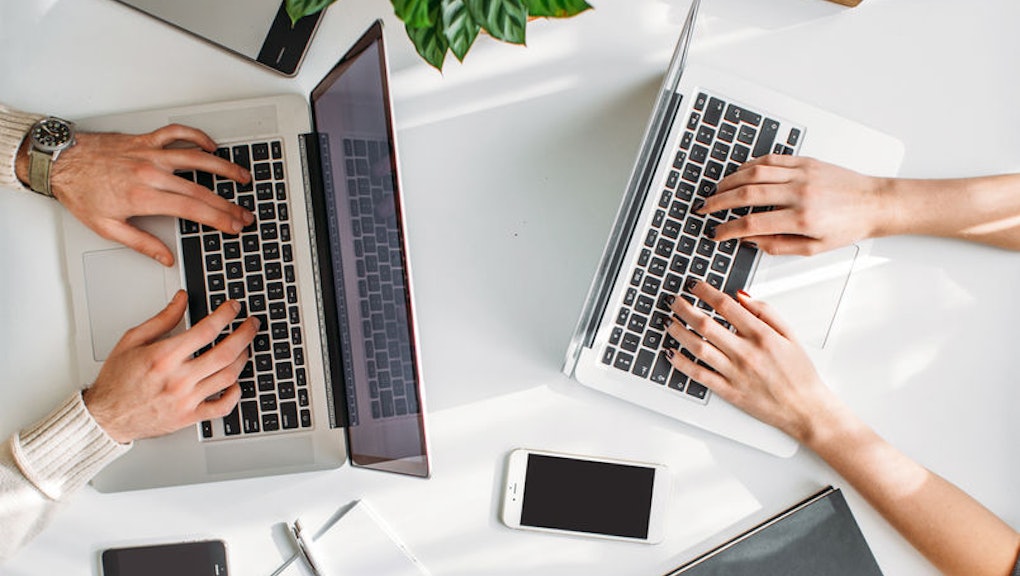 Is dating someone in your industry a bad idea?

For a very brief time this past year, I dated someone in the same field as me: a writer whose career was, impartially and deservedly, at least a level or two above mine, as she’d already been in the field for over a decade and a half. A top editor at a widely read science journal, she rose to that position while I was still teaching teenagers about topic sentences — something I did for 11 years.

I’d been a writer for less than seven years when we met, and from the outset I was a little concerned with how I’d ever emotionally deal with her enviable status in the industry, should our relationship ever go beyond dinner and drinks. After one date I was already telling myself, Dude, she’s been working at it way longer than you have.

Things seemed to be progressing fairly well between us, but soon another guy she’d dated a few months prior re-emerged after having a crisis of self or something, and told her he’d like another chance, this time with greater intentions. She took him back, and that was that.

Since then, I’ve danced around the idea of dating a couple other writer colleagues of mine, and in each case, when the topic came up, we said something to the effect of, “We’re both writers, this can’t ever work, can it?” Dating a person who does what you do — especially if you’re in a creative field — can certainly bring its own set of unique challenges. For artists and writers, the work we produce is so much more than a product — it’s a reflection of our identity. Any sort of competition can become heavy, quickly.

Issues that may arise when dating someone in the same field as you could stem from an imbalance, “if one person’s career is more successful than the other person’s, in a significant and real way,” says Jessica Carbino, a relationship expert and sociologist who’s led research for both Tinder and Bumble. A career imbalance between two partners can lead the one who perceives themselves as “less successful” to feel insecure, Carbino observes — though if the “successful” one is more insecure, it’s their partner who might still have to be the one to provide encouragement and support more often.

“When you see that imbalance associated with differences in achievement, that can be a very frustrating thing,” Carbino continues, “because it leads to, perhaps, questions regarding identity, and broader questions about should they be doing what they’re doing.” It can lead a person so ask themselves if they’re really an artist at all if they’re not recognized by their peers.

But sharing the same passion with a career-adjacent someone should also be rewarding, right? Since people are naturally attracted to others with whom they share similar backgrounds and values, Carbino concedes that dating someone else within the same creative industry makes “a great deal of sense.” Such a partner may better “understand the demands of your job, the rigors of it, the ups, the downs that are inherently associated with someone who works in a creative field,” she says.

However, success in such relationships is partly predicated on each partner being able to compartmentalize the other’s career, separating it from their own, Carboni says. This can be achieved by noting nuances within the creative work each person does — like when I pointed out to myself that the writer I dated focused on science stuff, while I wrote stories about the arts and culture.

In issuing compassionate words of encouragement or advice, tactful communication is as key in inter-industry romantic relationships as it is in any other.

Also, Carboni says that if both parties can combine such a foundational aspect of the relationship with the realization that the partnership works for reasons beyond the fact that they’re both in the same creative field, they may better mitigate the insidious impact that envy can have on a couple. In other words, if your partner also likes hikes and hamburgers or whatever else you prioritize besides career choice, that can lead you to feel more genuine happiness over their partner’s success because your relationship isn’t totally based on like careers. When things aren’t going so well at work for one partner, they might also then more easily accept support from their significant other — just as they would if they were in a different field entirely.

In issuing compassionate words of encouragement or advice, tactful communication is as key in inter-industry romantic relationships as it is in any other. “I think if it comes from a supportive place, people will appreciate it,” Carbino says. Couples that communicate well should be able to navigate such sensitive territories, even if both partners are in the same field.

And if one party is feeling down on their luck career-wise, and support from their partner is making them feel worse, Carbino says they could always see a therapist. The therapist would then provide a more neutral perspective, while reducing the necessity of constant encouragement regarding work from their partner.

Things between me and the science writer ended before they could really get started. When we parted, I told her I understood, wished her luck, and made her promise that if things with the other guy went south, she’d buy me a drink sometime. She agreed, so maybe one day I’ll be able to put all this into practice, and work around my insecurities and propensity toward envy in dating another in my creative field.