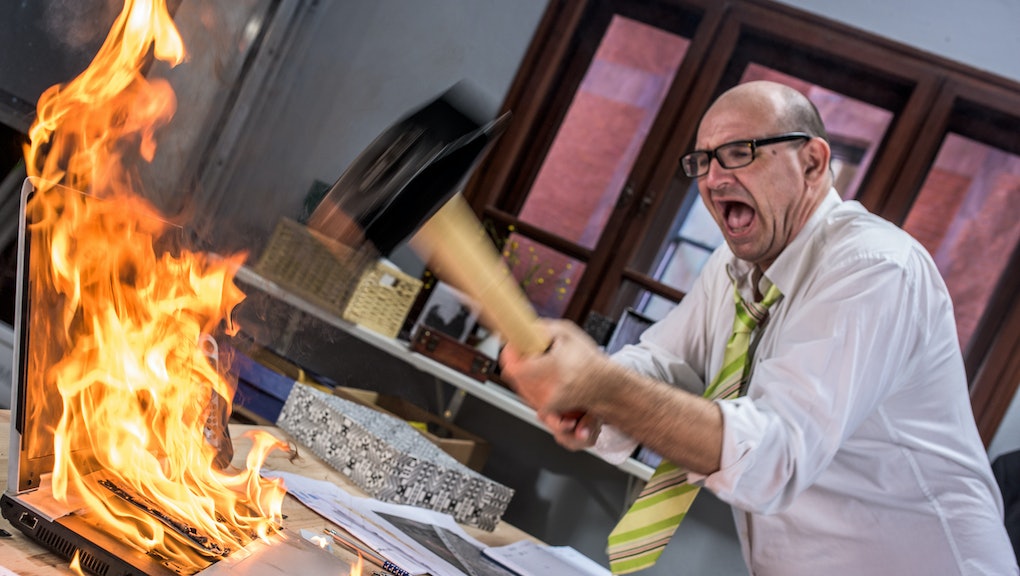 Is it actually possible to break the internet?

Millions of people around the world are being encouraged to shelter in place and work remotely in an effort to curb the spread of coronavirus. And while it's taking people out of the office, kids out of school, and cars off the road (and at least temporarily making our skies cleaner), it has everyone congregating at the same virtual place: the internet. If the internet were a highway, it would be experiencing an extended rush hour right now, and it has many people wondering if the traffic could get bad enough that the virtual roads start to jam or, worse yet, collapse entirely.

The question is front and center on the minds of regulators across Europe, who are concerned that networks across the continent will start to break under the additional weight of the work-from-home boom. The European Commission has gone so far as to ask Netflix and other streaming platforms to lower the quality of videos to standard definition in order to save essential bandwidth. YouTube has taken the initiative worldwide, dropping the default streaming quality to 480p for all videos. And the pressures of internet usage increases have already revealed some cracks across the web. Gaming companies, including Nintendo and Microsoft, have experienced outages and downtime for their online services.

Global internet activity is undeniably on the rise. According to data published by Cloudflare, internet traffic is up around 40 percent in Seattle, which has been in an effective lockdown since early March. Italy has seen a similar jump, handling about 30 percent more online activity than it saw prior to March 9, when a country-wide quarantine went into effect. These spikes in usage are higher than the global average, but more people are online than usual all around the world — Cloudflare data suggests increases between eight and 20 percent globally, while Ookla reported spikes of between 12 and 15 percent. If Seattle and Italy are indicators, those numbers will continue to rise as more cities and countries adapt shelter-in-place rules — the United Kingdom and India are the latest to join, and more states across the US are implementing these policies as well. So with more traffic increases likely on the horizon, will the internet be able to handle it?

Overwhelmingly, experts tell Mic that the internet as a whole is unlikely to be overrun by traffic to the point of collapse — at least on a broad scale. The internet as we know it is held up by backbone providers — networks owned by governments, private enterprises, and academic institutions. This backbone, illustrated by the Internet Exchange Map, is prepared to handle just about any influx of traffic that can be thrown at it. "As much as I hate to default to the pipes metaphor, [backbone providers] have enormous pipes," David Belson, senior director of internet research and analysis at the Internet Society, tells Mic. "They are capable of carrying astonishing amounts of traffic. That's not really the issue." His confidence was echoed by Roger Entner, founder and analyst at Recon Analytics, who says the internet backbone is prepared to accommodate a significant increase in usage. "For example, the largest European Internet exchange had its traffic increase from 5.8 terabits per second to 9.1 terabits per second. The capacity of the exchange is 54.1 terabits per second. They are running at 17 percent of capacity. US exchanges are similarly dimensioned."

Essentially, the likelihood of coronavirus breaking the internet as a whole is extraordinarily unlikely. Even with traffic spikes occurring around the globe, most of the internet's support beams are unfazed. Using that large European internet exchange as an example, to reach the capacity of 54.1 terabits per second would require something like 24 million simultaneous high-definition video streams. Given that there are dozens of high-capacity exchange points throughout Europe, it's unlikely that there could ever be enough traffic to completely overwhelm a single one of them. Similarly, the US is equipped with plenty of exchanges across the country that can handle just about anything thrown at it.

"It is a ‘web’ of different networks that are all linked together by ‘peering’ with each other ... It was purposefully designed this way for better resiliency. Like a starfish, it survives if one of its tendrils is damaged."

Where there are likely to be some issues, though, is on local networks — often referred to as the "last mile." When you set up your internet at home, or connect to an internet connection at a cafe or your work, the traffic from that network is typically handled by a local network operated by an internet service provider. In some cases, these networks are far less equipped to handle major upswings in traffic usage. "Providers … might be bringing together connections from some number of subscribers in a particular aggregation point," Belson explains. "Those aggregation points can be oversubscribed. That means the pipe upstream to the internet is smaller than the aggregate of the downstream pipes to the subscribers. He described it as the equivalent of turning four two-lane roads into two two-lane roads after going through a toll. "That's not going to work."

For now, most networks have been handling the traffic influx well enough. Stephen Liu, the director of strategy and product management for mass scale infrastructure at Cisco, tells Mic that most networks are designed to handle big jumps in traffic during peak hours — typically around 8:00 PM, where many networks are pressed with lots of streaming video content. According to Liu, traffic during those hours has not "dramatically increased." Where the uptick is largely occurring is between 9:00 AM and 5:00 PM, the hours when most people would otherwise be using their work or school networks. Liu says these jumps "are still below evening hour peak load."

However, there is plenty of concern that the stress on these networks will continue to rise as more people are told to stay home. "Responses to coronavirus are creating a perfect storm of stressors on the internet, especially on routes and traffic between residential networks and cloud, teleconferencing, telemedicine, remote desktop, and similar services," Ethan Katz-Bassett, an associate professor in the electrical engineering department at Columbia University, warns. While internet usage may not be pushed to the breaking point quite yet, Katz-Bassett notes that it is eclipsing historical usage, which could throw a wrench in the way that networks typically operate. "Networks provision capacity [is] based on historical trends and estimated growth, since traffic is typically predictable and periodic, but this unprecedented situation upends trends and likely outpaces networks' ability to provision," he says. As the traffic continues to rise, it might not "break" any given network, but it could affect the way that many people experience the internet as they know it. Videos may begin to buffer or degrade in quality as less bandwidth is available, internet-connected devices like smart speakers may take longer to perform tasks, access to cloud-based services and applications may become spotty and inconsistent.

These last-mile networks may buckle under increased pressure, but those pains won't be felt elsewhere across the internet. When these networks fail, it typically doesn't weaken the link of the rest of the web. "The internet is not just one 'thing' to break, Liu says. "It is a ‘web’ of different networks that are all linked together by ‘peering’ with each other ... It was purposefully designed this way for better resiliency. Like a starfish, it survives if one of its tendrils is damaged." Michael Rabinovich, professor of electrical engineering and computer science at Case Western Reserve University, explains that even with many people working from home, they are still likely to have their traffic run through the same exchange points as they might at work "[It is] going to be localized and not criss-cross the globe, which would be loading the backbones," he said.

If there is a way that the internet might "break" in a way that the whole world feels, it will be individual applications rather than a network itself. Services like Netflix, Spotify, Xbox Live, and the like all operate their own servers — or essentially rent servers from companies like Amazon Web Services. An increase of activity or demand to use these services could overload the servers and knock the services offline. Rabinovich says that if any part of the internet is likely to break, "my intuition is that it’s the end-servers."

So whilecoronavirus is unlikely to break the entire internet, it certainly might draw attention to some of its existing weaknesses. There is a chance that the increased burden from more internet traffic causes problems for local networks, but Belson notes that is something that could have been avoided through more investment in network capacity — particularly in rural areas that are often underserved by internet service providers. "The time to fix that was yesterday," he said.