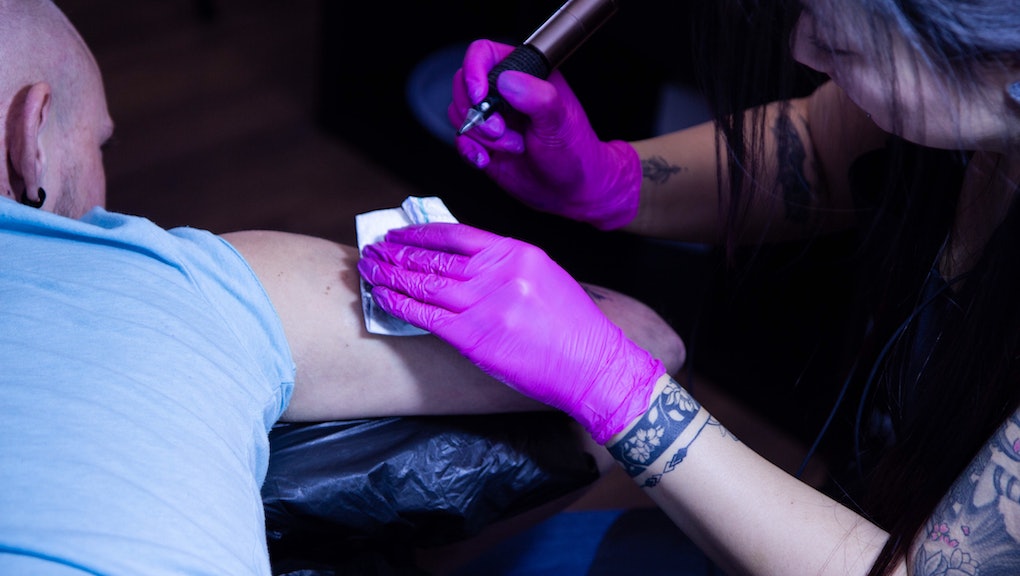 Is it okay to drink before getting a tattoo?

Bars and tattoo parlors go together like whiskey and courage. Here in New Orleans, as you might’ve heard, we have types of establishments in abundance. I’ve spent a decent amount of time in New Orleans tattoo studios, and I have often watched people drunkenly stumble from the bar to the studio and back again. As a heavily tattooed and mostly sober health reporter, this seems like a terrible idea to me. Why purposefully obtain what technically is a minor injury – and permanent addition to your look – inebriated? I could be being a little judgmental here, though, so I asked doctors: Is it okay to get a tattoo after you’ve been drinking?

The short answer is that while no doctor is going to recommend that you get wasted before getting a tattoo, most of them don’t seem to think it’s the most terrible thing, either. One noteworthy risk is that alcohol thins your blood and you might not want that to happen if you plan on getting inked, which generally causes a little bleeding. Basically what happens when you drink, explains Sabina Rebis, an internal medicine doctor in New Haven, is that platelets – the tissue in your bloodstream that helps a clot form – lose their ability to gather at the site of the wound. So it’s harder to stop a wound from bleeding. But, she adds, “since getting a tattoo is not a major surgery, drinking before getting one is not likely to kill you.” I mean, that’s a win.

The doctors I spoke with agreed that drinking (moderately) before getting a tattoo is not actually that problematic, physically. “It’s very unlikely to lead to problems,” says Taylor Graber, an anesthesiologist in San Diego who also runs a mobile IV hydration business, which a lot of people use to recover from hangovers. He tells me that the average healthy person would have to bleed 2500 to 3000 milliliters of blood before needing something as serious as a blood transfusion, and the blood loss, even from a significantly bloody tattoo, would likely be just a few milliliters. One thing to consider, though, any extra bleeding could affect your tattoo artist’s visibility when she or he is inking you, or it could thin the ink — and you don’t want that.

The bigger issue, as several experts pointed out, is that alcohol impairs your judgement. “Receiving a tattoo is a mostly permanent decision which can't easily be reversed,” Graber says, but adds that a little bit of alcohol may reduce any pre-tat jitters. Still, there’s the whole permanence issue.“Getting your ex’s initials lasered off is painful and, sometimes, not completely removable,” Rebis says. Damn. Yeah. Even if getting a drunk tattoo isn’t a serious health risk, no one has time for the kind of heartbreak that could induce.

This article was originally published on Aug. 1, 2020