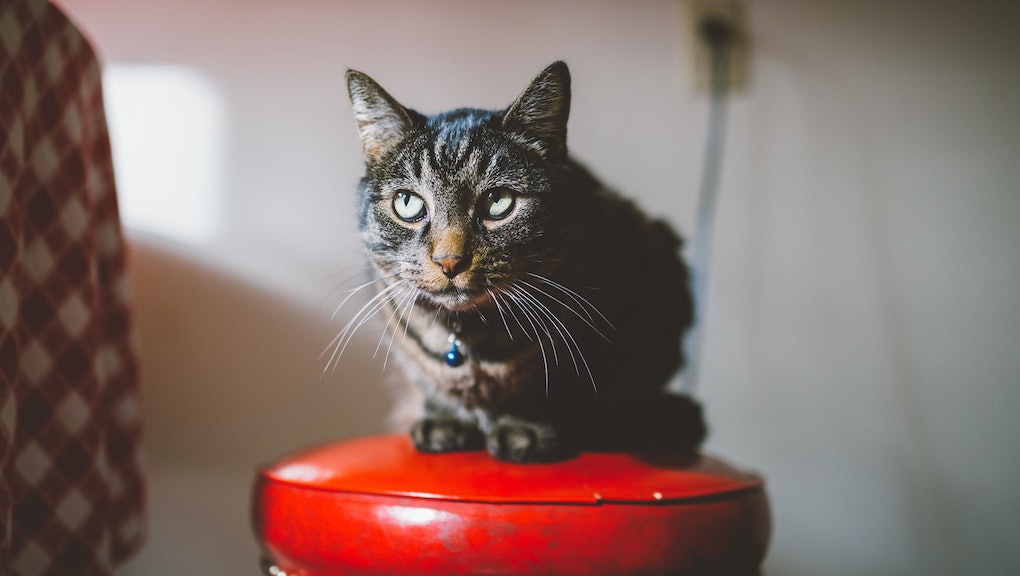 Is my cat happy? Vets break down their most telling behaviors

I have three cats. You can judge me, but I’m just trying to conform to queer cultural norms. Their names are Cabbage, Rainbow Dash, and Willie. They have really different personalities, but I think they’re all happy. I don’t feed them fancy food, but they do have the luxury of their own private entrance — they come and go as they please and they always come home. They seem to like living with me. They seem content. But how can I really tell if my cats are happy?

I’m not the only one who worries about her feline furbabies’ emotional wellbeing. “I get this question all the time,” says Adam Christman, a New Jersey-based veterinarian. “Cat parents want to make sure their cats are content. It can be confusing [to tell if they are], though because cats are so good in giving you ‘resting cat face.’”

“There’s so much that we misunderstand about cats and their body language,” Angie Krause, a Boulder-based veterinarian, adds. “Cats have emotional needs. Society has framed cats as standoffish. It’s not true. Because we misread them, their emotional needs don’t always get met.” The truth is that, however carefully we observe our pets’ behavior, we can’t totally know how they feel. We can, however, get smarter about how to read the signals they’re sending us.

I’ve had cats my whole life and I know that, just like people, they have needs beyond the basics and they thrive when their needs are being met. Cats need physical affection, even if sometimes it seems like they don’t really want it. Krause tells me that they just want that affection in a way that feels good to them “It’s not that they don’t want to be pet, it’s that sometimes we’re doing something wrong,” she says.

I tell Krause about my cat, Rainbow Dash, who often bites me when I pet her. “It could be that’s she’s a love-biter, but sometimes the bites are punitive,” she says. “It could mean ‘I don’t want you to pet me that way.’ Not all cats like full body strokes.” I often pet RD when she’s laying on her side. Krause says: “She might like it better on the top of her body. If she’s not running away when you pet her, she’s trying to tell you that she does want to interact with you, she just wants you to pet her differently.”

So if your cat doesn’t bolt in the opposite direction when you approach her, she probably does want to hang out, she just needs you to pay closer attention to her body language. “If your cat is happy, you’ll see them strut their stuff and waddle around the house with a proudly curved tail,” Christman tells me. “This is known as a ‘question mark tail,’ and it expresses the presence of a confident and happy cat.”

So, besides making sure we understand the subtleties of tail curvature, how can we keep our cats happy? “We need to keep in mind how much humans have changed cats’ natural lives,” Krause says. “We’ve kept our cats indoors, which feels safer for us, but it’s not natural for them. We’ve spayed and neutered them. We’ve changed their schedules a lot.” Cats are naturally crepuscular, which means that they aren’t nocturnal, but their energy peaks at dawn and dusk. Basically, by making them our pets, we’ve made cats adjust to the way we live. Now, Krause suggests, we need to think about, “how can we take cats back to their natural behaviors.”

“Cats in nature eat 10-20 times a day,” Krause says, “these bigger meals we’re feeding them are changing the pH of their body.” She tells me that, in the wild, cats graze all day and night on insects and small prey. They don’t sit down to big meals like we do. They also have to work for their food in the wild, and have evolved to enjoy that work. We can replicate the satisfaction cats get from catching their food by playing with them before they eat. “We can let them catch something, like a toy, before we feed them. That recreates their predatory instinct and releases stress. They need to be climbing the tree to get the bird.”

And while some cats are more playful in nature than others, cats will only act playful if they’re happy. In other words, they don’t front like humans sometimes do. “Your cat will only exhibit signs of playful behavior as the result of a happy environment, Christman explains. “Not only do happy cats act like they own the place, they show an interest in learning more about their environment, too. Cats express curiosity with widened eyes and a swinging tail from side to side,” he says.

While you might find it comforting to pet an animal, cats will only return your physical affection if they like you, Christman tells me. “If a cat is happy, they might hop into your lap and knead into your legs with their front paws. While the feeling of claws poking at your skin may not scream ‘affection,’ but cats view this gesture as soothing. Kneading into your legs or lap mimics the way that a kitten gets milk from its mother.”

My cat, Cabbage, is forever licking my hair. I thought she liked the coconut oil I use in it, but apparently, it means she digs me. “Happy cats will not only keep themselves clean, but also go the extra mile and lick you to make you feel like one of their own,” Christman says.

Not only will you cat let you know if they’re happy, they will also try to tell you if they aren’t. All the experts I spoke with mentioned that losing interest in self-grooming is a sign that a cat is unhappy. (I can relate.) Also, the litter box is a big giveaway. A cat pooping outside their litter box won’t necessarily indicate a medical problem — although it can — but it more likely means that they’re unhappy about something, Krause tells me.

There are still more ways to tell if your cat isn’t living their best life. “The biggest message to pay attention to is if your cat is not eating. Cats are very good at masking their signs of unhappiness and illness. If they go off their food for 24 hours, then something is up,” Christman says. “Also, hiding and not engaging with the cat parents is another big sign. Sometimes cats will go off into areas that they normally wouldn’t to show signs of unhappiness.” So even though, some cats love hiding for fun, if they start disappearing into unusual places, like in a closet or under a bed, they’re probably trying to tell you that their needs aren’t being met.

The biggest message I got from cat experts was that cats want to live with us, but they want us to pay attention to the details of their posture and behavior, just like bae. So put down your phone and pick up your cat. She’ll show you when it’s time for a selfie.

This article was originally published on Aug. 15, 2019