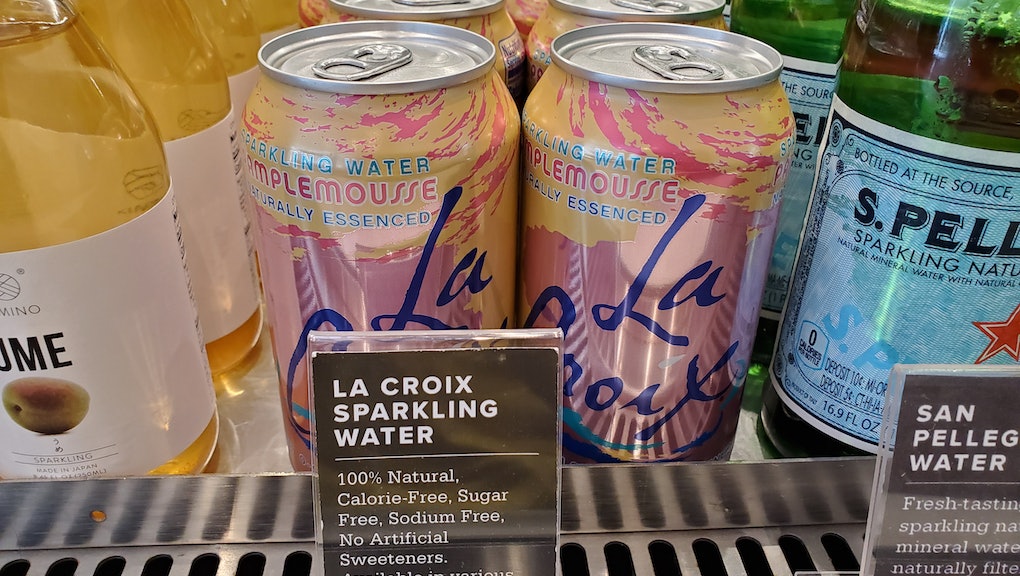 Is seltzer bad for you?

I was an early adopter of the sparkling water craze. By that, I mean that I used to steal Pelligrino from behind the bar at the nightclub I worked at when I was 22. Carbonated water was theft-worthy to me then, and it still is today, so the last thing I want to hear is that it’s bad for me. It’s water with tiny, life-giving bubbles. How can it be wrong? Still, given the amount of La Croix we all drink now, it seemed worth investigating whether carbonated water is bad for you or if some people are just sparkle haters. Here’s what I learned.

“Apart from the bubbles, there is no difference between carbonated water and regular water,” says Giuseppe Aragona, a general physician in Cosenza, Italy and medical advisor at Prescription Doctor, a telemedicine practice. Structurally speaking, H20 is H20. It does not somehow become less water-ish water once you put bubbles in it, which means that it can still do all the things for your body that regular water does. “Carbonated water can still be as hydrating,” Aragona says.

Before you celebrate by buying another 12-pack, consider that the addition of carbon dioxide to the water does cause the drink to become acidic. As do the flavorings, Kerry Jones, a registered dietician in North Carolina, tells Mic. So, while water doesn’t change with carbonation on a molecular level, its pH value does. Carbonated water is made of water, carbon dioxide, and various additives, like sweeteners or fruit aromas, and those additions add more than flavor.

“Acidic drinks make your teeth more sensitive to abrasion and may lead to cavities,” says Mike Golpa, a dentist based in Las Vegas, echoing Jones's findings. “Flavors make them more acidic, and therefore more harmful to our dental health,” Golpa says. We can, however, mitigate some of the potential harm to our chompers by waiting to brush our teeth for 30 minutes after drinking them to give our enamel a break and also by drinking carbonated water quickly rather than sipping. “This way you minimize the time that your teeth spend in an acidic bath,” he explains.

It can be kind of confusing to decipher how "natural" the flavorings used to give carbonated water its perky brand appeal. “When it comes to water that is flavored with fruit essences and flavorings, there is a lot typically contained in those flavors,” Ryan Lowery, a Tampa-based sports nutritionist, says. I get the idea that my beloved La Croix, then, is not as innocent as it appears even if there’s no processed sugar in there. “Though it sounds simple, ‘flavors’ — both natural and artificial — are complex mixtures comprised of dozens of chemicals including solvents, emulsifiers, flavor modifiers, and preservatives.”

So while you may assume that a drink that calls itself “natural” is good for you, no one is actually sure about that. “The jury is still out on the dosage and frequency of consumption that is needed to actually have a negative effect when it comes to carbonated flavored waters,” Lowery says. He suggests adding flavoring yourself — like a spritz of lemon or lime — if you want to be sure you know what you’re drinking.

Dental concerns aside, the experts I spoke with agreed that while it may not be “good” for you, carbonated water probably isn’t actually bad for you, either. Phew. It can, however, give you gas. Kerry says that it doesn’t happen to everyone, but those that tend to be prone to bloating, belching, and gas might want to either avoid carbonated water or drink it without a straw, which, she says, can add even more air into your body. This is kind of a double-edged straw, though, because Golpa says that straws are a good way to avoid some of the damage carbonated bevvies can cause to tooth enamel.

Dental concerns aside, the experts I spoke with agreed that while it may not be “good” for you, carbonated water probably isn’t actually bad for you, either.

If you care about climate change, by the way, some experts think that aluminum cans are better for the environment than plastic bottles. Let’s be honest, though, nothing is better for the environment than not putting water into disposable bottles at all. So, if you want to have some control about what’s added to your sparkling water and also maintain a reasonable carbon footprint, home carbonation machines are the way to go. As a long time Soda Stream lover, I can also tell you that you can add extra bubbles when you make your own. If you’re into that sort of thing.

All told, it turns out that you probably don’t need to worry about whether carbonated water is bad for your health unless you’re gassy or drink so much that it eats your teeth. As Aragona reminds me, “Be careful with anything you drink, but also don't believe everything you see on the internet.”

This article was originally published on May 20, 2020

More like this
Is the Pegan diet really worth all the effort?
By Tracey Anne Duncan
Margarita burns: Why lime juice and sunshine don't mix
By Melissa Pandika
Remember the vaping crisis? Well, it hasn't gone anywhere
By Melissa Pandika
Stay up to date