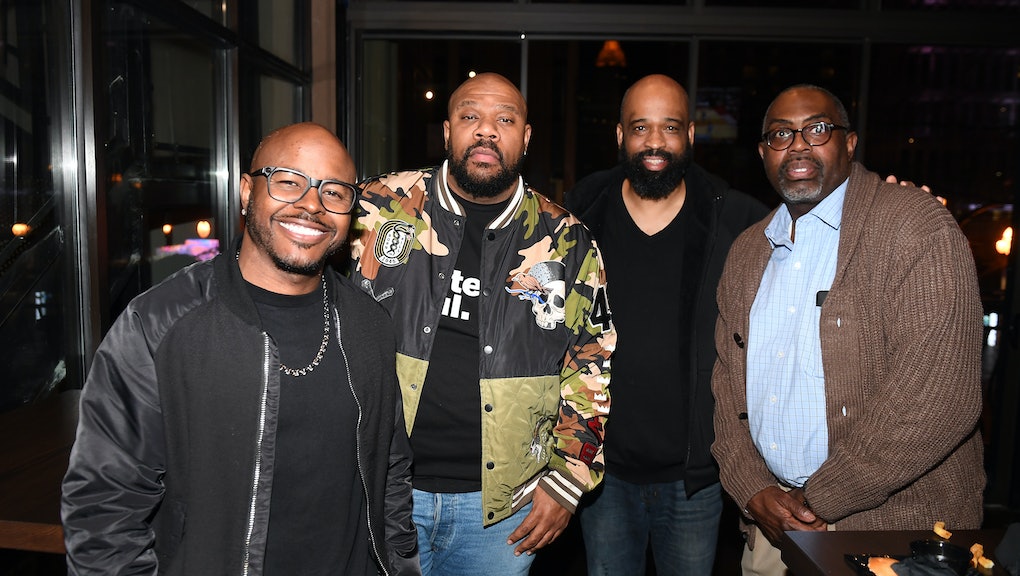 By 1976, Isaac Hayes was the king of soul music, an Academy Award winner for this theme song on the 1971 film Shaft, and one of the most recognizable voices in the world. He was also bankrupt. His label Stax Records faced financial hardships in the early 1970s and failed to pay Hayes royalties for the work he made. As a result, the man whose Hot Buttered Soul album sold more than one million copies had to take out loans with Union Planters Bank, which put him in a level of debt that forced him into bankruptcy once the albums stopped selling as much. Hayes had to give up rights to his music and royalties as part of the bankruptcy and didn't receive any compensation from the use of his work for decades until his death in 2008.

Since then, his son Isaac Hayes III has made it his mission to get his father's music rights back to the Hayes family. Over the years, he has watched Black culture become the epicenter of cool and the Black creators behind it not be properly compensated. Now, as a tech entrepreneur, he's unleashing a new social media platform aimed to make sure no one gets robbed the way his father did.

"My father was a predatory victim of the music industry in the way some of his music rights were handled. That’s content in the form of music publishing and masters," Hayes III told Mic. "Now that we’re in this digital space and all sort of content is being made, Fanbase gives the ability for people to own their opportunity, democratize their distribution and access their monetization without having to go through larger companies that either have predatory deals or take advantage of the user."

Fanbase is a subscription-based social media platform built to be an alternative to nearly every major social media app attracting creators. The main page is a copy of Instagram's feed with scrollable content. Similar to OnlyFans and Patreon, you can unlock special content from users by either purchasing "loves," which cost roughly $1 per 100 loves, or buying subscriptions that range from $3.99 to $19.99 per month. Fanbase takes a 50% cut of all revenue generated, more than double what OnlyFans and Patreon take, but unlike OnlyFans and Patreon, Fanbase is built around fostering community.

The company is also developing an upcoming music video editor, putting it in direct competition with TikTok. Before they roll out their TikTok competitor, Hayes III says Fanbase is launching a creator advisory board in response to kids being “shadow banned and blocked on TikTok because of their color or sexual preference or things they’re saying.” When you open the app, it invites you to sign up and join the advisory board, but makes a point to mention the app is especially interested in having Black creatives part of the board. Hayes III tells Mic that Fanbase isn't a Black-only social media platform, but that it aims to empower Black creatives by removing the racist roadblocks that have caused other platforms to curtail creators' potential.

"We don’t have algorithm that focus on skin color or content. So if you say something about Black Lives Matter or LGBTQ rights, we’re not going to suppress your content or your voice. What Fanbase has that other platforms don’t have is we’re not bound by ad revenue," Hayes III attested. "If there is a company that doesn’t want their ad to show next to anything that says Black Lives Matter, who do you think the platform is going to listen to? You or the brand that pays them? The only way the platform can do that is by suppressing the content so that more people don’t see a post talking about George Floyd when someone is trying to sell a pair of sneakers or some clothes or a car or whatever."

Content suppression of Black creator content partly catalyzed the recent Black TikTok creators' strike from earlier this year. The year prior, Black TikTok creators claimed their Black Lives Matter-centered videos were being suppressed on the platform, leading to declines in viewership and engagement of their content. Hayes III raised $3.5 million in June for Fanbase on the crowdfunding platform StartEngine, and counts notable Black celebrities such as Snoop Dogg, radio host Charlamagne Tha God, and Real Housewives of Atlanta star Kandi Burruss as investors. Hayes III said they joined on because they can see Fanbase as a way for Black people to get more than a piece of the money made from their cultural cool.

“Rather than those small deals that are made by those licensing the music or hiring someone to choreograph that video, monetizing the culture from the creation of the content is why Snoop, Charlamagne, and Kandi are invested in Fanbase. They know this is a real shot to actually take advantage of the culture, from the infrastructure side and not just the brand deals."

As much as Fanbase can be a tool for change, Hayes intimates Fanbase's importance is as symbolic as it is pragmatic. Only 2.7% of the highest roles in big tech companies are held by Black people, a startling fact that can be attributed to racially ignorant actions from the biggest social media platforms, such as TikTok's suppression of Black content. You can't change who eats off Black culture if you're not at the table with your own seat. Hayes III sees himself as a representative of Black culture sitting at that table with the likes of Mark Zuckerburg and Jack Dorsey in the tech world, a lofty goal for a visionary at the beginning of opening people's eyes up to the future he sees.

A lot of Fanbase's appeal is its potential rather than the actual platform. While Hayes III doesn't reveal an exact number of the users on the platform, he does say that the count is nearing six figures and the company points to 85% of its user base being people of color. Hayes III differentiated Fanbase from Clubhouse by highlighting how the latter is an echo chamber of opinions powered by the app's inability to allow users to find audio rooms outside of the friends they follow. Hayes III says that on Fanbase, you can search for any topic that interests you and dive right into a discussion. This is true in theory, but when I signed up earlier today around 1 PM ET, there were only five audio rooms occurring, with between 10-30 people in each room. That's a far cry from 45 rooms I could scroll through on Clubhouse with hundreds of users in them around the same time as when I signed up for Fanbase, with topics ranging from NFTs and Bitcoin to sexual satisfaction for women and polygamy. That's more than likely a result of Clubhouse having nearly 100 times the amount of active users compared to Fanbase.

As of now, success for Fanbase would be found in it rising from novelty to being a legitimate option for Black creatives to foster community and monetize content. Hayes III attests the platform is paying out "hundreds of thousands of dollars a month" to Fanbase users, with some users making over $1,000 a month and others making enough to pay bills. Fanbase isn't a Black version of anything. It's the manifestation of a Black man's dream of giving those that make popular culture move forward equity in the world's usage of their art. It just so happens Black people run everything the world thinks is cool, just as Hayes III's father did decades prior.

“Black-owned doesn’t mean Black only, so it’s not a platform that separates people," Hayes III says. "It’s to get people to understand Black people can do the exact same thing and be inclusive, but the culture of Black people is at the forefront rather than it be appropriated, banned or manipulated as it has been on those other platforms.”

More like this
A #MeToo’d Ryan Adams made his bed and now seems pretty uncomfortable in it
By Chloe Stillwell
This restaurant's viral anti-vax stance is a sad, predictable sign of our culture wars
By Brandon Yu
Issa Rae, Lil Nas X, and J-Lo just gave us a masterclass in social media
By Keith Nelson Jr.
Stay up to date