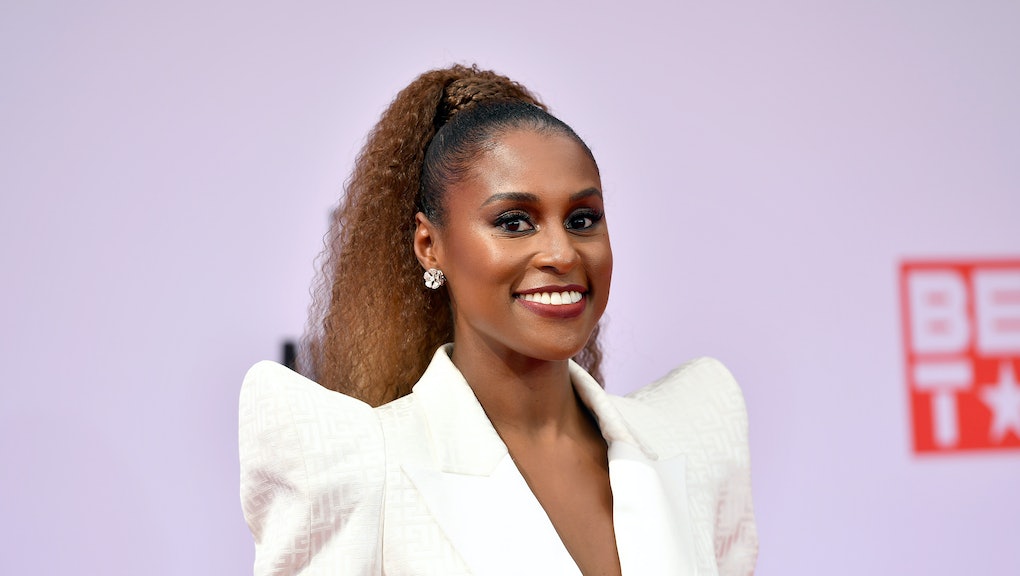 Social media isn't a game, but if it was, Issa Rae just yelled checkmate. Today, the Insecure creator and prototype for millennial Black creatives of the last decade shocked the world by dropping a photo dump of images from her private wedding to her longtime boyfriend Louis Diame in the South of France over the weekend.

Rae has successfully traversed the unpredictably invasive waters of social media for more than a decade by always being in on the joke, and her wedding announcement exemplified that skill of hers. Besides dropping the glamorous photo set on Instagram before most people in Los Angeles were awake, she crafted an Instagram caption that marries the everywoman relatability and self-made dynamism that defined her career. Her wedding photos came from what she described as an "impromptu photoshoot" while also featuring the blushing bride in a "custom Vera Wang dress." Her bridesmaids were simply a group of her closest friends who coincidentally, and embarrassingly, showed up in the exact outfit. And the man she had her arms lovingly interlocked with was "Somebody's Husband"— her groom.

Honestly, she described her wedding day with such smart comedic writing it could be the plot for an episode in the upcoming final season of Insecure. This sort of social media-savvy management of fan expectations is a reflex for someone whose career birthed largely from internet culture at the inception of this modern era of social media. When Rae was ready to work for herself and stop working at a museum for a slave ship exhibit in 2010, there was a tweet documenting the moment. When a tweet comparing Gucci Mane's smile to hers receives tens of thousands of retweets, Rae deduces it as a sign of her popularity, remarking "a lot of people have to know who I am for that many people to get the joke!’" She learned how to give the internet just enough of her humor to find her funny but not think she's a joke, and enough transparency for them to feel like they know her without feeling entitled to always know more. And it's a blueprint we've seen on full display this weekend.

On Friday, Lil Nas X set social media ablaze with his highly anticipated, jailhouse "Industry Baby" music video collaboration with Jack Harlow. For a little under four minutes, the visuals had naked shower dance routines with fellow male inmates, Harlow being electrocuted in an electric chair, and Lil Nas X leading a prison revolt. As with anything associated with the "Montero" controversy magnet, the video attracted critiques — about assumed heterosexual Harlow choosing to have a female love interest in a video set in an all-male prison, and the typical gripe of Lil Nas X attacking male masculinity with no artistic value. This was light work for an artist whose music career was literally born on the youngest social media app of the major players, TikTok.

After Harlow clarified he would've gladly did the shower dance scene, Lil Nas X used the opportunity to sarcastically point out how overblown the entire controversy was by tweeting “to the lgbtq+ community i sincerely apologize. i have failed you. i am embarrassed. i am ashamed. and i will learn from my mistakes." When it came to the tweets criticizing the video as an emasculation of Black men, the precocious 22-year-old artist decided to use his platform to explain to his critic and his 6.6 million Twitter followers that sort of criticism is rooted in a misogynistic view of femininity as weakness and a fear to see Black men as anything other than strong. Similar to Rae, Lil Nas X knew when to be the jokester, when to be the truth teller, and how to always use social media as a means to be in control of the narrative you want the world to know about your life.

In the midst of Lil Nas X giving college-level lessons on Black masculinity and Issa Rae giving a masterclass on staying low and building, the timeless wonder that is Jennifer Lopez decided to use social media to announce a nostalgic reunion with early 2000s beau Ben Affleck weeks after anyone with a pulse and cell phone data knew. But, not only did she post her first photo of the couple to celebrate her 52nd birthday, her and Affleck also recreated the butt-rubbing, yacht-cruising, business-minding photo from the music video of her 2002 hit "Jenny From The Block." Was it intentional? Was it a serendipitous privacy invasion? Was it promotion for "Jenny From The Block 2: Ben There, Done That?"

No one knows, and masters of social media like Rae, Lil Nas X, and J. Lo have survived by not letting others' opinions dictate their lives.

More like this
After shutting up for a minute, celebrities want everyone to listen to them again
By Brandon Yu
Lil Nas X’s ‘Montero’ is a vulnerable guidebook on self-acceptance
By Brandon Yu
Willie Garson’s pristine performance on 'Sex and the City' changed queer representation forever
By Chloe Stillwell
Stay up to date