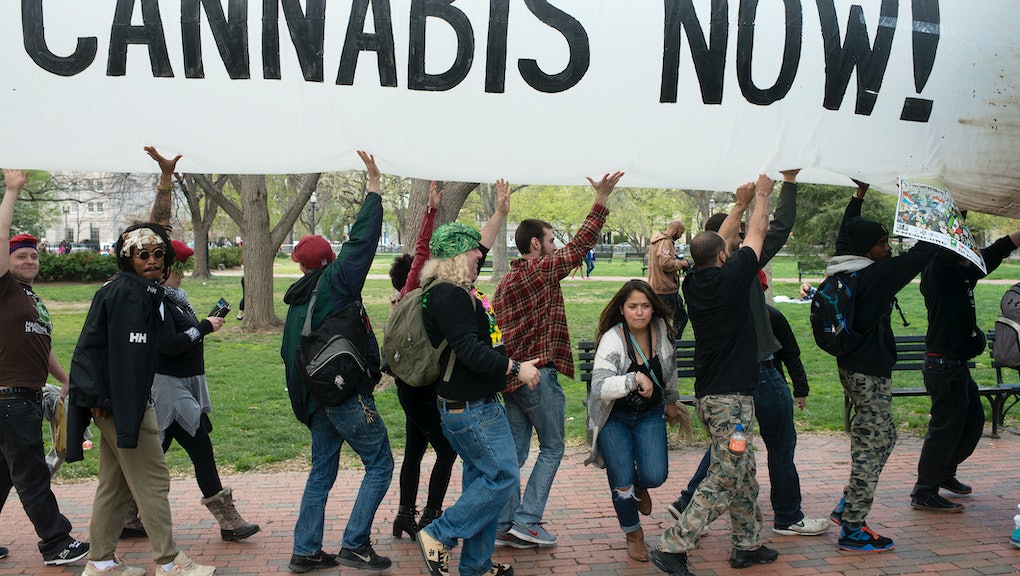 It's hard to imagine a better encapsulation of the Democratic Party's completely nonsensical approach to cannabis than a new report out today claiming the Biden administration is quietly pushing out "dozens" of staffers for their past pot use — less than a month after separate reports indicated the White House would waive certain hiring restrictions for administration staff who'd previously indulged in "limited" cannabis use. "It's exclusively targeting younger staff and staff who came from states where it was legal," one former staffer told The Daily Beast.

A White House spokesperson pushed back on criticism of the anti-pot policy, telling The Daily Beast:

This decision was made following intensive consultation with career security officials and will effectively protect our national security while modernizing policies to ensure that talented and otherwise well-qualified applicants with limited marijuana use will not be barred from serving the American people.

Historically, past weed use has been a disqualifier for certain government positions that require high levels of security clearance. The restriction has either led people who admit to past use to be barred from certain positions because they can't get clearances, or to lie about their past use on background check forms — and then be fired or asked to resign because the lying comes to light.

But, per sources who spoke with The Daily Beast, staffers who'd initially been given the impression that past weed use would not automatically be disqualifying for certain White House positions have instead been suspended, and even asked to resign, during a series of calls with President Biden's director of White House management and administration.

White House Press Secretary Jen Psaki confirmed on Friday that five staffers had been fired as a result of the new policy.

The unexplained about-face from the administration reflects a larger schism within the Democratic Party — and particularly the party under Biden himself. While the national legalization of recreational cannabis already underway in more than a dozen states is wildly popular — and particularly within the party — Biden himself has steadfastly refused to endorse federally legal pot, instead opting for the piecemeal "decriminalization and declassification" approach that would continue to leave recreational users in a state of legal limbo.

Compounding the confusion is the question of why past casual marijuana use would even be a disqualifying factor for security clearances in the first place, when other recreational intoxicants (alcohol and nicotine, for instance) evidently are not. The Daily Beast reported that the rule has targeted people from states where the drug is legal, further muddying the reasoning.

Nevertheless, the fact remains that the stigmatization of a substance that is entirely legal in some states, and largely accepted as comparatively harmless, is still somehow responsible for preventing otherwise qualified young prospective civil servants from contributing to the betterment of the country. And given the administration's apparently uneven application of its drug policy, it's hard to imagine those who may have once seen a Biden White House as the means to overturn decades of racist drug policy are feeling quite so optimistic now.

More like this
Biden's idea of filibuster reform is to bring back painfully long and boring floor speeches
By Vanessa Taylor
As Biden nears an elusive infrastructure deal, Trump is saltier than ever
By Rafi Schwartz
Andrew Cuomo sexually harassed multiple women, attorney general investigation finds
By AJ Dellinger
Stay up to date