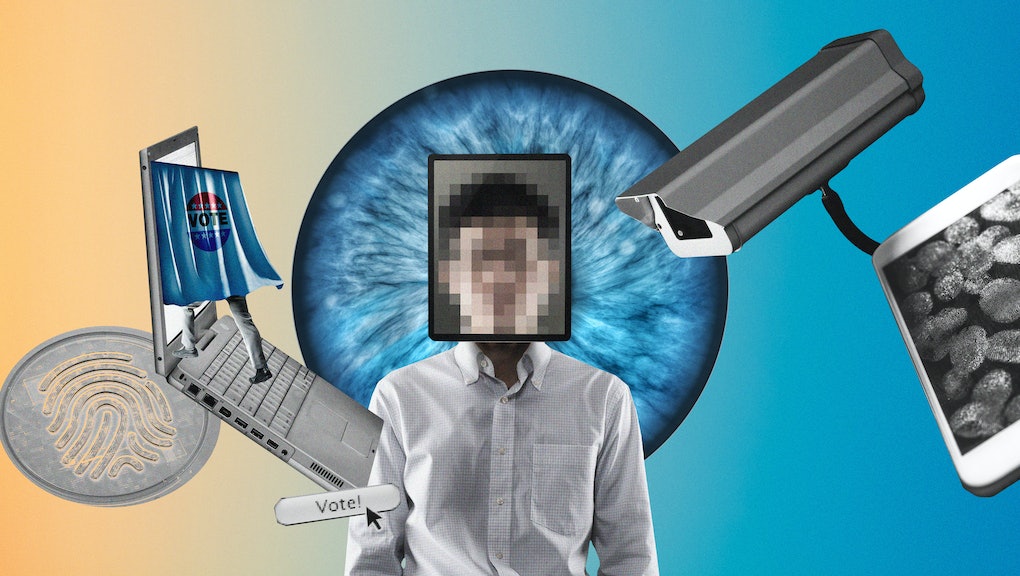 Technology has come a long way since voting began in the 18th century, but the way we vote remains largely the same. Despite the fact that we all walk around with tiny, incredibly powerful computers in our pockets, online voting is not widely available and most people in the United States still vote by showing up at their polling place, waiting in line, and putting pen to a paper ballot. The lack of innovation and technological advancement in voting has never felt more pressing than in 2020, with a global pandemic keeping vulnerable populations cooped up and concerns about the reliability of mail-in ballots due to a lack of funding for the Postal Service.

The United States has been trying to figure out internet voting since 2000, when Congress gave the Department of Defense the go-ahead to explore the technology for use by overseas military members. The DOD decided to kill the project after just four years, citing security concerns.

Now, 20 years later, experts Mic spoke with still don't believe we have the ability to make internet voting feasible. "Given the current state of technology, there is no known way to secure a digital or electronic ballot," Juan Gilbert, the chair of the Computer and Information Science and Engineering Department at the University of Florida, tells Mic.

He is far from alone in this assessment. Most organizations tasked with ensuring the security of America's elections have shared similar views. In 2018, a study published by the National Academies of Sciences, Engineering, and Medicine determined that paper ballots marked directly by voters were the only way to guarantee the integrity of an election, and said that no votes should be "returned over the internet or any network connected to it."

Voting online is an incredibly tricky proposition because it requires two qualities that are seemingly at odds: verification and anonymity.

Government agencies also have next to no confidence in online systems. With the coronavirus pandemic pushing states and counties to explore new ways to make voting accessible, the Election Assistance Commission (EAC), the FBI, and the National Institute of Standards and Technology (NIST) took the step of issuing a warning of the many security concerns they have identified in internet voting systems. The U.S. Vote Foundation, a nonprofit dedicated to developing new technologies to improve access to voting, has also denounced current iterations of internet voting.

Voting online is an incredibly tricky proposition because it requires two qualities that are seemingly at odds: verification and anonymity. In order to deliver a ballot and ensure that the intended person is the one casting a vote, a voting system must confirm their identity first. But that verification cannot upset the integrity of a person's vote. "Our requirement is that when you vote no one should be able to tie a person to a ballot," Gilbert says. This is considered to be an integral part of any legitimate democratic voting system, as it prevents a person from being influenced by outside forces or from selling their vote.

This is considerably different than how most online verification works. Usually, confirming a person's identity is done to allow them access to information that is directly tied to them. Voting has to accomplish the opposite: verify the person, then hide their vote. "Voting is really hard because of the need for the secret ballot," Ronald Rivest, head of MIT’s Cryptography and Information Security research group, tells Mic. "This makes it very different from online banking, say."

"Secure online voting is not yet possible, and may not be for a long time."

Then there is the security aspect. The prospect of casting a vote on a personal device presents new risks for potential vote manipulation. If a person's device has malware on it, there is the possibility that it could provide attackers access to a person's ballot or allow the attacker to change a person's vote. The systems that are receiving these votes must also be secure, which is far from guaranteed. Even current voting machines that connect to the internet were found to have significant security vulnerabilities when investigated by independent cybersecurity experts.

"Secure online voting is not yet possible, and may not be for a long time," Rivest tells Mic. "It's a nice thing to think about, but we don't have any way yet of making it secure, unless you are willing to trust the vendor entirely, as well as trust the internet entirely."

Despite the general lack of confidence in current technology when it comes to securing internet voting methods, there are efforts trying to push the technology forward. Voatz is perhaps the most noteworthy. The for-profit, private mobile election voting application that started back in 2016 has started to make inroads toward introducing internet voting, regardless of the warnings from security experts.

Voatz, like the early and abandoned effort from the Department of Defense, started by focusing on the military. In 2018, 144 residents of West Virginia living outside of the United States, mostly deployed military members, cast their ballots using Voatz. The program was one of several small trials that the company has been running across the country. To date, Voatz claims to have conducted 67 successful live elections — a figure that includes use during state party elections, student government elections, and town hall meetings, but also state, municipal, and federal elections.

The Voatz system of internet voting is often closely associated with blockchain technology, a cryptography development usually tied to cryptocurrency. When it comes to its use for voting, blockchain is at best controversial and at worst derided as fool's gold. "Blockchain is definitely not viable," Gilbert says. "It will not work.”

Voatz combats this by noting that it is not just a blockchain system. Hilary Braseth, the chief of staff at Voatz, tells Mic that "blockchain is just one piece of the puzzle," and that the company relies on several different technologies that it views as "equally important pieces" to provide secure online voting. "Blockchain is not the golden coin that saves everything," she explains.

The Voatz operation takes place in what is essentially a three-step process. First is verifying a voter, which requires providing a form of identification and confirming one's identity through a biometric check, be it facial recognition or fingerprint identification, the same way one might unlock their phone. After passing those checks, a voter receives their ballot, which they can fill out and submit on their device. After doing so, the voter receives an email as receipt of their ballot. That email contains an anonymized password that only the voter has access to and can use to view and confirm the accuracy of the ballot. Voatz then forms a paper version of this ballot, which election officials at a voter's polling place can record in existing voting machines. Even though the vote was submitted entirely digitally, it is recorded the same as if a person showed up in person and submitted their ballot.

The Voatz system has started to win some approval. Earlier this year, the company's platform was verified as compliant with federal voting system guidelines by an independent voting system test laboratory, marking a step toward further adoption. But security experts are still not convinced. In 2018, researchers at MIT found multiple security vulnerabilities within the Voatz platform. The company has also been criticized for lack of transparency in its system and accused of failing to publish the necessary technical specifications for experts to verify its security protocols. Earlier this year, a report from security firm Trail of Bits reported 79 vulnerabilities within the Voatz platform, one-third of which were considered to be high severity.

The reviews are considerably better from the ground. Amelia Powers, the clerk and auditor for Utah County, has worked with Voatz to extend internet voting to citizens overseas and disabled voters. She says lack of processes and resources in her county, along with instances of people waiting in line for up to four hours, sent her looking for potential solutions to help disenfranchised populations.

"I wanted to make sure that these underserved populations had the ability to vote as we started looking at viable solutions. Voatz was really the only vendor that came to us with a solution that wasn't email or snail mail," she says. So far, her county has seen nearly 1,000 votes cast through Voatz, including one from MacCene Grimmett, a 107-year-old woman who was born before women had the right to vote and has cast a vote in every election since she has been of age. "I would be willing to expand it to other disenfranchised populations," Powers says of Voatz.

Internet voting holds a lot of promise as a tool to address voter disenfranchisement. Phones and computers are largely accessible and could offer another avenue to the ballot for people with disabilities, people without forms of government identification who could confirm their identity with biometrics, people living overseas, and those who would otherwise be asked to wait in excessively long lines to cast a vote.

But securing those processes will be an uphill battle. Few experts actively advocate against working toward these solutions, but they don't want to rush into something that won't work or could undermine the integrity of the democratic process either.

And so the path toward internet-based voting is still littered with obstacles. That will keep many people casting their votes in person and via mail for the foreseeable future. Despite being rife with issues of voter suppression and disenfranchisement, many experts still have more faith in that system, flaws and all, than online voting in its present form.