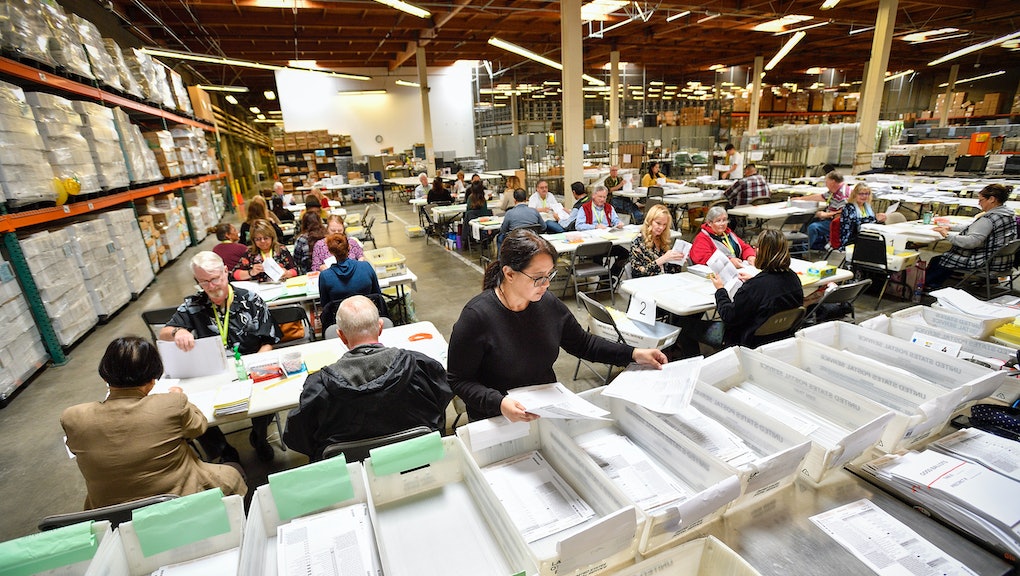 On Tuesday, Wisconsin voters headed to the polls for the state's in-person primary election, despite the coronavirus pandemic that has Americans across the country staying at home almost all of the time. That's because late Monday, the Republican-controlled state legislature blocked efforts by Democratic Gov. Tony Evers to move the election to June and expand access to mail-in voting, so that people could exercise the franchise without risking their health. Evers had issued an executive order postponing Tuesday's election, but it was blocked hours later by the conservative Wisconsin Supreme Court; the decision was then upheld by the U.S. Supreme Court in a similar 5-4 vote split along ideological lines.

Election officials worry about how holding an in-person election during a pandemic might depress turnout — not to mention the fact that the intrastate battle over the election date might have confused voters. In Milwaukee, the state's largest city, there are a meager five polling locations open instead of the usual 180 for voters to cast their ballots.

As it stands, coronavirus concerns have already motivated election officials in 15 states to postpone their primaries. The mess this week in Wisconsin and the similar fates that await in states like Ohio have motivated calls from fair election advocates and federal leaders to start shifting the country to a vote-by-mail general election in November. Officials warn that without a plan to ensure access to the ballot box that doesn't require a voter to show up in person — thus risking their health — we may be heading toward a constitutional crisis.

So why is voting by mail controversial at all? What are the rules surrounding absentee voting? We've broken it all down below.

What is a mail-in ballot?

An absentee ballot, also known as a mail-in ballot, allows a voter to vote by mail from their home. They are sent the ballot and a return envelope, which is usually pre-addressed and pre-affixed with postage; they fill out the ballot at their leisure; they drop it in a mailbox. It’s an efficient way to meet voters where they’re at, and given that we’re in the middle of a crisis where the vast majority of people are sheltered in place, proponents say absentee voting can solve two problems at once: protecting public health while minimizing disruption of the democratic process.

The public health concern is a big one. The Centers for Disease Control and Prevention's guidance on mitigating the spread of coronavirus says that people should limit gathering in groups and avoid staying in enclosed spaces for long periods of time or touching shared surfaces if they can. Voting in person runs counter to all of this guidance.

Additionally, most poll workers tend to be elderly people, given that retirees are more likely to have the free time to volunteer to help facilitate elections. Those over 65 are at increased risk for contracting coronavirus, meaning that holding in-person elections and opening polling places can unnecessarily put the most vulnerable populations at an increased risk.

If we don't require people to physically travel to a polling place to cast their vote, likely interacting with scores of other people in the process and touching shared surfaces, then we eliminate several health risks. The way to do that? Absentee voting.

How are mail-in ballots different from in-person ballots?

There isn’t really much of a difference between a mail-in ballot or an in-person ballot, format-wise. You still get to vote in all of the same categories (local, county, and state races, plus any other initiatives or referendums on the ballot), but some things like signature requirements differ from state to state. For instance, in Wisconsin a witness has to sign the envelope of an absentee ballot, which itself can be risky amid social distancing orders; in North Carolina, two witness signatures are required. A state like California, however, mandates no such signature.

Who can request a mail-in ballot?

There are five states that currently conduct all elections by mail: Colorado, Hawaii, Oregon, Washington, and Utah. In these states, voters automatically receive ballots in the mail without having to request them first; they also provide for day-of voting in person if someone with a disability requires assistance, for example, or if someone misplaced their mailed ballot. The Pew Research Foundation found that in states where all-mail elections are conducted, costs of administering elections decreased, while voter turnout increased.

Other states vary their vote-by-mail rules by county or by election. There are 33 states that allow voters to request an absentee ballot with “no excuse,” meaning that voters can ask for a mail-in ballot without submitting a claim of medical necessity or otherwise proving a specific need to vote by mail. Residents in 17 other states are not so lucky. Voters in Alabama, for instance, have to submit a form to their county board of elections that lists one of the five eligible reasons they’re in need of a mail-in ballot; if they do not meet one of the five reasons, they're not able to vote absentee.

Why do states have different laws about mail-in ballots?

This is where it gets tricky. There is no national system in place for voting by mail (though Democratic Sens. Amy Klobuchar of Minnesota and Ron Wyden of Oregon want to change this — more on that later). Instead, states are left to write their own rules for what voting by mail looks like.

"Historically U.S. elections have been governed by the states," Brett Edkins, the political director of Stand Up America, a grassroots movement committed to ending corruption, tells Mic. The Voting Rights Act of 1965 was the last time the federal government stepped in to facilitate equal access to the ballot box, but the Supreme Court's 2013 decision in Shelby County v. Holder reversed a key provision of the bill, which in turn has allowed states to impose rules that hinder people's access to the vote.

Because every state has been allowed to come up with its own standards, says David Daley, a senior fellow at FairVote, the "patchwork" of laws poses a threat to the fundamental tenet of "one voice, one vote." In the last decade, Daley tells Mic, states have been allowed to enact a number of voting laws, such as laws requiring certain forms of identification or restrictions on early voting. Absentee ballot rules are just another way that state legislatures have co-opted the right to vote. "Unfortunately, this issue has become so partisan," Daley says.

Case in point: One Republican state representative from Georgia, House Speaker David Ralston, cautioned earlier this month against mailing absentee ballots to voters because doing so would drive turnout and be "extremely devastating to Republicans and conservatives in Georgia."

But making it more difficult to vote by mail doesn't impact one party over another, Edkins says. Instead, it just hurts the people. "Voting by mail benefits voters," he says.

In fact, in contrast with other voting restrictions that typically hurt minority or low-income voters that tend to vote Democrat, restricting access to mail-in ballots may do damage to the GOP. Josh Silver, the co-founder and director of RepresentUs, an anti-corruption organization, tells Mic that Republican voters, who tend to be older, might be more likely to stay home on election day out of fear of contracting coronavirus.

We're seeing how complex absentee voting can get in states like Ohio, that decided to move its primary to an all vote-by-mail election on April 28 due to concerns about the spread of coronavirus. There are a number of issues with this, advocates say. For starters, the boards of election in the state aren't set up to mail out and collect back nearly 8 million ballots. Printing and postage costs are also of concern, mostly because the state has never tried to conduct an election this way before.

Moreover, the Ohio legislature decided that election officials would not automatically send out ballots to registered voters. Instead, voters must first fill out and send a form to request an absentee ballot. Given that mail can take 3-5 days to circulate in the same county, it could take a voter at least a week to get their ballot — not to mention the fact that they'd have to know to do so in the first place.

These variables — paper, printing, request forms, mailing, and counting — are complex and generally take a dedicated, coordinated, and years-long effort to navigate. But as coronavirus has abruptly disrupted in-person election procedures, states looking to make the change now haven't had the time to properly prepare for universal mail-in voting.

There's an additional hurdle to instituting mail-in voting for people who have "non-traditional" addresses, like those who live on Native American reservations. And in some states like Georgia, which have a history of rejecting ballots because of signature verification, workers might need more training before being able to reliably and corrective count and verify mail-in ballots.

What would a national mail-in voting election look like?

Klobuchar and Wyden, the two Democratic senators, have proposed legislation that would expand access to both in-person and mail-in voting. It would also require states to establish contingency plans to protect the vote in the case of future emergencies. The duo is proposing $500 million in federal assistance to states to help ready voting systems for this fall's general election.

"We must take critical steps to ensure that states have the resources they need to implement early in-person voting and no-excuse absentee vote-by-mail programs," Klobuchar said in a press release.

The $500 million proposal is a good start, Silver says, but it's not nearly enough to ensure that states will be able to expand and support vote-by-mail systems in November. A fully funded program would call for about $2 billion in federal dollars, he says.

With about 200 days left before the general election, Daley is skeptical that there's enough time to set up a functional national vote-by-mail program. "This is a really heavy lift in 200 days. It’s been years for [other states] to launch and perfect these efforts, and you know, in many cases they’re still perfecting them now," Daley says. "Voting by mail is hard. If we think that we can just snap our fingers ... we’re really wrong."

If we can't do it, then voters will likely face an impossible challenge: to risk their lives to cast their ballot, or miss out on the chance to exercise their right to vote.