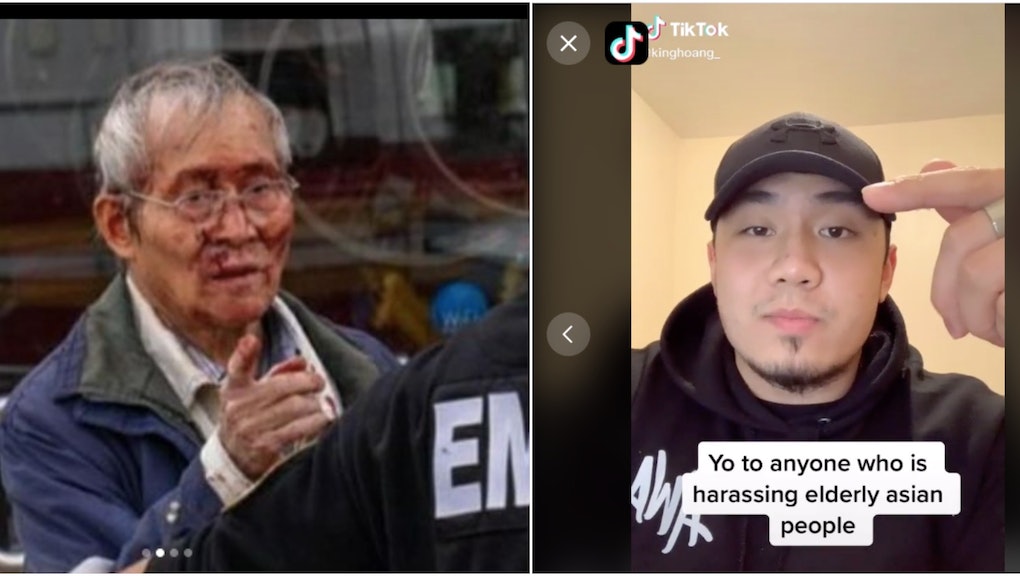 “It’s for the future generation”: How Asians are using TikTok to fight racist violence

On March 1, Danny Padilla, a 28-year-old equity trader from Queens, posted a video on TikTok from an anti-racist rally held in Manhattan several days prior. In the video, actor William Lex Ham stands behind a podium before hundreds of supporters, telling the crowd, “No matter how diverse the Asian diaspora is, as long as we share the same physical features, no matter if we’re Viet, Filipino, Chinese, Thai, Korean… we’re targeted for attack.” Juxtaposed with Ham’s speech are shots of the protesters holding handmade signs that carry messages like “We Belong Here. Hate Has No Home” and “We Are Not a Virus!” The video has over 15,000 views and received over 1,900 likes. Padilla created original sound for the video, a soft ballad that functions as a melancholic soundtrack.

Padilla’s video from the protest is one of many such TikToks with the #StopAsianHate hashtag he’s posted since February, from announcements for upcoming rallies to viral footage of protesters marching in the streets, with hundreds of thousands of likes and tens of thousands of shares.

"A non-Asian creator got inspired by the TikTok and organized her own protest in New Jersey this past Saturday,” Padilla tells Mic. “I was also able to get someone connected with the people organizing their first Boston protest this upcoming weekend. All of this and being able to be in contact with other Asian TikTok creators who are also using their platform to stand up and speak out makes me feel like we have all come together as a community and that we are finally being seen and heard.”

As reports of anti-Asian violence and racism have skyrocketed to nearly 4,000 incidents since the beginning of the pandemic, the most recent apparent instance being Tuesday’s mass shooting of six Asian women in Atlanta, a community of Asian Americans like Padilla has risen up on TikTok. The videos range from real-talk sit-downs to caffeinated lectures to viral reenactments of what it’s like to walk down the street as an Asian American fearing victimization, soundtracked to Kardinal Offishall's "Dangerous." In one video, comedian Mike Kim calls for fellow Asians to "stop fucking stepping on each other" and "rise up." In another, 20-year-old Erin Suh makes the case against reactionary activism. And in another, artist Ren Fernández-Kim and historian Blair Imani offer a crash course in Asian American history. At the time of this writing, the hashtag #StopAsianHate is trending with over 183 million views, inspiring people to speak out about their experiences, call out institutional racism, and better understand the complicated history between minority groups in the U.S.

“Asian hate crimes haven't hit the mainstream until recently — so there wasn't a movement to latch onto,” Kae Kes, a 35-year-old data scientist who lives in Los Angeles and New York, says to Mic. In a since-deleted TikTok from February, Kes says that the media and popular culture have made Asians the butt of every joke for 40 years, including, over the past year, associating Asians with disease. These demeaning recurrences have both consciously and unconsciously stigmatized Asians, and manufactured unwarranted biases against Asians.

The U.S. isn’t the only country where anti-Asian hate crimes are surging. Brandon Cong Hoang, a 21-year-old student in Toronto, highlights global news on TikTok. In a post that’s received over 360,000 likes, he calls out a cyclist who called an Asian woman a “stupid chink” and spat on her in Alberta, and an attacker shouting COVID-19 slurs who threw a 92-year old Asian man to the ground. Whether it’s in the U.S., the U.K., Canada, Australia, or Germany, Hoang shows, anti-Asian racism is happening all over.

Hoang, a 6-foot, 245-pound linebacker of Vietnamese descent at the University of Toronto, tells Mic that while people often give him dirty looks because he is Asian, he does not necessarily fear being attacked on the street because of his size. But he feels that it is important to make videos on TikTok to stand up for others, including Asian elders and vulnerable Asian populations. Hoang has mostly experienced positive reactions to the content he has been posting against anti-Asian hate since February last year. He says he’s made a lot of new friends and connections and found himself in a position “where people were actually paying attention to what I’ve been saying.” Hoang hopes to positively represent Asian athletes on the field and on the internet, representation that he never had himself growing up.

Recently, I was on Live and someone kept referring to me as a ‘bat eater’ and ‘chingchong.’

Other TikTokers have only recently begun to make videos in response to anti-Asian racism. Kayla A., an 18-year-old student in New York City, usually creates lighthearted content about K-pop, fashion, and beauty — a salve, she tells Mic, for the overwhelming negativity on the internet. However, several weeks ago (the same day that Yaeji Kim was attacked with pepper spray in Manhattan), Kayla posted a video encouraging other Asian Americans to speak up. Since then she’s found community on TikTok that has given voice to Asian Americans. “What also amazes me are the non-Asians who come to the defense of the Asian community whenever there is a racist post or distasteful 'joke,'” she says. As much as the response to Kayla’s videos have been “amazing,” she says she hasn’t escaped trolling altogether. “Recently, I was on Live and someone kept referring to me as a ‘bat eater’ and ‘chingchong,’” she says.

We noticed comments that said, ‘We had no idea that these attacks against Asians were happening,’ And then we would share infographics or resources that other people can use to donate to charities.

Still, as with any popular message, corporations have been eager to hop onto the social-justice bandwagon. Nike, ESPN, HBO, Hennessey, and Tommy Hilfiger have posted messages condemning racism and violence against Asians. Users like Hailey Cheng, an 18-year-old Chinese American student with over 350,000 followers in Los Angeles, are not having it. Chang laments that since #StopAsianHate has been trending, “the same politicians and western corporate media sites who demonized Asian people and perpetuated the sinophobic and orientalist rhetoric that fueled all these hate crimes in the first place are now scrambling to virtue signal.”

Spreading awareness through TikTok has also connected Padilla, the equity trader, with family members and friends of victims of anti-Asian hate crimes who saw his videos. He says the aunt of Christian Hall, who was 19 when he was killed by police, thanked him for talking about the issue. She told Padilla how her cousin and his wife had adopted him from China when he was one year old and that he “supported BLM and was a kind loving person. Then [she] asked if I could continue sharing Hall’s petition so that he could get the justice he deserves.” He continues. “[Angelo] Quinto’s friend reached out and thanked me for my activism then said that she cried when she watched the video and shared it with Quinto’s family in the Philippines.”

Abey Lin, a 21-year-old Chinese American musician and filmmaker from the East Bay, has also been active on TikTok, where he’s worked to unite Asian American communities and viewers against hate to "remind people that we are all human, facing the same fate." The videos are a continuation of his work at the start of the pandemic, in February 2020, when he made the short film, Catching Love, which featured people of differing ethnicities repeating the refrain, “I am not a virus.” The goal was to call attention to the anti-Asian racism that was already rampant.

Lin’s community of fellow TikTok creators is comprised of mainly people of color who are what he calls “optimistic creators,” and whose goal is to spread love and positivity through their content. One way that Lin and his fellow creators get out their message is through the power of collaboration. “Me and a few other super amazing content creators came together to make an awareness video,” he tells me. The video, which was posted by U.S. national team gymnast Elena Shinohara, among other creators, has over 26,000 likes, 1,000 comments, and 2,000 shares. “We noticed comments that said, ‘We had no idea that these attacks against Asians were happening,’” Lin says. “And then we would share infographics or resources that other people can use to donate to charities.”

"This is what's been happening toward my people," says Hoang, the linebacker, in one video. "I'm not doing this for me — it's for the elderly people, it's for the vulnerable, it's for the future generation of kids so they can grow up and be proud to be Asian."