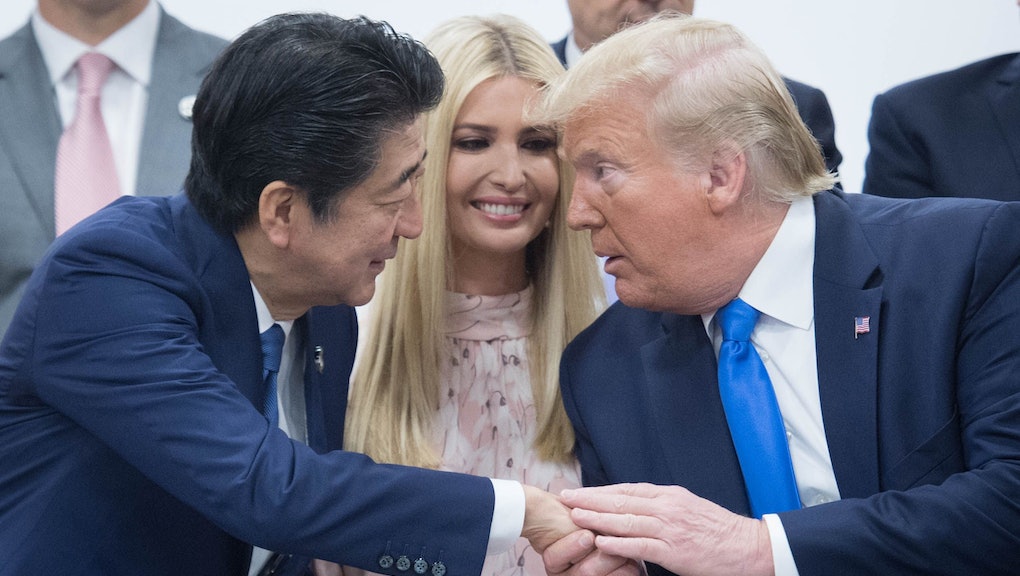 As the president's daughter and one of his official advisors, Ivanka Trump often accompanies her father to major political events, including meetings related to international diplomacy. But just because she's allowed to attend these high-profile events doesn't mean she's always encouraged to participate. In a video taken at the recent 2019 G20 Summit, Ivanka Trump can be seen trying, and failing, to join in on a conversation held between several world leaders at the Osaka, Japan gathering.

In the video, released by the French presidential palace on June 29, the 37-year-old is shown attempting to include herself in a talk between French President Emmanuel Macron, Canadian Prime Minister Justin Trudeau, British Prime Minister Theresa May, and the head of the International Monetary Fund, Christine Lagarde. It's a painful situation to watch; throughout the conversation, Trump simply parrots what the others are saying, and when she eventually attempts to input her own thoughts, she is barely acknowledged by the rest of the group.

It's a very awkward encounter, and understandably, the video of Trump's cringeworthy moment quickly went viral on Twitter. But more importantly, the interaction (or lack thereof) has seemed to serve as the best example yet that international diplomacy isn't a skill that just anyone can, or should, have.

After the video hit viral status, a reporter called for people to Photoshop images of the president's daughter as "the unwelcome interloper boxing way above her weight" in different situations using the hashtag #UnwantedIvanka. Naturally, the request garnered an onslaught of hilarious images of Trump plopped into famous moments and scenes, ranging from the Mona Lisa to the assassination of Abraham Lincoln to the storming of Normandy.

There was Trump as a member of the Beatles, in the cast of Friends, and in some iconic movie scenes and artwork:

There was Trump in the Sistine Chapel:

There was Trump as the fifth friend in Mean Girls:

There was Trump ready to offer an umbrella in that pivotal moment of the Notebook:

Basically, if you can remember something happening, Trump has probably been Photoshopped into that moment. But as fun as the memes are, the moment of Trump's failed diplomacy also points to a more serious issue. Someone who is completely unqualified is trying to rub arms with world leaders, and it seems obvious that a person more qualified than Trump — whose previous experience includes managing a fashion company, but not politics — should have been tasked with talking to representatives of America's strongest allies instead.

Late on June 29, New York Rep. Alexandria Ocasio-Cortez tweeted about the video, clearly not impressed by what she saw of Trump's conversation skills. "It may be shocking to some, but being someone’s daughter actually isn’t a career qualification," Ocasio-Cortez wrote. "The US needs our president working the G20. Bringing a qualified diplomat couldn’t hurt either."

California Rep. Eric Swalwell, who is running for president as a Democrat in 2020, also called out Trump's presence at the G20 Summit. "This is your reminder that Ivanka Trump has no foreign policy or diplomacy experience," Swalwell wrote. "The American people deserve to be represented by a qualified diplomat... not the president's daughter."

On Monday, the White House released a statement condemning the reactions to Trump's attendance of the G20 Summit. “It is sad but not shocking that the haters choose to attack Ivanka Trump, a senior advisor to the President, when she is promoting U.S. efforts to empower women through strategic partnerships with world leaders," deputy White House communications director Jessica Ditto told The Hill in a statement.

A press official from the French presidential office, meanwhile, told Politico that they "didn’t anticipate the reaction" the clip would get after the office posted it, and that they are "not responsible" for the memes that the video has inspired. The official made clear that the office had no idea the video would be used online the way it was, but they did admit that it has caused "a larger narrative in the U.S. about Ivanka’s diplomatic role and that goes beyond us, of course."

More like this
Ted Cruz, you dunce, you Eddie Munster-looking nincompoop, it's time to log off
By Rafi Schwartz
The U.K.'s biggest asshole is crossing the pond to join the goblin army at Fox News
By Rafi Schwartz
Insurrection enthusiast and acid trip 'Batman' villain Roger Stone got served court papers on live radio
By Rafi Schwartz
Stay up to date