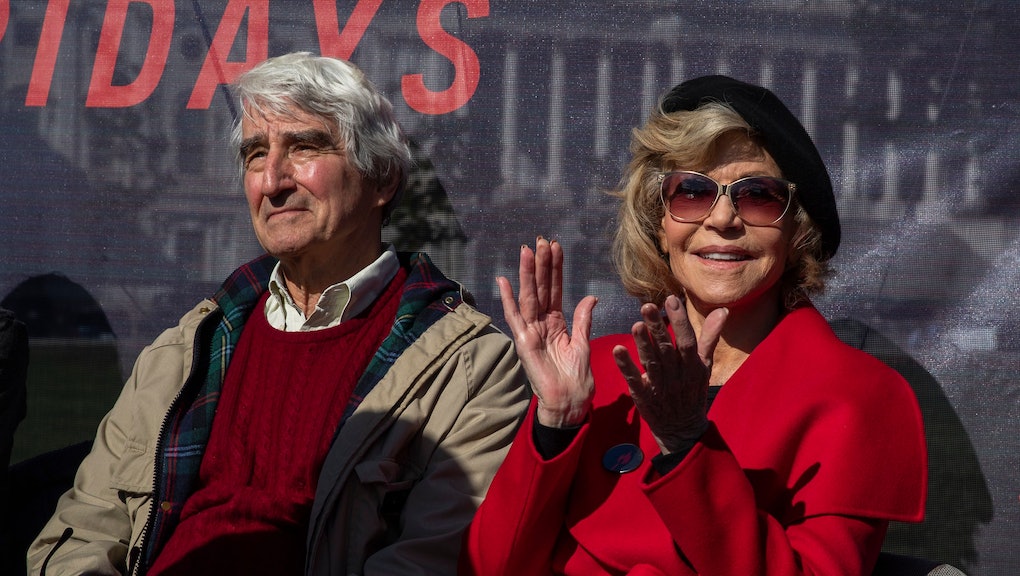 Two of the stars of Netflix’s Grace and Frankie were detained by police while protesting outside of the capitol building in Washington D.C. Jane Fonda (Grace) and Sam Waterston (Saul) were arrested alongside other protesters on Friday morning while they were protesting for more rapid response to the climate crisis.

For her part, Jane Fonda has been an activist her entire adult life. She’s protested for civil rights and against the Vietnam War and is no stranger to getting arrested for the causes she stands behind. She was also arrested at another climate protest on October 11. Fonda says she has been inspired by the actions of the youth climate strike and plans to continue protesting for the next four months.

"I will be on the Capitol every Friday, rain or shine, inspired and emboldened by the incredible movement our youth have created," Jane Fonda wrote on her website. "I can no longer stand by and let our elected officials ignore — and even worse — empower — the industries that are destroying our planet for profit. We can not continue to stand for this.”

Waterston has been less politically active and is best known for his role as ADA Jack McCoy in Law and Order. An NBC News reporter covering the event tweeted that unlike Fonda, Waterson says he’s never been arrested.

For those familiar with Grace and Frankie (and if you’re not, you should be!), it would be very out of character for Fonda’s haughty Grace to be seen protesting outside of any building, especially for climate change. But for Waterston’s forever-hippy Saul, it would definitely be part of his daily routine to be causing a public ruckus in this political climate. In this instance, the actions of celebrities are actually much better than that of the characters they play.